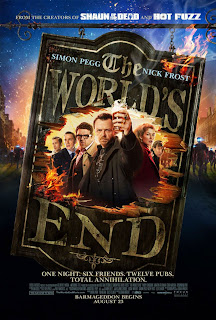 Ah, so this is why they say you can't go home again...

Gary (Simon Pegg) returns to reunite his friends and complete the Golden Mile, a marathon pub crawl in their hometown.  Their first attempt over 20 years ago was met with failure, but this time Gary is determined that they'll reach the final pub, The World's End.  However, the gang has all moved on and a pub crawl isn't high on their list of things to do.  One of them, Andie (Nick Frost), doesn't even drink anymore.  The rest aren't too wild about Gary and the fact that he hasn't grown up at all.  The impulsive and talkative Gary manages to convince them though.  They hit a series of pubs before they start to notice that things are a little off since the last time they were in town, and then it gets weird.

I'm not sure how many of you have seen the trailer for The World's End, or if you're a fan of Edgar Wright and Simon Pegg's previous collaborations (which I've just learned is called the "Cornetto trilogy").  The reason I bring this up is that the movie takes a significant turn around the halfway point that I don't want to spoil, but anyone that's seen the trailer or is familiar with their previous work will likely be aware already.  I'm going to err on the side of not spoiling though and be a little more vague and a lot less wordy than usual.

Spoilers or not, it isn't going to ruin your enjoyment of The World's End.  Once things get going, it's a ton of fun.  If you aren't laughing at the situations they find themselves in, then the dialog will get you.  The thing I love about the Cornetto trilogy is not just how well written they are, but how it's clear that Simon Pegg and Edgar Wright love the genres they're riffing on.  There's so much attention to detail and subtle references to other films.  Even Paul, which was written by Pegg and Nick Frost, is full of sci-fi references.  Fans are rewarded with multiple viewings of these films, and I think The World's End will be no exception.  I was recently shown a clip from Shaun of the Dead where the opening scene brilliantly spells out exactly how the movie is going to go.  It's the kind of thing I didn't notice the first time, or even second time I watched it.  I've already heard about a few things from The World's End that I didn't pick up the first time around.

Another thing that makes these films stand out is that there's more to them than clever dialog or genre references.  Like some of the better Judd Apatow comedies, there are underlying themes that give them meaning and more to connect with.  As you learn more about the characters and what's really going on in their lives, you see what's really driving them.  People that aren't necessarily sympathetic at the beginning are by the end.

Much of the cast from the previous Cornetto films return or have small roles in The World's End.  From working so much together, they have great chemistry and play off each other like old pros.  They really do seem like genuine friends.  Rosamund Pike joins the cast to give it a jolt of estrogen.  I've always enjoyed Pike, but I really her taking a stab at comedy from the usual drama/thrillers she's in, and no, Johnny English Reborn does not count.

If you're a fan of Shaun of the Dead or Hot Fuzz, then you'll also love The World's End.  I'd say it's probably somewhere in between those two films a far as overall quality, but your mileage may vary.  Even if you aren't familiar with the Cornetto trilogy, there's a lot of fun to be had, and it's one of the better comedies of the year.  I strongly recommend checking it out, and maybe even getting a pint or two to really put yourself in the mood.