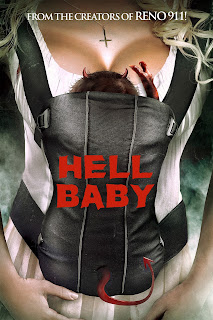 I'm a big fan of the guys from The State and most of their subsequent projects, like Reno 911 and Stella, so I was eagerly looking forward to Thomas Lennon and Robert Ben Garant's Hell Baby.  It also didn't hurt to hear Riki Lindhome talk about her nude scene on various podcasts like Doug Loves Movies.

Maybe I had set my expectations too high, but I can't tell you how disappointed I was after watching Hell Baby.  I just don't get it when a movie involving so many talented and funny people at every level can make a movie that I found devoid of anything funny.  I'm not kidding either; in the entire 98 minutes I had a slight chuckle once.  It's an example of trying so hard to parody everything about a haunted house film that it ends up failing miserably.

Vanessa (Leslie Bibb) and Jack (Rob Corddry) move into a run down home in New Orleans while they await the birth of twins.  They quickly learn from their neighbor, F'Resnel (Keegan Michael Key), that the house has a host of nicknames involving death, as well as several murders that occurred there.  I guess the disclosure laws are pretty lax in Louisiana, but whatever.  Seemingly within moments after moving in, Vanessa already begins to exhibit unusual behavior, and the typical trope of boxes stacking themselves happens. Vanessa begins to smoke and drink heavily, 'cause fetal alcohol syndrome is funny.  The story doesn't have much of a setup, let alone any mythology or end goal like a normal horror film.  I can forgive that if I'm laughing so hard that I forget to care.

A pair of priests (Lennon and Garant) and dispatched to help, even though Vanessa and Jack haven't asked for it yet.  When told about the case, they are informed they are already 'playing catch up'.  This would only make sense if this scene happens later on in the film, but this is within the first ten minutes.  Was this a massive mistake in editing?  After arriving in New Orleans, the priests seems to be more interested in eating, checking out the French Quarter and looking at boobs than getting on the case.  They also smoke, work out a lot and dress like the Men in Black meet The Blues Brothers.  I hate to get nitpicky about plot details, but this is all I have at this point.

Much of the humor in Hell Baby consists of repeated gags and silly scenes that drag on and on.  There's one gag where Jack gets shocked by an old lamp he's working on, but I'm trying to figure out why he's continues to work on a lamp that's plugged in.  There are multiple scenes of people orgasmically eating po'boys, complete with burps and farts; I'm not sure what was supposed to be funny about that.  There's an old, naked lady (which was really just someone wearing an awful looking naked suit) that shows up throughout the film.  A pair of boneheaded cops (Rob Huebel and Paul Scheer) question Jack on multiple occasions and call him names like 'Einstein' or 'Mozart' for no reason.  F'Resnel lets himself in through a window on a whim and always accidentally scares Jack.  Then, there's a chain vomiting part that goes on forever.  This all culminates with a scene where a room full of adults freak out and play hot potato with a devil baby.  I kept waiting for any of these scenes to go somewhere or have some kind of payoff.

Even Lindhome's nude scene goes on for way too long, and has no point other than to have more nudity.  Apparently her character isn't ashamed of her body, but Jack is uncomfortable around her naked sister-in-law.  Go figure.  I never thought I'd see the day where I'd complain about a pretty girl getting nude, but I don't know why Lindhome agreed to do this.  She has a great body though.

I get it, comedy is hard.  Not everything is going to work, and I'll admit that maybe I'm not the right audience for this or wasn't in the right mood to watch it.  I don't mind silly or lowbrow humor, but this didn't work for me at all.  Hell Baby feels like something that was shot over the course of a few days without much of a script.  They weren't sure what direction they wanted to take it, so they just let all the actors wing it.  This is one of the reasons why I'm so hard on recent Adam Sandler films.  With this much comedic talent, you'd think they could knock it out of the park with ease.  At least everyone felt committed to the material.  I'm sure they were laughing their heads off while filming.

It occurred to me afterwards that Hell Baby is something I would've really loved when I was 15 or 16.  Back then, this would have killed me, and the nudity would have excited me more.  I like these guys, so I don't want to beat them up too bad.  It's not like they've lost a fan.  I'm hoping their next work will slay me.

Hell Baby is a disappointing, uninspired film from comedy pros that I was expecting a lot more from.  Meant to be a parody of haunted house/possession films, it's a silly farce with repeated gags that run on and on and on.  I'm not even sure if large amounts of alcohol or drugs could help it.  I really wish I could recommend it, but I can't.  This is one to take a pass on.