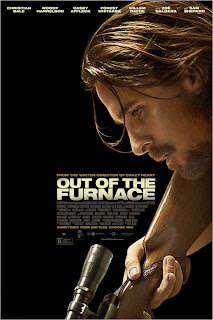 Out of the Furnace opens and closes with a nondescript Pearl Jam song.  It sounded like a slower version of "Elderly Woman Behind the Counter in a Small Town" combined with "Dissident", only with more Vedder mumbling.  The credits listed it as "Release", and twice for some reason.  Were they different versions of the same song?  Is this something that only the most detailed-oriented Pearl Jam fans would notice?  My friends that are fans will probably be mad at me for saying so, but was their music always so generic and depressing?  Am I remembering their early stuff wrong?  I had to do some research to find that "Release" was a hidden track from Ten, an album that I still own, but I guess I don't have a version that has "Release".

Look at that, one paragraph in and I'm already way off topic.  I bring this up because the song really seemed to set the tone for the film, and not in a good way.  Out of the Furnace is a film I've been looking forward to for a while though.  The cast alone intrigued me, but this is also the next film from Scott Cooper, whose directorial debut was Crazy Heart, a film I enjoyed a great deal.

Russell Baze (Christian Bale) works in a factory in a very small town in the Northeast.  When I first heard his name, I heard it as "Blaze", which would have been so much cooler.  He's close with his younger brother Rodney (Casey Affleck), who's on active military duty, but also appears to have a gambling problem.  They have a sick father that they both look after as much as they can.

One thing that struck me as a little odd was that based on the town, the cars, and overall look of the film, I thought this took place in the 70's.  Even the very opening scene is set in a drive-in (where I didn't recognize the film playing as The Midnight Meat Train).  You then see a TV broadcast from a Democratic primary referring to electing Obama, so that would mean this is more like 2008.

While driving drunk, Russell hits a car that's backing out of a side road.  Now I'm not condoning drunk driving, but the way the accident was presented, it seemed like the kind of accident that could have happened to anyone, especially late at night when you take your eyes off the road for a second.  Russell is sent to prison, and here's where I started having issues with the film's concept of time and glossing over things.  We see no trial, and I don't think a single mention of the length of his sentence is made.  We jump straight from the scene of the accident to him already being in prison.

Once in prison, he keeps his head down and tries to get back on track.  For some reason, another inmate decides to pick a fight with him, but there didn't seem to be any purpose to this.  It wasn't the start of a string of fights, or something that forces him to join a gang.  There's no consequence to this, so you watch it and think, "Okay, that's something that happened."  In pretty much the very next scene, he's out of prison already.  We still don't know how long he was in.  Many details like this throughout the film are skipped without any explanation or development.  It as if Out of the Furnace was originally intended to be a much longer film, and then had to cut a bunch to get it under two hours.  In fact, this would have been an interesting series on TV, where you could have spent more time developing the characters, time with Russell in prison, Rodney's military service, their relationship with their father, etc.  It felt very underwritten as is.

Anyway, Rodney's military service is done, but is having problems finding work, so he turns to the shady world of underground fighting.  You'd think that this was something that Russell could have gotten involved in, as he also might've had a hard time finding work after prison, and sometimes inmates take up boxing.  Instead, Russell urges Rodney to get a job at the factory and not get mixed up in that world.  Against his friend John Petty's (Willem Dafoe) judgement, they take a fight ran by Harlan DeGroat (Woody Harrelson), a psychopath you don't want to find yourself owing money to.  Rodney goes missing and when it appears there's not much the authorities can, or will, do, Russell goes looking for him.  At this point, you think the film is finally going to pick up and become some kind of revenge thriller, but it builds no tension at all.  That's really the biggest problem with Out of the Furnace; it's slowly paced and doesn't go anywhere satisfying.  The entire tone of the film is very dour.

Out of the Furnace does have a great cast and is well acted though.  Christian Bale is great as he always is, but this is slow pitch softball for someone of his skill.  Casey Affleck as also good, as is Sam Shepard and Willem Dafoe.  Zoe Saldana is in the film briefly, and shares a very emotional scene with Bale after Russell is released from prison.  I heard many people crying around me during the scene, but I had no emotional connection with the characters at this point.  This is mainly because Saldana's character is not developed at all beyond being "the ex-girlfriend."  You see very little of their relationship before Russell goes to prison, and by the time he's out, she's already moved on and now hooking up with the local police chief (Forest Whitaker).  One of the best and bright spots of the film was Woody Harrelson, whose inspired performance make him feel like a rabid animal.  It's a reminder of the rule that it's more fun to play the bad guy.

Out of the Furnace is a gritty looking film and dependably acted, but its plodding pace and lack of tension prevents it from having any real effect or impact.  It simply fizzles out and unfortunately ends up being something very forgettable.  It's not the worst thing in the world, but better saved for rental.