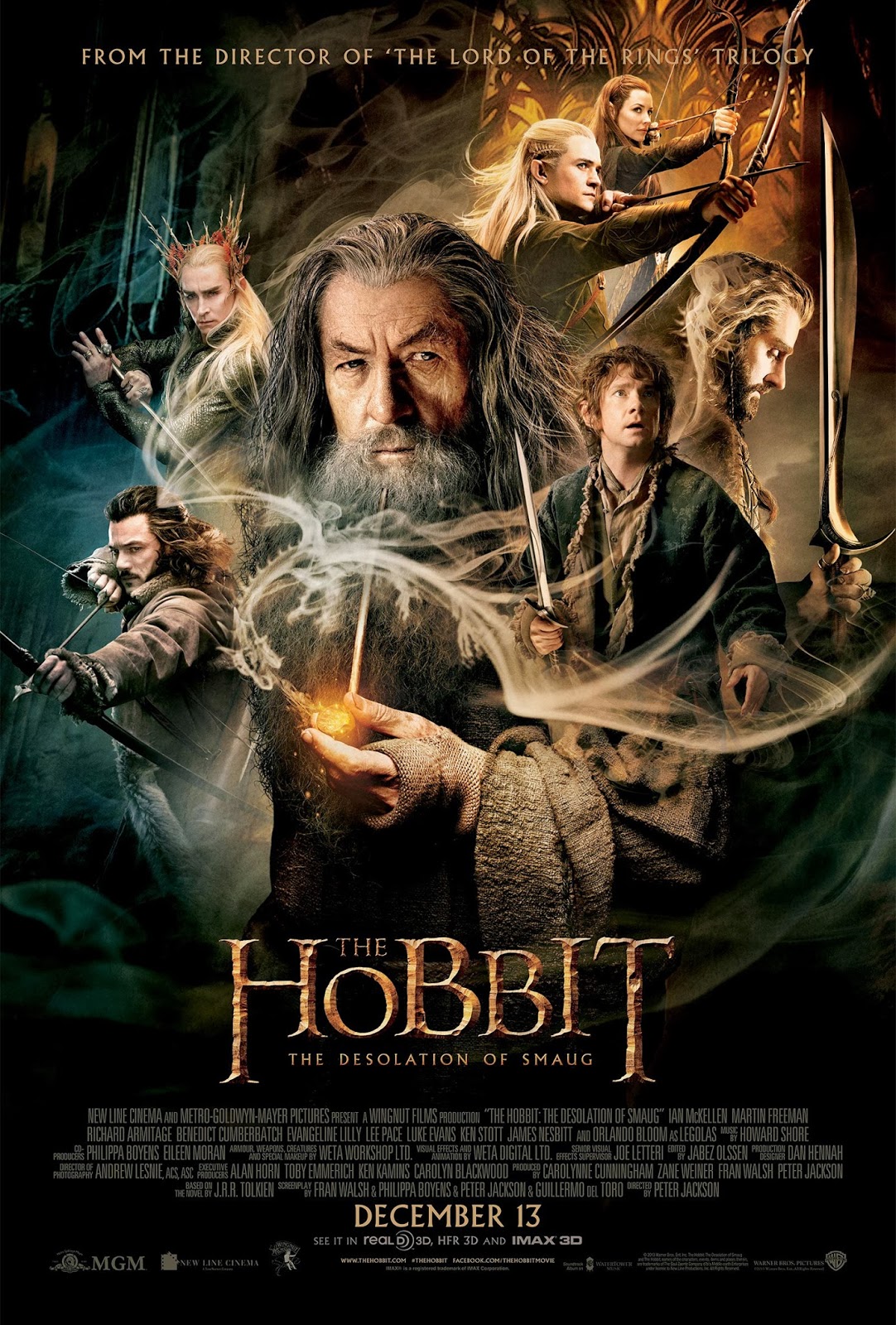 Just remember, if you're not tired of The Hobbit yet, there's still three more hours on the way.

I mentioned in my The Hobbit: An Unexpected Journey review that I haven't read the book this is all based on (loosely, I suppose).  That hasn't changed in the past year, so once I again I can't comment on the faithfulness to the source material.  I don't necessarily have any issues with some of the newly added characters or plot points that seem to be more of a reference to The Lord of the Rings trilogy than having anything to do with The Hobbit.  In some cases, they were a good thing, like with the addition of Evangeline Lilly's character Tauriel.  She's a total badass and gives the audience a strong female character to identify with.  It doesn't hurt that she's super hot dressed up as an Elf.  I think she might have replaced Antje Traue's Faora from Man of Steel as my current nerd crush.  I liked her character so much that I would totally support and happily watch Tauriel: Badass Elf Chick.  I liked how they brought Legolas (Orlando Bloom) back into the fray, as he got some really cool action scenes that showed more of a ruthless side that wasn't necessarily seen in the original films.

I don't figure there's a lot of need to get into the plot.  The Desolation of Smaug isn't so much a sequel than the continuation (more like extension) of a story that really could have been told in a single film, but whatever.  Smaug and An Unexpected Journey could have easily been edited into a single, three hour film, but for some reason I was never bothered by the length or pacing of either.  If you've followed my blog at all, you know that I tend to pick on a movie's length or pacing a lot.  Simply put, I enjoy this world so much and hanging around in it that I don't want them to end.  Hell, I've already sat through the Extended Edition of An Unexpected Journey twice already, even though it didn't expand on the story the way the Extended Editions for The Lord of the Rings trilogy did.  You don't even have to twist my arm to say that I've enjoyed the The Hobbit movies far more than the Star Wars prequels.  The Hobbit is how you make a prequel trilogy and throw in references to the originals.

The real question I think most people will be asking is do we finally get to see the dragon in this one.  Well, we do and it's glorious!  Smaug (voiced by Benedict Cumberbatch) is easily the best looking dragon ever seen in a movie.  It's not just a quick shot either.  We get an extended look and he plays heavily during the last part of the film.  The wait was worth it.  Although, I will add this, why is it so hard for a giant, fire-breathing dragon to kill a bunch of halflings?  Shouldn't he have been able to kill them like fifteen times each?

Overall, the special effects had more polish to them when compared to the first film.  There were times in Journey where it looked too much like a computer game, but I didn't get as much of that here.  I think a lot of that look was due to the high frame rate used.  I saw Smaug in IMAX 3D with the high frame rate, and there were still times where it still had that artificial, sped-up look.  I thought it was much less noticeable though, but I can see how some viewers may still have an issue with it.  If you're on the fence about what format to see it in, you should probably err on the side of avoiding the HFR screenings.  I liked the 3D though and don't have a problem recommending it.

Another reason I enjoyed Smaug so much is that there's a lot more action.  Journey took close to an hour before anything happened, but there's less setup in Smaug and more getting to the very creative and fun action scenes throughout the film.  The "barrel scene" has a almost Rube Goldberg feel to it, as did another scene later in the film.  Again, there there are many scenes with Tauriel and Legolas where they get to kick ass.  There are arrows to the head and beheadings galore.  Oh, and there's no musical sequences this time around.  It's not that I dislike them, but they're not always my thing or don't necessarily fit well in the story.  I also appreciated that there was less corny humor.  The whole tone of the film is much darker.

It isn't just better effects and action though.  There were many character moments I appreciated.  In particular, I liked how they took time to show how Bilbo (Martin Freeman) is slowly getting corrupted by The Ring.  I enjoyed how Thorin (Richard Armitage) was developed, and I came away liking him bit a more than I did after Journey. Many of the company of dwarves get to show more personality, especially with Kili (Aiden Turner), who is one of the few characters that gets a love interest.  If there was any disappointment I had it's that Gandalf (Ian McKellen) took a bit of a back seat in this chapter.  I'm assuming he'll be back with a vengeance in the final chapter.

I had a lot of fun with The Hobbit: The Desolation of Smaug.  Sure, it's too long, and purists will have issues with the story, but it's still an improvement over An Unexpected Journey.  If anything, it gives fans another opportunity to hang out in Middle-earth while providing more of the action and spectacle that made The Lord of the Rings trilogy so entertaining.  Plus, there's a dragon...