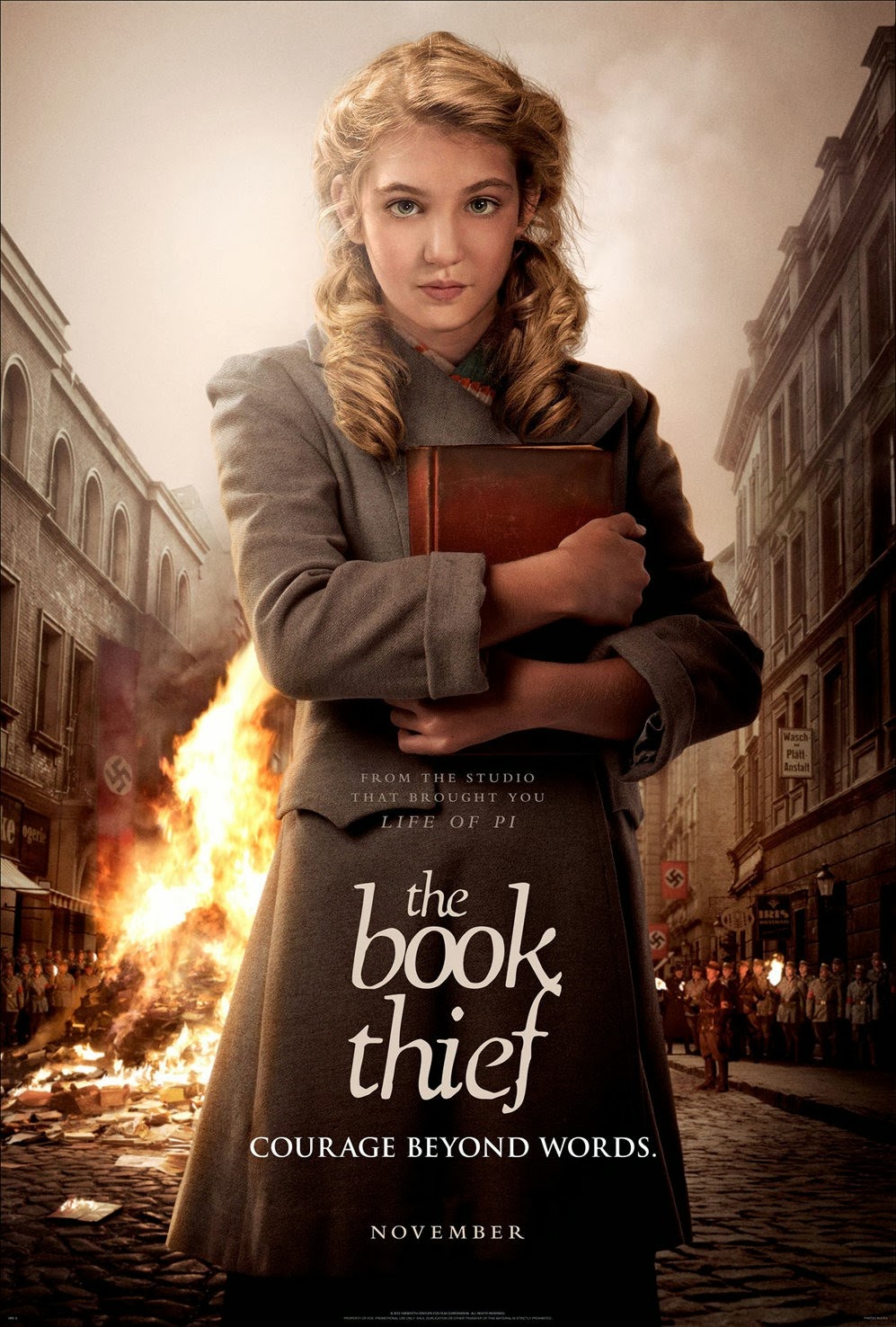 Leave it to classy, English narration (by Roger Allam) to make a film set against Nazi Germany and WWII practically feel like a whimsical fairy tale.  When you finally realize who's narrating the film, it adds another layer of darkness to a film that already had a thread of it throughout.

What I'm trying to get at is after watching The Book Thief, I was a little perplexed by its tone.  There's the cloud of WWII and the threat of being discovered by Nazis throughout the film, but it's always kind of in the background.  In one scene there's a children's choir singing a seeming beautiful song against several Nazi flags, which was an interesting juxtaposition as it is.  Then, you see that the subtitles for the lyrics reveal they are singing Nazi propaganda, and it comes off as funny, rather than being shocked at children being made to sing this so young.  Later, there's a book burning scene that felt more like a fun community event, rather than the repressive thing it should have been.

Liesel Meminger (Sophie Nelisse) is on a train with her brother to meet her foster parents.  Sadly, her brother dies en route, further setting the dark tone in the opening minutes.  Her foster parents Hans (Geoffrey Rush) and Rosa (Emily Watson) have a good-cop/bad-cop relationship when they first meet.  Hans does his best to make Liesel feel at home, while Rosa is the strict one.  It's discovered that Liesel does not know how to read or write, but Hans teachers her, and Liesel becomes a sponge, reading everything she can get her hands on.  She's also able to make friends with a neighbor, Rudy Steiner (Nico Liersch), and the two of them become very close.

Later, Hans and Rosa give shelter to a Jewish man, Max Vandenburg (Ben Schnetzer), who's avoiding capture by the Nazis.  While hiding in their home, Liesel and Max share stories and Liesel reads to him after he becomes sick.  After the previously mentioned book burning event, the mayor's wife, Ilsa (Barbara Auer), sees Liesel recover a book from the fire.  Rather than punish Liesel, Ilsa invites her into their home and allows her to read from their extensive library.  After their relationship is ended by the mayor, Liesel continues to sneak into their home and borrow their books, hence the title.  That title is a bit of a misnomer, but I suppose The Book Thief grabs your attention more than The Book Borrower.  She only actually steals one book that I can recall, so "Thief" seems like a bit of an exaggeration.  You wouldn't call a guy that's only been to the gym once a bodybuilder or powerlifter, would you?

Where The Book Thief's heart lies are within Liesel's personal relationships.  This is why the film is effective.  Her relationship with Hans is particularly sensitive and touching, and it anchors the film.  Even her relationship with Rosa eventually warms the longer they are together.  Her friendship with Rudy is cute and humorous, and you see their blossoming puppy love.  It's also nice to see how she bonds with Max as they share stories.  There's a light tone to all of these relationships to contrast the real world events happening around them.  The film is also peppered with humor, like the subplot with Rudy idolizing Jesse Owens and his desire to become the fastest man alive.  The issue for me was that all of these lighter moments kind of took away from the seriousness of the time.  It makes some of the later events feel a little too dramatic, but I will say there wasn't a dry eye in the theater by the end.  I can't remember too many films where I actually saw people passing napkins to strangers to wipe their eyes.

At over two hours, the length was a little much.  I also had a little bit of an issue with how they handled the passage of time.  Several years go by over the course of the film, but to the audience it only seems like these events took place over a few months.  It doesn't help that nobody seems to age.  It's a minor complaint though, and there's likely not much that could have been done about aging the kids without casting different actors, which would have been jarring.

There are very strong performances though.  Geoffrey Rush is great and his sweetness toward Liesel makes it extremely easy to connect with their relationship and invest in it.  Emily Watson is dependable as always, and as mentioned before, I always like seeing a relationship defrost over time.  Rosa goes from looking at Liesel as a kind of burden to becoming a loving parent.  A film like this works best when you like and get good performances out of the child actors, and I enjoyed both Nico Liersch as Rudy and and Sophie Nelisse as Liesel.  I can't recall seeing Nelisse in anything else, but she really stands out and it's the kind of performance where you expect to see bigger things from her down the line.

The Book Thief has issues with the length and inconsistent tone, but still works based on the strong performances and character relationships that are the focus.  I'm not sure how people that have read the book will receive this, but it's effective as a more serious, family film.  Definitely worth a rent sometime.