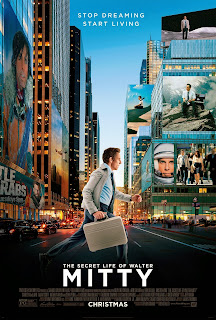 The Secret Life of Walter Mitty is brought to you by Papa John's, eHarmony and Cinnabon.

I've never had huge problem with product placement in a film, and I understand the need for it.  In some films it can actually help sell the setting when you see businesses and brands that are common.  "Oh, this is taking place in our world."  Then there are times where it's just so in your face that it becomes distracting or takes you out of the film.  In one particular scene Walter Mitty and eHarmony Customer Service Rep Todd (yes, an actual character in the film played by Patton Oswalt) are scarfing down some Cinnabon while commenting about how great it is and it's sex/drug like qualities or something to that effect.  Earlier on, they make a point to have Walter say his first job at 17 was at a Papa John's.  This is interesting since Papa John's was founded in 1984, which if Walter was the same age as Ben Stiller's actual age, the earliest he could have got a job there was at 19.  However, I'll allow them that Walter Mitty could have been in his early 40's rather than pushing 50.

I'd have an easier time with this kind product placement if the companies featured weren't so awful.  Cinnabon can barely be called food, and Papa John's is one of the worst pizza chains around.  Don't get me started on eHarmony.  When I was on eHarmony there wasn't any wink functionality (it's actually called "Send a Smile" now).  In fact, eHarmony didn't even give you the ability to browse users.  I suppose their customer service policy has changed as well, as eHarmony service reps will call you at any time to help you out.  I'm sure much has changed since I last wasted my time there though.  I'm was just surprised with such an overbearing presence that they got little details like this wrong.  Oh, and if it's not clear, I really dislike online dating.  I did it for a lot longer than I should have and found it to be a giant waste of time, but that's a conversation for another time and place.

Anyway, if you're still reading after another one of my tangential rants, then I thank you for your patience.  Based on what I've written so far, you're probably thinking I really didn't like The Secret Life of Walter Mitty, but I probably liked it more that most considering all of the mixed and negative things I've heard about it.  Then again, you know how it is going in with really lowered expectations.

When Walter Mitty (Ben Stiller) zones out, wild fantasies play out in his head.  In the real world, Walter is a pretty shy person that knows how little he's done with his life.  He's not a complete loser, working a good job at Life Magazine for 16 years, but that's in jeopardy now that Life has been bought out by a company that intends on turning it into an online magazine.  They have the privilege or publishing the final issue, and are expecting the cover photo to be provided by ace photojournalist Sean O'Connell (Sean Penn), but this photo seems to have gone missing. Walter needs to find it asap or it's going to cost him his job.  Using clues from other recent photos, Walter sets out to track down Sean and recover the photo.

In essence, we have a story about a guy that daydreams of doing amazing things that finally gets an amazing adventure of his own. While some of Walter daydreams were interesting to watch, they weren't grounded in any kind of reality, and some felt like they were done more for laughs.  Walter's real adventure was much more engaging and inspiring.

It is also a gorgeous looking film, and a lot of it is due to the Earth's natural beauty.  I thought the visual effects were a little rough in a few parts, like a bad looking great white shark (and I'm pretty sure white sharks don't migrate that far north).  However, it's the kind of film where I can forgive some lackluster CG due to the rest of it looking so good.

Unfortunately, as we get towards the end some pretty glaring plot hole and consistency issues arise.  You may want to skip ahead to the next paragraph if you want to avoid anything spoiler-ish.  Throughout the story, I thought the whole missing photo was set up intentionally by Sean to get Walter out of his head and out in the real world, like a final gift to him.  Instead, it turns out to be a misunderstanding that makes you smack your forehead with it's simplicity.  A lot of trouble could have been saved if Walter had just been thorough with a particular item.  Another issue arises when the final image is revealed.  When you see that image, you'll wonder why Sean didn't recognize Walter when they meet.  Was he playing dumb?  Was Sean also not able to piece it together?  Plus there are also some issues with time and distance in respect to Sean and his photos.  Finally, calls are made by people without regards to timezone or location when you'd think they'd likely be asleep.  It all makes the ending feel a little too forced and tidy rather than have the emotional payoff it could have had.

I liked Ben Stiller's performance though, and I tend to forget he's a capable actor when forced to something dramatic.  While I get a little tired of when he plays these meek, ineffectual types, it worked well for the type of person Walter was and to show some growth.  As much as I love Kristen Wiig, she's really underutilized and there's just not that much to her character.  One of the interesting things about Adam Scott, other than sporting one of the oddest looking fake beards I've seen, is that he's pretty convincing being able to play a nice, affable guy on something like Parks and Recreation and then pulling off a character like he does here where you want to him get hit by a bus.  I would have liked seeing a little more of a dynamic between his character and Walter, but he's not much more than a one-dimensional bully.

The Secret Life of Walter Mitty is an ambitious, mixed bag of a film.  There are some great visuals and nice messages about getting out there and living life, but ultimately there's not much to connect to and some plot issues that were a little too messy for my tastes.  It's still a pleasant enough family film that makes for a decent matinee or something to rent.