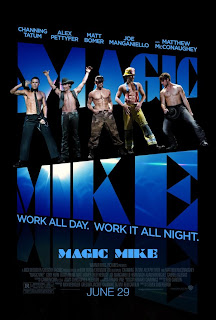 I've heard numerous complaints that this movie is a bit of a bait and switch.  I'd have to say after watching Magic Mike that they are right.  At no point in this movie did I see the use of magic anywhere in the film!  How do you have a movie with "Magic" in the title and have none of the typical fantasy elements?  I feel duped...

I kid, but I can see why some might feel a little let down.  The advertisements made it look like it was going to be more of a wild party movie, and while there is plenty of eye-candy with all of the hairless, glistening abs, what you got was a deeper look at the life of someone actually trying to get out of the business.  Oh, and there's just as much eye candy for the men as for the women.  In the opening moments of the film, you are treated to a topless scene from Olivia Munn.

You see, Mike (Channing Tatum) realizes that stripping is just a means to an end; that end being starting his own custom furniture business.  Sure, he has fun with the stripping, but it doesn't define him and he understands that there's a shelf life on doing it.  You can see from his interactions with the other strippers that his motivations are bit different.  Although, it seems that every stripper you talk to is really a student, or just kind of fell into it, but Mike seems to actually have a definite plan to get out.

Mike has money saved up, but is having a hard time getting a business loan. As most of his jobs are cash based, he doesn't exactly have the best credit.  He works multiple jobs, doing consturction during the day, which is how he meets Adam (Alex Pettyfer).  Adam's kind of a screw up and basically quits after his first day on the job.  Mike brings Adam along to one of his shows, but circumstances force Adam into the spotlight and ends up stripping.  Adam has fun with it though, and sees how much money he can make, so he decides to go with it.   His sister, Brooke (Cody Horn), doesn't seem to be too wild about his new employment, or Mike for that matter, but Mike promises to take care of him.

The first half of the movie you spend more time watching these guys dance and party, and it's easy to see why they love what they do.  It looks like a lot fun!  The dance numbers were actually entertaining, even for someone that had no real interest in seeing that initially.  About halfway through, there is a shift, and it starts to focus more on Mike trying to get out of the business, his budding romance with Brooke, and Adam's screw ups.  This is where movie gets a little gritty and you see more of the seedy underbelly of the business.  You may have heard comparisons to Boogie Nights and I'd say that's a pretty close comparison.

I've been really, really hard on Channing Tatum in the past.  I don't have anything against the guy personally, but I've just never thought that much of his acting.  However, between Magic Mike and 21 Jump Street (he was even decent in The Vow), I think it's time take the guy seriously.  He certainly has charm and charisma on screen.  If you've seen the Step Up films, we already know he can dance, but as someone that spent time as a stripper, it's a role he's familiar with.  I'm sure being able to identify with the character so well is what drew him initially to the project, and it it's clear he was able to draw from his own experience.  What can I say, you finally won me over.  Good job!

Steven Soderbergh has always been very good about getting the most out of his cast, even when working with actors not known for their skill.  He continues that trend here, getting great performances out of people like Tatum, Pettyfer and even Olivia Munn.  However, there's always an exception to the rule, and this time it's Cody Horn as Brooke.  She was just a blank slate, possessing no charisma the entire film.  It felt like she was literally reading her lines off a page without any emotional weight.  It's hard to believe why Mike would be interested in her, other than convenience, and it makes it hard to care about that aspect of the film since there's no chemistry.  It's odd because Mike's other main interest in the film is Olivia Munn's character and they seem to have much more chemistry in their short time together.

Matthew McConaughey plays what appears to be the grown up version of his character from Dazed and Confused.  You even hear him say, "All right, all right, all right..." several times in the film.  He's really great though as the sleazy club owner.  He seems to be going through a bit of a career revival recently with stuff like The Lincoln Lawyer and Bernie, but Magic Mike might just be his finest performance yet.

You've also got guys like Matt Bomer, Joe Manganiello and even the WWE's Kevin Nash as part of the crew, but they aren't given much to do other than have a few lines of dialog, dance and take their clothes off.

As you'd expect from Soderberg, there's some really interesting camera work and the movie as a whole is visually appealing. But like in Haywire, the entire film has this yellow tint to it.  His direction otherwise is great though.  He keeps taking chances and doing different types of movies, but even with his weaker ones there's something enjoy to take away from them.  The screenplay by Reid Carolin is smart, with sharp, and sometimes very funny dialog. I applaud them for making something that wasn't just all about sex or titilation, and could have been trashy like Showgirls or Striptease.

My only real complaint about the movie, once again, is the length of it.  This is close to two hours and could have been edited down a bit.  I didn't really mind the shift in tone, but the first half of the film is certainly more fun.  I think either removing the love story between Mike and Brooke, or recasting the role of Brooke with someone more interesting, would have helped.  Their romance dragged the movie down due to the chemistry problems mentioned earlier.

I can't help but wonder if Magic Mike might have sold better to a general audience with a different title.  If you can get past that and are comfortable with the fact that it's still about male strippers, Magic Mike is actually an intelligent and entertaining movie.  If you had bet me a week ago that I would have liked this movie, I would have told you to take a hike, but I was pleasantly surprised.  I don't have any problem recommending this as a matinee.  There's a lot of fun to be had here.