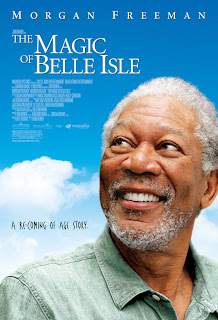 Morgan Freeman stars as Monte Wildhorn, a popular Western novel writer.  However, he's struggling with alcoholism and lost his motivation to write.  He moves to a lakeside house in Belle Isle, next door to Charlotte (Virginia Madsen) and her three daughters.

Monte is a broken man, both physically (he's wheelchair bound), and spiritually.  He seems to oscillate between wanting to be left alone, but not exactly pushing anyone away that interacts with him.  While not completely rude, he's very set in his ways, especially with regards to things like manners.  As you might also guess with someone so old school, Monte's also a Luddite, refusing to use phones and writes on an old typewriter, eschewing use of a computer.  He's so stubborn that he even renames the dog he's house sitting to 'Spot', as his existing name, 'Ringo', was unbefitting of a dog.

Early on, the middle of Charlotte's three daughters, Finnegan (Emma Fuhrmann), makes an arrangement with him to mentor her on writing and imagination.  As Monte schools Finnegan, he also takes an interest in Charlotte, as she's an attractive woman going through a divorce.  Will Monte bond Finnegan and Charlotte and regain his passion for writing?  Will he be cured of his alcoholism?  Oh, the suspense!

While there are some mildly amusing moments, this really isn't a funny movie at all.  I was surprised by this with Reiner directing and co-writing it.  He's also joined by screenwriters Guy Thomas and Andrew Sheinman.  It's not that the script is a mess, the characters are cute, but there's not a lot of substance there.  The screenplay takes no chances and is very predictable.  There's never any doubt as to how things are going to turn out.

While not one of Morgan Freeman's best performances, he's always been one of those actors that's impossible not to like.  He's presence and charisma always comes through.  Even when playing a character that has a hard edge, there's always an underlying sweetness and wisdom that he just can't hide.  You know the icy walls are going to melt and he's going to come around.  Virginia Madsen was fine, as were her daughters, the oldest and youngest played by Madeline Carroll and Nicolette Pierini respectively.  Keenan Thompson and Fred Willard also have small roles.  I thought Emma Fuhrman stood out among the cast with Freeman and her scenes with him were what I enjoyed most.

I really don't have all that much to say about it.  The Magic of Belle Isle is a safe family drama that doesn't do anything new. It's harmless, inoffensive and ultimately forgettable.  This seems like something that could have been made for TV, and that's probably when most of you will end up seeing this, on the Hallmark Channel.  Is there a Hallmark Channel?  I guess it doesn't matter, since I wouldn't watch that channel if it existed.  Save it for cable.