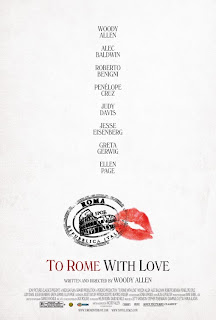 Has it always been a theme in Woody Allen films that regardless of whether or not a character is in a relationship, they'll sleep with pretty much anyone they are currently in the room with?  I've noticed this in some of his recent films and it's been bugging me.  Not everyone sleeps around.  Some people still believe in things like monogamy or being faithful.  Anyway...

To Rome with Love is the latest Woody Allen joint.  Rather than a central story, you get several short stories told in a very choppy style.  At the beginning, it's natural to assume that all these stories will come together at the end, and you'll get some kind of satisfying payoff, but neither happen.  They are completely independent of one another, so the storytelling is very disjointed.  It doesn't help that some are in English and some are subtitled, so you're constantly having to switch how you're viewing the movie.  Also, the stories are of varying levels of quality, so some you have no interest in.  Just when you get invested in one story, it switches to another you don't care about.

One vignette features Roberto Benigni, a man who wakes up one morning and is suddenly famous.  Nobody knows what for, but he is followed everywhere by the media, reporting on every detail of his life.  This could have been a funny commentary about the nature of celebrity, but it's really not fleshed out.  It's played more for a gag than anything.

Penélope Cruz is featured in another as a prostitute, Anna, that meets up with Antonio (Alessandro Tiberi).  It appears to be a case of mistaken identity, as Anna is really intended for someone else, but Antonio goes along with it anyway.  Their entire plot could have been removed, as you don't really care about his character at all.  The resolution to their story is one of the things that bugged me the most with regards to sleeping around.  Antonio finally sleeps with Anna, and then you recall that he's married.  Meanwhile, his wife, Milly (Alessandra Mastronardi), had a short story involving her sleeping with some celebrity, but interrupted in their hotel room by a robber.  However, she ends up just sleeping with the robber.  What the hell!?  Maybe because of all the jumping around with the stories, or maybe this was when I stepped out to use the bathroom, but I don't remember that they established that Antonio and Milly were married, so this was a surprise to me.  Either way, I though their whole story was very clumsy and hard to believe.  I will say that for the short time she had in the movie, Alessandra Mastronardi just lights up the screen.

One of the longer stories is of Jack (Jesse Eisenberg) being met on the street by John (Alec Baldwin).  In one of the more fantastical elements of the film, you realize that John is not actually there and appears to be the older version of Jack visiting his younger self.  As first, you think John just may be a figment of Jack's imagination, as he appears randomly and has conversations that nobody seems to notice, but then other characters interact with John.  So it's very unclear as to what John is.  It's also unclear if he's trying to prevent Jack from making the same mistake or just revisiting a part of his life.  Another thing that took me out story was that if John was, in fact, interacting with the younger version of himself, why didn't they cast an actor that looked the part or acted in any way like him?  It didn't fit at all.

Also, once again, we have a story about cheating.  Jack's in a stable, happy relationship with Sally (Greta Gerwig), but is tempted by a visiting friend, Monica (Ellen Page).  I thought Ellen Page was totally miscast here.  She's supposed to be this sexually open woman that Jack is just drawn to, and her character is described explicitly as being sexy, but that was the last thing I thought of when watching her performance.  While you can be sexy without being a bombshell, Page still looks like a child, and no point did I find her seductive in any way.

Woody Allen seems to have saved the best story for himself.  Allen plays Jerry, a retired music producer that travels to Rome with his wife (Judy Davis) to meet the family of Michelangelo (Flavio Parenti), the man his daughter (Alison Pill) plans on marrying.  He finds that Michelangelo's father (played by real life opera singer, Fabio Armiliato), has an amazing singing voice, but can only sing when in the shower.  This leads to Jerry pushing Michelangelo's father to pursue singing and looks for creative ways to get him on stage.  This story ended up being the most interesting and the only one that felt complete.

After last year's Midnight in Paris, I think many might have heightened expectations going into To Rome with Love, but this doesn't have the same charm or humor of Paris.  Rome has too many undeveloped stories, characters and ideas.  Many of the jokes felt stale.  Despite that Paris is essentially a fantasy movie, its characters and situations felt more realistic than Rome's.

I know it sounds like I hated To Rome with Love, but I actually didn't.  It's the very definition of a mixed bag.  Some of it works, some of it didn't.  It's a bit of a mess, but a watchable one.  It suffers from a lack of focus and too many undeveloped stories.  Rome is a disappointing follow up to Midnight in Paris, but that's a tough act to follow, even for Woody Allen.  Save it for rental.