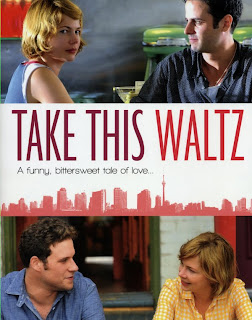 Is a romantic drama about a happily married woman that won't stop flirting with her creepy neighbor actually romantic?

Margot (Michelle Williams) is supposedly a happily married woman.  Her husband, Lou (Seth Rogen), is a cookbook writer that loves her very much.  However, she finds herself torn when she meets an attractive stranger on a trip, and finds he lives across the street from her.  What a funny coincidence, right?

Spoilers ahead, so skip to the end if you plan on seeing this.

Whey they meet, she informs Daniel (Luke Kirby) that she's married, but he continues to flirt with her and seems to be around every time she leaves the house, as if he was stalking her.  Even though Margot tells him she's happily married and doesn't want to her her husband, she never stops flirting and spends large amounts of time with him.

I've often complained when watching romantic dramas that you have to wonder about who is supposed to identify with the characters, their values or behavior.  Margot starts this affair after a chance encounter that really didn't seem all that remarkable, and they've given you no reason to think she's unhappy or reason to dislike her husband.  You know, reasons she might be looking to cheat.  Lou is going along blissfully unaware that his wife is carrying on this affair with her neighbor, and worse yet, he figures it out before she has the stones to tell him.  Daniel even meets Lou a few times, and Lou goes out of his way to be nice to the guy, yet Daniel still carries on.  So Daniel is a creepy, stalker douche bag, and Margot is an emotionally immature 28-year-old, so now you have a movie centered around two people I cannot like in principle and wouldn't want to know.

Daniel is a walking, indie-movie cliche.  He's a hipster artist that drives a rickshaw to make money, while wearing capri pants.  Yes, he's a rickshaw driver.  I guess cost of living must be very cheap where they are based in Canada, or being a rickshaw driver pays very well, because he never seems to have difficulty affording a nice place to live.  At a certain point in the movie, he moves and settles in an impossibly large loft that seemed way beyond his means.  Overall, his character came off as very slimy to me.  I don't know if that's due to Luke Kirby's performance or how the character was written or directed.

Take This Waltz is languidly paced, and overly long at nearly two hours.  A huge pet-peeve of mine in romantic movies are endless music montages where nothing happens, and you get plenty of that here.  It became very tedious to watch the longer it went on.  When a movie is needlessly long and poorly paced, but then you have all of these sequences that could have been removed and still told the same story, it comes off as self-indulgent to me.

There's a surprising amount of nudity in the movie.  I had actually heard about a scene before watching where several women are showering together after an exercise class.  They are all just talking about their lives and shaving their legs.  It's totally non-sexual, and I guess it's meant to show women in a casual, non-flattering, but realistic way.  However, it simply wasn't necessary, and the same dialog could have been done in any situation, like having coffee.  Later in the movie, you have lots of nudity in yet another music montage of Margot and Daniel having all kinds of sex and engaging in threesomes.  Two guys or two girls, it doesn't matter.  Leaving your husband unleashes your inner freak, I guess.  Also, I'm not sure if this was a choice by the director, or the cinematographer has a fetish, but it seemed like there were lots of shots of feet and legs in the movie.

Written and directed by Sarah Polley, much has been made of her first effort, Away From Her.  I haven't seen that, but this feels like it must be a step back.  Judging by all the positive reviews, I guess I'm in the minority on this one, or maybe it's an example of critics wanting to like a movie because they liked their previous work.  While I think Polley demonstrated skill as a director, I think her writing suffered here, particularly with the characters.  There's some funny, natural dialog, and I felt most of the scenes between Margot and Lou felt very real.  However, some of the dialog ends up being unintentionally funny.  Early in the movie there's this really creepy scene where Margot asks Daniel to tell her what he would do to her, and then describes in excruciating detail exactly how he'd have sex with her.  A little later, Margo has an emotional breakdown when Lou is just trying to cook for his book and she comes off like a crazy person.

It has one of these ambiguous endings that's very frustrating after watching almost two hours of this melodrama.  So is she really happy at the end after everything she did?  Are we to believe that she screwed up?  I guess it's left for us to decide.  It's like they were saying, let's make this movie super-indie and fill it with metaphor and you figure it out.

The movie does feature some good performances.  While I didn't really care for Michelle Williams character, I thought her performance was very emotional.  I also liked Seth Rogen playing a character out of his comfort zone.  He came off as very sympathetic to me and was pretty much the only person in the movie I rooted for.  Lastly, I thought Sarah Silverman was great as Geraldine, Lou's alcoholic sister.  She was my favorite thing about the movie and easily had all the best dialog and scenes.  I wish she would have been in it more, but the movie wasn't about her character.

Take This Waltz is one of those indie films that just comes off as too hipsterish and vague for it's own good.  While there are some very real moments and themes here, it's overlong and centers around two characters that you don't like or root for at all.  Other than some good performances by the cast, I can't recommend this to anyone.