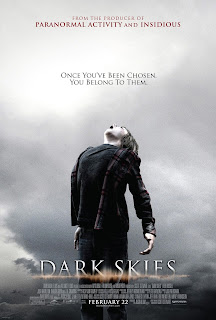 I think this is the alien version of an atomic wedgie...

I really don't have much to say about Dark Skies, so I'll try to keep this short.  I wasn't even sure what kind of 'horror' film this was going to be based on the commercials.  Was this going to be supernatural themed or alien themed?  The opening credits ends that suspense, but when watching Dark Skies, I became convinced that even writer/director Scott Stewart wasn't sure what kind of film he wanted to make.  When you see how the end plays out, I believe that a lot of what was in the film felt like reshoots done after initial test screenings didn't go well. It doesn't help that it borrows heavily from movies like Poltergeist and Close Encounters either.  I get that a horror film these days is going to have a lot of familiar elements, but the problem with Dark Skies is that it doesn't fully commit to either angle, so we're left with a muddled and uninteresting flick.

I thought the film might actually have a chance at first was because of the cast.  I've always liked Keri Russell, but I would think she's at a point in her career where she doesn't need to be in such a generic horror film.  She seemed like she was really trying, too.  Her older son (Dakota Goyo), has kind of a funny arc about trying to get his first kiss and grab a boob, which I felt was one of the better parts of the film.  It made me think I was watching real people for a change.  The entire family felt pretty realistic in the first half of the film.  I really perked up when I saw J.K. Simmons name in the opening credits, because it's rare when he's in something I don't like. Unfortunately, when he finally does show up as 'the alien expert', it's so late in the film that I had actually forgot he was supposed to be in it.  His scenes are pretty disconnected from the rest of the film, as they only occur in his apartment (in an undisclosed location), which further added to the feeling that his entire presence in the film was added as afterthought.

Another reason why I think this wasn't always supposed to be an alien flick is due to the fact that when they are first revealed, the alien has a different look than the ones you see at the end of the film.  There's a good hour in-between their appearances. Also, what's up with aliens always being naked?  When going to another planet, don't you think some kind of uniform or environmental protection might be important?  They've created the advanced technology to travel millions of light years and abduct people and experiment on them without detection, but they've evolved past the point of needing clothes? They don't need pockets?

So, Dark Skies decides to go with aliens, but what do they want?  They just want to bully and screw with you.  First, it's a mess being made in the kitchen (one time was a pretty obvious ripoff of Poltergeist).  Then, all of the pictures in their house are stolen, but they leave the frames behind.  At one point we see a bazillion birds kamikaze into their house, and nobody knows why.  Things escalate to the entire family hearing weird ringing in their ears, bruises and marks show up on their bodies, and they even have black outs, losing hours at a time.  Again, there's not a lot about what's happening that is specific to aliens, versus something supernatural.  Markings do appear that seem to be of alien origin, but when other parents notice them on the kids, people think they are being abused.  That's actually an area of the film that could have been really interesting if they had used that more.  Do something like have Child Protective Services take the kids away, and then the parents struggle to convince others they aren't responsible and prevent their abduction by aliens at the same time.

One thing that's always bugged me about these kinds of films is that regardless of whether it's aliens, demons, or whatever, why are they selecting someone that isn't all that important in the grand scheme of things?  If you're gonna possess or abduct someone, why not chose a world leader or someone like that?  Why is it always a pre-teen or suburban family that's the target?  It's not like these people have any ability to stop what's happening, and would anyone even notice they're missing for a while?  I guess there's something to be said for going after an easy target.  Well, the explanation for this provided by Dark Skies is that there is no reason.  No reason at all.  When the parents finally talk to J.K. Simmons, he tells them that it's just what the aliens do, and they've been doing it this way for a long time.  When they ask why they're being experimented on, they are basically told, "Do doctors explain to lab rats why they do the things they do?  Would you even understand if they did?" So, I came away from Dark Skies thinking the aliens were like a cat playing with a mouse before eating it, or sadistic kids torturing small animals.

The thing is that it still would have been a passable movie if it wasn't so boring.  It honestly felt well over two hours long, and I was shocked to find it was only 95 minutes.  Part of why it's so boring is that Dark Skies is not scary at all.  There are a few cheap jump scares, and even those are telegraphed.  Some of the stuff that happens would have been creepy if the movie wasn't so slowly paced.

Dark Skies is a snoozefest that even fans of horror will have a tough time getting though.  It had potential, but it's lost with its lack of consistent direction and borrowing too heavily from better films.  There's not much I can recommend about it, and advise you to give this one a pass.