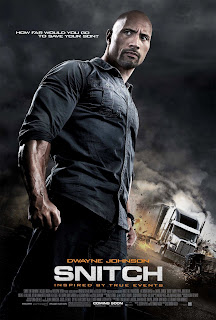 Well, at least it's not another The Tooth Fairy...

Don't worry, Dwayne "The Rock" Johnson's latest movie Snitch isn't some cheesy family movie.  Snitch is actually much closer to what I envisioned for The Rock when he first moved from wrestling to doing movies.  While a little smarter than you might expect, Snitch is far from being a great action film.  In fact, I really can't this a much of an action flick at all.  If you go into this expecting a action packed film filled with car chases and gun play, you're going to be really disappointed.  This is the first of at least four Dwayne Johnson movies coming out this year, so hopefully one of these will hit.  The guy deserves it.

It's another movie based on 'true events', and many of you know how I cringe whenever I see that in the opening credits.  Johnson plays John Matthews, the owner of a construction company.  Matthews' son, Jason (Rafi Gavron), is busted for accepting a box of drugs shipped by his friend.  Unfortunately for Jason, it's a large enough amount that it's considered intent to distribute.  Due to tougher mandatory minimum sentencing, he's going away for 10 years if convicted.  The whole thing is basically a setup to get first time offenders and lower level people to rat out others in up the ladder in exchange for reduced sentencing.  The problem for Jason is that his friend already snitched on him, leaving nobody for him to rat out.  John doesn't want to see his son rot away in prison for what his family believes was just a dumb mistake, so he makes a deal with a local politician (Susan Sarandon) to go undercover and help bring some drug dealers down.

Now, I had to look it up, and I guess you could say the "based on true events" part relates to that there are very strict minimum sentencing laws, even for first time offenders.  The funny thing is that there's actually a scene of The Rock looking this stuff up on Wikipedia.  It's if they're saying, "Don't worry, we actually did our research."  Or maybe they are daring us to look into it ourselves.  I did see that one of the criticisms of the minimum sentencing is that it takes the power away from the judges, not allowing them to issue sentences on a case by case basis.  I thought one of the themes of Snitch was how unfair this all seemed to be.  Jason didn't have any priors, and you can't help but wonder why they throw the book at him, when you can see that he wasn't a drug trafficker.

Sarandon's character (I don't recall her being mentioned by name, but The Rock would say, "It doesn't matter what your name is!") believes in the minimum laws, regardless of the situation.  She sees John's willingness to go undercover as a no risk play for her to get more drug dealers off the street and help her re-election.  Even the law enforcement agent (Barry Pepper) they are working with thinks she may be going too far in risking a citizen's life and family.  You start to wonder who the real bad guy is.  That's where I thought Snitch had a little more going for it than just a simple crime drama.  The issue with the story by Justin Haythe and Ric Roman Waugh (who also directed) was that it only scratches the surface of some of these underlying themes.  The movie could have taken more of a stronger stance or showed more of the behind-the-scenes political motivations, but it's not that deep.

The main problem with Waugh's direction is that he really drags the film out, where if it had gone deeper into some of these themes, you wouldn't have noticed the length as it would have been more compelling overall.  When a movie is this long (almost two hours), you hope there's going to be a good payoff at the end, but that's where Snitch really falls apart.  While the action picks up, it devolves into a big car chase with explosions and cars flipping everywhere.  It doesn't help the Matthews' plan had too many parts with a very small margin for error for it to have possibly worked.  It all ties up a little too neatly.

Plus, and this is one of the same issues I had with Identity Thief, is it normal for law enforcement agents and politicians to sign off on letting private citizens take the law into their own hands or go undercover on their behalf?  You look at John Matthews and he looks like a guy that can handle himself, but that doesn't mean he has the training needed to survive. Aren't they opening themselves up to huge liability if things go wrong?

Another issue I had was the use of too much handheld camera work, even in regular scenes.  There's a simple meeting that happens in the film and the camera just jittery and jumping around all the place for no reason.  I shouldn't get motion sickness watching people talk.

Ever since The Rundown, I've been waiting for Dwayne Johnson to have that hit that puts him up there with the likes of Stallone and Schwarzenegger, but it just hasn't worked out that way yet.  The irony is that he's a better actor than either of them, has just as much charisma, and is infinitely more articulate. I also hear he's a pretty good cook, too.  Johnson stretches a bit out of his comfort zone and gets a chance to show some emotional range here.  It's definitely his most serious work so far. Another thing that stands out about him is, well, how much he stands out.  He really is a beast compared to the average guy. Even when he casually walks around he looks like he can knock down a wall if he's not careful.

The rest of the supporting cast does a good job.  Barry Pepper looks like he's auditioning for a role in Justified, and I think he'd fit in pretty well actually.  Susan Sarandon is always a welcome sight on screen, who automatically adds class and hotness to anything she's in.  Now that Shane is dead on The Walking Dead (spoiler!), Jon Bernthal gets to play an ex-con that introduces The Rock to Omar Little from The Wire (Michael Kenneth Williams).  Bernthal and Williams get a decent amount screen time, but again, it seems like there was more to their characters hinted at by the story, but not delved into enough.

Snitch has a few good things going for it, mainly Dwayne "The Rock" Johnson and a smarter than expected setup, but in the end it's undercut by a plodding pace and tonally inconsistent ending.  It's a shame because there was some potential here for it to be a much better film, and a few tweaks here and there would have made this above average.  Snitch is ultimately a very average, and somewhat forgettable, film that will make for a good rental in a few months.