The Sorcerer and the White Snake (2013) - Movie Review 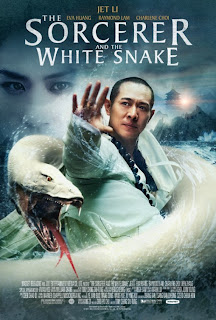 I was really disappointed when I realized this wasn't about the rock bands Sorcerer and Whitesnake.  Two dueling bands fight for supremacy!

If I sound like more of a blithering idiot than usual, check out the plot synopsis I read going into the film:

When an herbalist falls for a dangerous snake disguised as a woman, a sorcerer tries to discover the true identity of the White Snake and take her down.

Have you ever read a blurb about a film and thought, "There's no way the film could be weirder than it's short description?"  The Sorcerer and the White Snake manages this feat.  If you're wondering why in the hell I bothered watching the film based on that, it's because the sorcerer was played by Jet Li.  I figured what the hell, the plot may be weird, but at least I'll be in for some good martial arts action, right? Wrong!

Once again, super spoiler-filled review ahead, but I'm advising you not to watch this, so screw it.

Word to the makers of this film (but not word to your mothers), when your movie starts on a snow covered plain, and your star is wearing white robes, don't also subtitle your film in small white lettering.  We weren't two minutes into the film, and I was already getting eye strain trying to read the subtitles.  Normally I can get used to reading subtitles after a few minutes, but I completely gave up.  They continued with light background colors and really small print for the subtitles.  Not that reading the subtitles would have made the story any easier to understand though.  What's more disturbing about this is was to learn that this was released in China back in 2011, so despite having almost two years, they didn't bother to fix it.  Why not dub it in English?  Jet Li could have even done his own dialog.

This wouldn't have mattered so much if the film brought the action, and we do open with a fight scene.  Unfortunately it was a really awful looking wire-fight, coupled with special effects that looked worse than low-budget TV shows.  I'd like to say this got better as the movie went on, but it didn't.  Most of the effects throughout The Sorcerer and the White Snake looked like really dated video game graphics.  I can understand the budget not being that high, but when it's so bad that it becomes distracting or laughable, then what's the point?  It's not enhancing your story, and instead making it harder to watch.

You might wonder why they didn't just use practical effects, but the few they did use were even worse looking than the CG effects.  Early in the film, Jet Li's underling (Zhang Wen) is bitten by a 'bat-demon', which was basically a vampire, but they never just simply called them vampires, and then turns into one himself.  It looked like a cross between a pointy-eared pig with fangs and what Emil looked like at the end of Robocop after getting covered in toxic waste.  I genuinely laughed out loud every time he appeared.

From what I understood of the story, the silliness wasn't strictly confined to the visuals either.  Jet Li and his assistant are demon hunting monks. I'm not sure why they are hunting them, but they were pretty driven about it, going from town to town and killing or imprisoning all demons they find.  The demons of their world could take all sorts of forms, making them harder to track.  One group they encounter turned into cute, white fox cubs.  You see them and go, "Aw, they're so cute.  They couldn't be that bad could they?"  Well, Jet Li didn't think they were too cute, so into the demon prison they went.

Meanwhile the White Snake (Shengyi Huang) and the Green Snake (Charlene Choi), who are also demons, are just hanging around, and they spot an herbalist (Raymond Lam) collecting herbs.  The Green Snake plays a 'prank' on the herbalist, causing him to fall off a cliff and sink to the bottom of a lake.  Hilarious prank, eh?  That Green Snake is a real cut up. Anyway, the White Snake (again, not the band), saves him by kissing him, transferring some life essence to him.  Now this herbalist has some new essence, and is inspired to invent Herbal Essence shampoo.  That last part might have been a figment of my imagination.

Later, the White Snake can't get the herbalist out of her mind, decides to track him down and hook up with him.  Taking on human form, she goes by the name Susu, and now I have to fight the temptation to call her Sussudio for the rest of the film. Susu catches up with the herbalist, but knocks him into another body of water, where she must save him again.  I could only assume that this herbalist, despite always around water, never bothered learning how to swim since he sinks like a stone anytime he's submerged. They get married, even though I don't recall any ceremony or even proposal.  Since the movie is mercifully only 90 minutes long, I'll let them slide for cutting a few corners.  Susu and the herbalist appear to be happy.

Even though this White Snake's only real crime is to fall in love with a human, Jet Li cannot let this stand.  We haven't even seen her do any harm to anyone, but he's bent on taking her down.  In fact, she gives part of her life essence to help the sick people in the town they live in.  I heard in a deleted scene you even see her reading and doing math: BURN HER!!  The White Snake is more Disney princess than anything.  She even has a talking mouse, rabbit and turtle as friends, and we all know that a trio of cute, talking animals are the axis of evil.

Jet Li and his monks attack her and force her to reveal her true form, but the herbalist doesn't know that she's the White Snake.  Worse yet, Jet Li tricks him into stabbing her with some mystic knife.  At this point it's clear that Jet Li's character is a dick.

The herbalist realizes his wife is the White Snake, but doesn't care, you know, cause true love and stuff.  He finds some magic herb to heal her, but it possesses him, so the monks kidnap him and perform some ritual on him.  White Snake and Green Snake come to rescue him and threaten to flood their city if they don't.   Jet Li refuses and accuses them of being selfish since they are willing to risk so much for just one man.  I think you could argue that maybe it's just as selfish to, I dunno, trick a unsuspecting human to stab his demon wife, and then refuse to release him from captivity when she comes for him.  So now you're risking your entire brotherhood for one man?  That's not selfish behavior?  Ok.

So, they fight it out and both the sorcerer and demon snakes seem to have unlimited powers of bending reality, and can pretty much making anything they want out of nothing.  Speaking of bending reality, as the city is flooded, the monks inside are all fine, just holding their breath forever I guess.  At that moment an army of talking mice swims in to rescue the herbalist.  They collectively yell "Charge!" as they do this...underwater.  Maybe it's special oxygen water or something.


Back on the surface, each attack is effortlessly countered by the other, and at a certain point, you wonder why these guys don't just stop fighting for a second and talk.  All they do is cause mass destruction, and you know there's not going to be a winner. Jet Li ponders at one point during the carnage that maybe he's been too stubborn, and you can't help but answer, "Yes!  You are totally being too stubborn!"  This whole last sequence of the film is just a mess of computer generated madness that looked terrible and you didn't care about anything that was going on.  Then during this climatic battle, there's an attempt at emotional climax, and I almost forgot that there was a love story at the heart of this film, but it's completely lost in a jumble of CG nonsense.

What surprised me about how awful the action was, was that the director Siu-Tung Ching is an experienced director, and worked as the action director on superior martial arts movies like Hero and The House of Flying Daggers.  I'm baffled that he thought using lots of CG was the way to go here, or that he didn't notice that the finished product was a mess.  Even the music used was silly.

The only thing I took from the film is that it's two stars, Shengyi Huang and Charlene Choi, are both extremely attractive.  Not that I could understand what was being said, but it did seem like Huang was emotionally invested in her role.  Jet Li seemed to be phoning it in for the most part, both performance-wise and physically.  He looked bored.

Even if you're a fan of this type of fantasy or wire-fu, there's just nothing worth watching about The Sorceror and the White Snake.  The CG is a mess, the action is uninspired, and the story matches the visuals.  There's no reason to ever watch this.