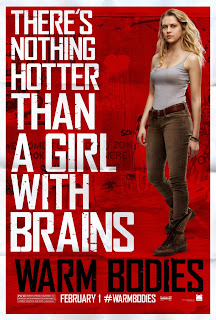 Teresa Palmer could bring me back from the dead, too.  I'm telling you, blonde chicks from Australia are my weakness.

If you've seen the trailer for Warm Bodies, I already know what some of you are thinking, "Oh that's just great!  They Twilight-ified zombies now, too!  What's next? ManBearPig?  The Loch Ness Monster?"  I'll be honest, I also had this concern, and I went in thinking there was a good chance I wasn't going to like this at all.  While Warm Bodies does skew toward that audience, I have to give director Jonathan Levine (50/50) credit.  He managed to balance the humor and young romance elements really well.  Warm Bodies could have been a cheesy, pandering film for tweens, but its humor actually makes it something that works for most audiences.

My concerns went away in the opening moments, when we hear the inner monologue of a zombie (Nicholas Hoult), who has more going on his head than his appearance would indicate.  He's been a zombie so long he remembers nothing of his old life or even how he became a zombie.  He doesn't even remember his name, other than it started with an "R".  This monologue gave the film a Zombieland feel to it, and I was surprised at the humor.  I laughed out loud a few times.

R is conflicted about being a zombie and wished he could communicate or have some kind of connection with someone. When zombies become too far gone and completely give up, they become 'bonies', which are little more than skeletons that will kill anything with a heartbeat.  He does have a best friend "M" (Rob Corddry), but their interaction consists of looks and grunts, but sometimes one of them can manage to say something like "hungry".  While out on a hunt for brains, R sees Julie (Teresa Palmer) and something sparks in him.  Not wanting her to be killed by his fellow zombies, he takes her to safety.  The more time they spend together, the more R regains his humanity.  Eventually, other zombies notice this connection and something triggers in them, as well.

Warm Bodies evolves into what is a surprisingly sweet romantic story.  Yes, the Twilight comparisons are inevitable, but the big difference between the two is that the lack of meaningful dialog is intentional as zombies can't speak all that much.  Plus, there still managed to be way more chemistry between R and Julie despite that lack of dialog.  Nicholas Hoult did a good job of physical acting and saying a lot with his eyes and facial expressions.  It also helps that Teresa Palmer has a lot more charisma about her than Kristen Stewart.  I've always liked Teresa Palmer though, and I don't understand why she hasn't broken out more.  She's been the best thing about several movies I've seen her in like Bedtime Stories, The Sorcerer's Apprentice and I Am Number Four, but for some reason it hasn't translated to bigger films.  I think this might be the one that finally gets her more exposure.

I was surprised to see John Malkovich in this as Julie's father, and he walks that line between wondering if he's evil, or just a protective father in desperate times.  Rob Corddry was great as M, and managed to steal just about every scene he's in despite that you can count the number of words he says on all your fingers and toes.  I think without Corddry for comedy relief the movie wouldn't have been as strong.

I think I might need to cut back on the late night showings for some of these movies, as I was in a bit of a zombie-like mental state to not even realize the Romeo and Juliet angle of Warm Bodies until someone else pointed it out to me.  I was so oblivious to it, that I didn't even notice that the main characters were R and Julie.  I won't go into the parallels too much, since I didn't even make the connection on my own, but there are definitely some familiar elements here.

Warm Bodies isn't perfect.  It definitely has flaws, but they were forgivable.  After a strong opening, it does falter a bit with the tone and pacing.  I'd like to say that Levine's script (based off a book by Isaac Marion), could have used some punch-up, but considering the circumstances, there's not much he could have done without making the zombies start talking a lot, and that wouldn't have worked.  There's some obvious product placement from Corona and BMW, but someone had to help pay for the film.  I enjoyed the soundtrack, but I think it tried too hard to be cute with its choice of music, and some of the songs I think would have worked better had they been used in different parts of the movie.

Another thing you see is that when a zombie eats a brain, they absorb the memories from them.  I actually thought that was a cool aspect, but when you're watching R recount the memories of one of his victims, they were in the third person.  Wouldn't any memory you've absorbed, still be in first person perspective?  When I remember events in my life, I don't actually see myself in them.  At least it gave Dave Franco more screen time.  I know some may get upset with how they treat zombie mythology, but I was never bothered by it, and if you start talking about the 'science of zombies', then I'm gonna have to remind you that zombies aren't real.

I also found it kind of funny that even though R is a zombie, with all the scars and grime, he's still looks like a frigging model.  I can see why this movie could be an ultimate fantasy for women.  You've got a model-looking boyfriend that doesn't speak much, hangs on your every word, protects and does all of these sweet things for you.  Pretty good deal, right ladies?

These are all mainly nitpicks, but  I still can't help but think the film missed a few opportunities to really be great.  It didn't ruin my overall enjoyment of the film.

Warm Bodies isn't perfect, but it's a sweet romantic story with a likable cast.  It doesn't quite cash in on its premise, but there are enough clever and funny moments to still make this stand out in the zombie genre and I found it very entertaining.  I recommend checking it out.