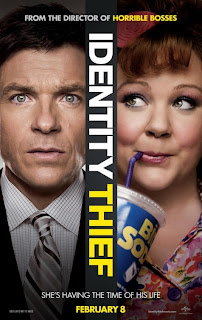 The real thievery is the money the filmmakers try to take from your wallet.

As someone that's had his identity stolen at least three times and used for some kind of credit card fraud (that's not an exaggeration), I can tell you that it's certainly no fun to deal with.  I've been fortunate that every time it's been something I've been able to clear up with a few phone calls, and I've never once had to involve the authorities.  You'd be surprised at how much the stores, banks and credit card companies will take care of for you. Granted, I didn't have the same extremes and nightmare stories that some of you have heard about, or like what the 'fake' Sandy Bigelow Patterson (Melissa McCarthy) does here in Identity Thief.

Lots of spoilers ahead, but it's hard to spoil a film that's so predictable.

We aren't just talking about some fake credit cards and running up some charges either. She's getting arrested and making large purchases (like cars), too.  Meanwhile the real Sandy Patterson (Jason Bateman), is a hard working accountant, with a wife (Amanda Peet), two cute kids (real-life sisters Mary-Charles and Maggie Elizabeth Jones), and a baby on the way.  He has a horrible boss (Jon Favreau), but gets some good news when a co-worker (John Cho) offers him a fat new job at a new company he's starting.  The good news is short-lived though, as the Denver authorities (led by Morris Chestnut) inform him that he's under investigation for fraud and skipping out on court dates in Florida.

Identity Thief already takes a bad turn at this point with this contrived, implausible setup.  Even though they pull the mug shot, and see that it's clearly not him that's committed these crimes, he's still under investigation.  Also, for some reason, his boss says he has to fire him unless he can clear up the charges.  Again, remember it's clear to everyone at this point that the 'real' Sandy Patterson is not the one that did these things.  'Real' Sandy is aware of 'fake' Sandy's whereabouts, but the Denver police say there's nothing they can do, which is absolutely not true in reality.  They also say they can't even call the Winter Park, Florida authorities to pick her up (also totally not true).  Huh?  So, 'real' Sandy says he'll fly down to Florida, pick up the 'fake' Sandy and bring her back to Denver.  The cops actually agree this is a good idea.  What?  Yes, send an accountant to act as a bounty hunter.  Makes perfect sense, right?

What's funny about the how the little the police are able to do here, is that later in the film, the Sandy's are forced to steal another person's identity (but it's okay because it's an asshole, one-percenter, so he deserves it), as part of their bonding adventures. Yet, just a few hours later the St. Louis police are arresting them for fraud.  So, the Denver and Winter Park police can't do anything despite multiple offenses, but the St. Louis police are on them after just one?  Is Identity Thief saying that the St. Louis police are just that much better, or were they so quick to respond because this time the stole from a one-percenter? Wait a second, I'm giving the film way too much credit for trying to say something.

A lot of times I talk about shutting off your brain and just enjoying a film, but Identity Thief is the type of film where the filmmakers have to assume your brain is already shut off to accept anything that happens.  The movie contradicts itself all over the place, and people don't react to things like normal people do.  This wouldn't have been so bad if the movie had actually been funny.  I was surprised at how few laughs there were.  If you've seen the trailer, then you've already seen every funny scene in the film, and they play out even less funny in the film.  If you've seen the trailer twice, then you've now laughed more times than you will when actually watching Identity Thief.  The humor is mean-spirited, one-note (how many times can you make the joke that Sandy is a 'girls name'), and much of it felt like bad improv.

One of the biggest fails of the movie is that they actually try to make Melissa McCarthy's character a likable person.  There's even a makeover scene where she walks into the room in slow motion and Jason Bateman is like, "Wow!"  Then, they make 'real' Sandy conflicted as to whether or not to still turn her in, and says she's not a bad person.  Sandy, can I talk to you for a second?  I can safely tell you that she is a terrible person.  She's a violent sociopath that ruins people's lives.  Are you already forgetting that her ruining of your life is why you're on this ridiculous adventure in the first place or that she's physically attacked you multiple times?  You've only been with her a few days, so you couldn't have possibly bonded that much.  Even taking the bonding out of the equation, do you really think she's reformed and truly remorseful after a just few days when she's clearly a career criminal with no conscience up to this point?

Did I mention yet that Identity Thief is almost two hours?  The length really hammers home how few genuine laughs there are. It could have easily been edited down to 90 minutes without difficulty due to all of the extraneous characters and subplots that didn't add anything to the story.  For example, you've got a duo of lousy hitmen (Genesis Rodriguez and T.I.) after 'fake' Sandy because of some fake credit cards she sold to a mobster, and now he's in jail.  It's interesting to note that this mobster is in jail because of her fake credit cards, but they can't seem to track down the 'elusive' Sandy for the same thing.  Plus, now her list of offences includes selling fake credit cards to the mob.  Then, there's a bounty hunter (Robert Patrick) after her that's portrayed as a bad guy, but he really isn't considering who he's after.  There's also a silly detour involving Sandy hooking up with a cowboy (Eric Stonestreet).  It's all supposed to add to the hi-jinx, but it just drags the movie down.  It's sad because I like the supporting cast, but removing all these extra characters and subplots might have actually helped you buy into 'fake' Sandy's redemption and their bonding on this road trip.

Speaking of liking the cast.  I've always liked Jason Bateman, but once again he plays the same, ineffectual character that lets people walk over him and can't get shit done.  As the movie went on, I actually started to dislike his character more and more.  I just couldn't buy into the fact that he started to sympathize with her in any way.  While this felt like a vehicle for Melissa McCarthy to show off her comedy chops, I don't think she did herself any favors here either.  However, I do think both of these two will come out of this relatively unscathed since we all like them.  It's not even an issue with either of their performances, it's more that they wasted two talented people with a terrible script and poorly written characters.  Also, because I like Bateman and McCarthy so much, I kept trying to give the film a pass.  Then I thought, what if this film starred Katherine Heigl and Gerard Butler?  Would I be so forgiving then?

There's nothing original about Craig Mazin's screenplay, and the story itself is extremely predicable. The lack of originality and meanness of the script isn't a surprise since Mazin co-wrote on films like The Hangover Part II (which was basically the same story The Hangover with small substitutions), Scary Movie 3 and 4 and Superhero Movie.  So much is recycled that they use the same M.I.A. song twice in the movie. That same song that also appears in the trailer for the other Melissa McCarthy movie with Sandra Bullock coming out this summer (and that looks just as bad as this).  Anyway, I'm more surprised that Identity Thief was directed by Seth Gordon, who directed the much funnier Horrible Bosses, as well as several episodes of funny shows like Modern Family, The Office, Community and Parks and Recreation.  I don't understand how he didn't see that the comedy in this didn't measure up to other work he's done and how much of the story was so unnecessary.  He couldn't have brought in some of the Horrible Bosses writers to punch up the script or something?

It's early in the year, but Identity Thief has a lock on one of the worst films of 2013.  It wastes a talented cast with an implausible setup, predictable story, and lame, recycled humor.  It's dull and a real chore to watch, and I found myself growing angry with it the longer it dragged on.  I advise you to pass on Identity Thief, but I know that based on people involved some of you still want to see this.  If you really can't resist, please save it for rental.