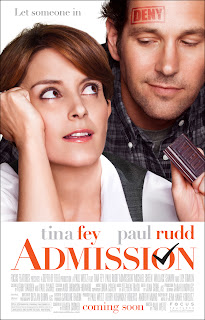 Just for the record, Princeton was my safety school, but I chose to go the Jedi Academy instead...

Tina Fey stars as Portia Nathan, a Princeton admissions officer.  As you'd guess, getting in is pretty competitive, and there's even competition between other admissions officers.  Portia's boss (Wallace Shawn) is stepping down soon, and she and her rival (Gloria Reuben) are the top candidates to replace him.  There's a subplot in there about Princeton's ranking dropping and it's implied that whomever does a better job will take over, but it's really not a main thread of the film.

Portia goes on a recruiting trip to an alternative high school ran by John Pressman (Paul Rudd).  He introduces her to a gifted student, Jeremiah (Nat Wolff), but the twist is that John reveals that Jeremiah might be the baby Portia gave up for adoption back in college.  Portia takes an interest in Jeremiah and tries to help him through the process. In another 'surprise' twist, Portia and John start to fall for each other.

If this doesn't sound like the setup to a hilarious comedy, well, that's because it isn't. Admission is another example of a movie where the trailer really lies to you about the type of movie you're going to see.  If this had been billed as more of a straight up drama, or even a dramedy, then perhaps it wouldn't have been such a disappointment.  The disappointment is compounded by the fact that the comedic elements are sparse to begin with and really uneven.  It ranges from subtle to very broad and silly in parts. It's interesting to note that the dramatic elements of the film were the more interesting parts that worked.  Jeremiah comes off as a bright and earnest kid, which is a credit to Nat Wolff's performance, and Portia's struggle with her own relationships and whether or not to reveal her relation to Jeremiah seemed genuine.

There is good chemistry between Paul Rudd and Tina Fey, but again, it's a shame to get such likable comedic actors and not really give them much to work with.  I think it would have helped to let Rudd improv a little more, and Fey should have taken a pass at the script to punch it up a little.  I think their pairing is the only thing that keeps you watching the movie though.

The script by Karen Croner is based off the book of the same name by Jean Hanff Korelitz.  Another strength of the story were the elements that detailed the arduous admission process.  The film could have been a bigger indictment of the process, but it never quite goes there.  Overall, Admission had a little too much going on, and would have been better to pick a consistent direction.  It's close to two hours, which was excessive and could have used some tightening up.  For example, there's another plot involving John's and his adoptive son (Travaris Spears), that I'm sure they thought added depth to John's character, but it really just added to the number of threads that needed to be trimmed.

Another element that seemed out of place was the inclusion of Portia's mom, played by Lily Tomlin.  Initially, her character was funny, but got sillier the more she was used.  There was also a weird gag involving Portia's ex (Michael Sheen), that wasn't funny in the first place, but then they ran it into the ground.  Then again, I shouldn't be surprised at the inclusion of silly, unnecessary comedy from the guy that directed Little Fockers.  Director Paul Weitz started off great with films like the first American Pie (although it doesn't hold up all that well if you watch it now) and About a Boy, but there seems to be a steady decline since then.  Admission isn't the worst film he's directed, but he really needed to make some stronger choices with the story, or brought someone in (you've already got Tina Fey) to punch up the script.

Admission isn't a terrible movie, but it's hard not to look at it as a missed opportunity.  They brought together Paul Rudd and Tina Fey, but had them work off a really inconsistent script that just couldn't settle on a tone.  As a drama, it's not the worst thing out there, but if you're looking for a good romantic comedy, then you're going to be disappointed.  Stick to rental on this one.