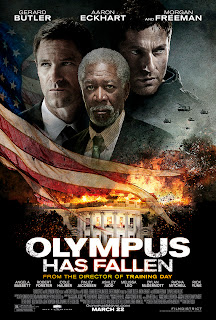 You can rest assured that Gerard Butler at no point in the film yells, "This! Is! Olympus!", before kicking the bad man into a bottomless pit.

I wan't really looking forward to seeing Olympus Has Fallen, despite being directed by Antoine Fuqua (Training Day).  The trailer had that really bad action movie look about it, and it stars the box-office-poison that is Gerard Butler.  I don't mean to be hard on Butler, as I actually like him, but I think we can all agree after watching Olympus Has Fallen he just needs to turn down any romantic comedy he's offered from now on.

Butler plays former Army Ranger Mike Banning, who is now a Secret Service Agent leading President Asher's (Aaron Eckhart) detail.  When leaving Camp David on a snowy night, an accident happens and Banning is only able to save the President and the First Lady (Ashley Judd) is lost in the process.

We fast forward 18 months later and Banning is working at the Treasury.  One thing I liked about the story is that Banning is not disgraced, or has been drummed out of the Secret Service.  He's actively looking to get back into the Service, but the President took Banning off his detail, as seeing him is a reminder of his what happened to his wife.  I appreciated the fact the movie didn't go with the cliche of Banning being unable to be an agent or was too haunted by his 'failure' to perform anymore.  He's not a broken man.

During a meeting between the President and South Korean Prime Minister, a Korean force attacks the White House and is able to take the two of them, along with several other government officials, as hostages in the White House bunker.  I don't think it's unreasonable to wonder how realistic it is that a small force would be able to take the White House in just a few minutes.  I don't know enough about the military or police response or what kind of counter-measures are in place to stop something like this, so I can't get into that.  The Korean force did seem pretty organized as far as their plan, so I just went with it.  It's probably best that you don't think about it too much.  In a lot of ways, this part of the film was more like a disaster porn where we see the White House get blown all to hell and the Washington Monument crumble.  It's was an entertaining sequence though, so I'll give it that.

During the firefight, Banning, who was just down the street, is able to get in the White House where he attempts to take out bad guys and provide intel to the acting President (Morgan Freeman.  President again, eh?) and the remaining staff.  Before I get too far ahead of myself, there's some huge star power at work here.  Besides Freeman, you have Angela Bassett, Robert Forster, Melissa Leo.  That's some top-tier talent in the supporting roles.  I think it helps sell the film though, as nobody seems miscast.

Anyway, as Olympus goes on, you'll get a distinct "Die Hard in the White House" feeling about it.  It's the first thing my friend commented about as the credits rolled.  There's even a scene where Banning pulls shrapnel out of his body while talking to someone on the phone.  The good news is that this is much better than the last Die Hard film.  Olympus is the first feature from the writing team of Creighton Rothenberger and Katrin Benedikt, and it's not super creative or even all that original, but what it is though is no nonsense.  I mentioned earlier that I appreciated that they didn't go with typical cliches regarding Banning, and they did a good job of avoiding it across the board.  Throughout the film I kept waiting for a traitor to be revealed at a high level of government, because that always seems to happen, but thankfully they didn't do that.  There's also a subplot involving getting the President's son (Finley Jacobsen) out of the White House that could have gone a different way, but they were smart not to waste too much time with it.  Once the bad guy reveals he knows who Banning's wife is (a nurse played by Radha Mitchell), I kept waiting for some subplot where she somehow gets kidnapped, but that didn't happen either.  I'm glad they didn't use any of these overused plot devices.  It was refreshing.

Antoine Fuqua, who has a mixed track record as far as I'm concerned (Training Day was 12 years ago, I think it's time to move on), did a good job keeping the tension consistent throughout its two-hour run time, and gave us some good, entertaining action scenes.  Another thing I really appreciated is that the film doesn't shy away at all from the violence.  Banning is ruthless and brutal as he knows what's at stake.  They didn't go out of their way to make Banning a 'good guy'.  I said that the movie didn't mess around, and neither did Banning.  Imagine if Jack Bauer was a Secret Service agent, and that's what Mike Banning is.

I mentioned the star power earlier, and it wasn't just confined the actors mentioned previously.  I liked Aaron Eckhart, and based on his performance, it didn't seem like a stretch to see him as the President.  Cole Hauser was a welcome sight as a Secret Service agent, as well as Dylan McDermott, not to be confused with Dermot Mulroney (watch this link).  It's funny because I just watched a movie with Dermot Mulroney in it yesterday.  If there was any weakness in the cast, I thought it was with the main villain, played by Rick Yune.  I think it's mainly just that his character wasn't written all that well.  The star of the film really is Gerard Butler, and it's clear he needs to stick with action films.  Even though sometimes his native accent bleeds though, I never really had a hard time believing him in the role, and he showed he still has a physical presence to carry an action film.  He even got to have a few snarky one-liners, and it seemed like he had a lot of fun.

Another quick note I wanted to make was that I got to see this in Regal Cinemas' RPX format, which just debuted at my local theater this week.  It's kind of like IMAX-lite.  You have to pay a few bucks more for the ticket, but you get a larger screen and high-powered sound system that works well for a loud action film.  The best part though are the upgraded, bucket seats.  I believe they were leather, have a full sized headrest, and rock significantly.  They are extremely comfortable to sit in, and I thought the experience was worth it.  I wouldn't hesitate to see another movie in RPX.  Plus, with all the new seats and fresh construction, there was a very 'new car' scent in the theater.

Olympus Has Fallen isn't a particularly smart movie, and covers a lot of familiar territory, but as far as a tense action film goes, it's not all that bad.  I surprised by how entertaining it was, and had more fun with it than I expected.  If you're an action fan, and you want to something to tide you over until the Summer action films start rolling out, then you could do a lot worse.  It's a decent matinee.