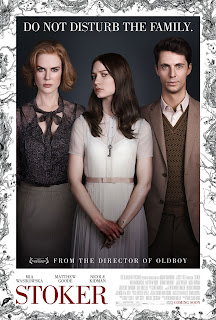 Kidding aside, I had been looking forward to watching Stoker for quite some time, as it was directed by Park Chan-wook (or is it Chan-wook Park?), who many of you may know as the director of Oldboy.  There was a good amount of hype surrounding the film, and I'm glad to say that I wasn't disappointed.

From the opening moments, you can tell that India Stoker (Mia Wasikowska) is bit of an odd bird.  She doesn't have any friends, and her hobbies vary from piano playing to hunting small animals, which is already kind of a red flag.  She would normally hunt under the supervision of her father (Dermot Mulroney) though, but then that just made me think India is a female version of Dexter.  She also doesn't seem to like any kind of physical contact, and doesn't have much of a relationship with her mother (Nicole Kidman), which you know is going to come into play when we learn that her father has died on her 18th birthday.

At the funeral, India's uncle Charlie (Matthew Goode), who's been travelling the world, returns home and moves in to help out. We also learn that Charlie has been sending India a pair of saddle shoes every year for her birthday, but India never actually knew Charlie existed until he showed up.  India remains distant from both her mother and Charlie, but Charlie continues to try befriend her.  Something definitely seems a little off about Charlie, too.  Something is off about everything and everyone in Stoker.

I'd have to say that Stoker is a movie that's definitely not for everyone, as it's a real slow burn for a thriller.  If you like a dark, psychological thrillers though, then Stoker should be right up your alley.  Throughout the film I was reminded of the same eerie feeling I got when watching Take Shelter (totally underrated movie that you should go rent right now).  The score also reminded me so much of Take Shelter that I had to look up and see if they were done by the same person (nope).

One of the things that makes Stoker such an effective thriller is that there's a good use of red herrings that kept me guessing where the film was really going.  You're always wondering what the real motivations of the characters are or if what you're seeing is really happening.  I started to outsmart myself with some of the various reveals, so I did spend the majority of the film wondering what the hell was going on, but that's a good thing.  When everything is finally revealed, it was very satisfying.

Stoker does take a bit of time to get going, but another aspect of the film that works is that there are a lot of great, interesting camera shots that make the film that much more mesmerizing.  I'm usually not one to notice things like cinematography unless is really stands out, but there are some really great camera angles and transitions used throughout the film.  Like at one point Nicole Kidman is having her hair brushed, and you get a real tight closeup where you see every strand of hair, but then the camera begins to pan down and the hair slowly turns into long strands of dried out grass in a field.  Park Chan-wook and cinematographer Chung-hoon Chung (who also worked on Oldboy), created a great look for the film, and it's the kind of work where you're want to go back and watch other films they've worked on together.  If you haven't seen Oldboy yet, I do recommend checking it out.

Another thing that really surprised me about Stoker is that this was written by Wentworth Miller, of Prison Break fame.  I was really never a big fan of that show, but I think he wrote a really interesting thriller here, and I hope he keeps at it.

Lastly, sometimes a movie works only as well as the cast can carry it, and that's another strength of the film.  Nicole Kidman has that perfect icy demeanor that is spot on for her role.  Matthew Goode has a great, creepy duality about his performance that just sells his character so well, and you never quite know what's really happening with him.  Mia Wasikowska is simply fantastic as India Stoker.  She's been on my 'one to watch' list for a while and this just cements her place there.  Her performance is one where you just can't take your eyes off her and you're always wondering what's going on in her head.

Stoker is an eerie, layered mystery that's powered by the aesthetic and direction of Park Chan-wook, and further strengthened by the great cast and performances.  This is one of those haunting thrillers that'll stick with you, and I highly recommend checking it out.  It's in limited release, so many of you will have to save it for rental, but if it's playing in your area, then it's definitely worth the trip.