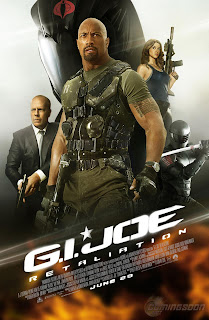 All right, kids.  Remember to drink your teeth, stay in drugs, and don't do milk! Knowing is half the battle...

It's kind of hard to take a movie seriously based on a series of toys and cartoons, let alone an unnecessary sequel to one.  G.I. Joe: Retaliation is not a movie set in our universe, but an alternate one where a regular military doesn't exist, ninjas wear white and bright red, and everyone speaks in bad puns.

This review is going to be spoiler-filled, so be warned...

Some of you may remember that G.I. Joe: Retaliation was originally scheduled to come out back in June, but just a few weeks before its release, it was announced it was being pushed back to March.  The reason given was that they were going to do a 3D conversion.  I've heard many rumors that the real reasons varied from the studio understanding it wouldn't make as much money competing against the bigger, summer films, where it would do better in March (a much weaker month for action movies).  One of the more popular rumors I heard was that due to Channing Tatum's increased popularity, they wanted to go back and shoot more scenes with him to capitalize on his stardom.  I'm guessing there some truth behind all of this based on what I saw on screen.

As far as converted 3D goes, it actually wasn't that bad.  Maybe they are finally starting to get the hang of post-3D conversion. I did see this in RPX again, so that may have had something to do with the quality.  Also, there were a few scenes with Dwayne "The Rock" Johnson and Tatum that felt like they were shot way after the fact.  Their scenes together, while trying to establish their friendship, seemed tonally opposite from the rest of the film and really out of place. These scenes also managed to not have any of the rest of the cast in them, which further reinforced my belief that they were pickup shots done recently to have more Tatum in the film.

While I've lightened up on Tatum, these scenes really did show me how miscast he was.  I just couldn't buy him as someone that had military training, and he still has problems with enunciating.  On the other hand, I came away from their scenes (and the rest of the film) thinking that Dwayne Johnson really needs another action film that is worthy of his charisma and physical abilities.  He truly deserves a vehicle to showcase him in an action film that puts him up there with the all-time action stars. Don't get me wrong, Johnson is the real star of Retaliation, but it wasn't made strictly with him in mind.

The good thing I will say about Retaliation is that it's definitely action packed.  I was never bored, and there are some great sequences.  The action is a bit of a mixed bag though, as there are lots of scenes that seemed to suffer from Micheal Bay-ism where you just couldn't tell what was going on or where anyone was at any point in the scene.  There were some fights that had too much of that damn handheld, shaky camera work, coupled with quick cuts.  I can't believe this is a trend that continues, when I don't know anyone that likes films that use this.

The bad part of Retaliation is just about everything else related to the plot.  The whole story was laughable to the point where I actually did laugh out loud several times at how stupid some of it was.  The movie has a ton of exposition, starting with introducing you to the characters in about the most ham-fisted way you could do it during the opening credits.  It was like how an old, 80's TV show (like the A-Team) would introduce characters.  Like I said before, G.I. Joe is set in it's own universe, but they aren't even consistent with it throughout the film, let alone the previous one.  They didn't even bother to mention what happened to all the other Joe's from the first film. Did they all die? Are they retired?  At least they had the good sense to get rid of that stupid power armor, and Snake Eyes (Ray Park) doesn't have a mouth anymore.  Retaliation burns through nearly every action movie cliche there is. It's as if writers Rhett Reese and Paul Wernick were playing Mad Libs for action movies, or pulling random plot threads out of a hat.

The main plot is that it's revealed early on that Zartan, the master of disguise, has taken the President's (Jonathan Pryce) identity.  I thought it was funny that he was only referred to as "President" in the credits.  They didn't bother to even give the President a name.  Anyway, Zartan, acting as the President, launches some crazy plan to kill the Joe's off and frame them as villains while freeing Cobra Commander from some totally over-the-top elaborate prison that only housed only him and Destro. I guess maximum security wasn't maximum enough for two people with no discernible super powers.  It's not like they had Magneto and Darth Vader locked up.  They break Cobra Commander out, and for some reason decide to totally abandon Destro, with absolutely no explanation as to why.  This will likely disappoint G.I. Joe fans, as Destro's kind of an important part of Cobra, and they decide to just completely blow off his character.

Only Roadblock (who wants a body massage?), Flint (D.J. Cotrona), and Lady Jaye (Adrianne Palicki) survive the attack, and it's up to them to figure out what's going on.  This part was kind of hilarious as they have puzzled together that someone must be impersonating the President, but do not just leap to the conclusion that Zartan is likely the person behind it.  They go to great lengths to prove it's Zartan, and act surprised when they confirm it.  It's as if they completely forgot about his existence, despite their previous encounters with him.  Do the Joe's not keep a database of bad guys and people they've fought against, or are they all just going from their shitty, collective memories?

But then, we transition to completely different film, where the RZA plays a ridiculous, martial-arts character, and I guess he was somehow Snake Eyes' master, or something.  Snake Eyes is training Storm Shadow's (Byung-hun Lee) sister, Jinx (Elodie Yung).  It's interesting to note that she speaks with a vaguely European accent despite that her brother is Korean.  I guess they had different parents and grew up in different parts of the world?  The two of them track down Storm Shadow (who only wears white, the most advantageous color for a ninja), and then there's some subplot about Storm Shadow's true origin.

The remaining Joe's enlist the aid of General Joe Colton (Bruce Willis), who's the original G.I. Joe, and then they all hatch some undefined plan to rescue the President and stop Cobra, who's true plan isn't really revealed until like the final 20 minutes of the film.  Their plan didn't make sense to me at all, but it involved several satellites (that Cobra somehow got into orbit without anyone noticing) that fire some rod that somehow does more damage than a regular nuke because it's 'dropped'.  Hey, I didn't write this crap.

This is a big spoiler, but it all climaxes with one of the most ridiculously hilarious endings I've seen in a while.  They actually went with the whole "hit the abort button just as the countdown reaches zero" trope.  Only when the abort button is hit, it magically causes all of the satellites to simultaneously explode.  Cobra designed these satellites with an abort function that also destroys the satellite?  Do they also drive specially designed cars that blow up when they kill the ignition?

I can't believe that director Jon M. Chu didn't stop at any point while making this film and questioned whether or not it made any sense.  Based on all the different plot threads and inconsistencies with tone, I don't think Chu could even settle on the kind of movie he was trying to me.  Were there any attempts to bring in a script doctor to fix some of the glaring plot holes and horrible dialog?  Look, I know it's a movie based off a toy, but that doesn't mean it can't have a plot that is consistent or has some kind of logic behind it.  I can forgive a certain amount of stupidity in my action films, but only up to a point.

Outside of Tatum and RZA (who was really, really miscast), I actually didn't mind the rest of the cast.  Bruce Willis appeared to be phoning it in again, but he's really not in it that much, so whatever.  I thought Adrianne Palicki was actually a bright spot, and I think the fact that she's a taller actress worked for her here.  I thought Ray Stevenson as Firefly was having a good time. He's another actor I wish would get more roles worthy of his talent.  Walton Goggins has a small role in this for some reason, and he clearly deserves better.  There's even a cameo from James Carville.

While G.I. Joe: Retaliation has some loud, fun action, and further proves that Dwayne Johnson needs to be a bigger action star, it's simply a really, really dumb film.  There's a small part of me that still enjoyed it, but I can only hope I've lowered your expectations enough so that if you do go see it, you'll benefit from that.  This is a rental, and now you know...