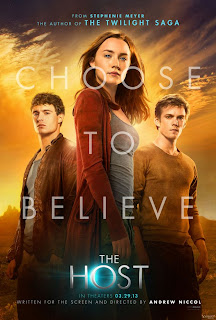 One day, when The Host reaches TV audiences, I think the Tivo synopsis might read something like this:  An alien struggles with schizophrenia while humans say, "I love you", a lot.

It's no secret to anyone that I was not a fan of any of the Twilight series.  When I saw that Stephanie Meyer had another movie coming out based around aliens, I was really, really not interested in seeing it.  But then I saw that Andrew Niccol (Gattica) was writing and directing, and I thought maybe The Host had a chance after all.  Boy, was I wrong!

I don't know how much of the terribleness of The Host was due to Stephanie Meyer's source material, or Andrew Niccol's decisions as a writer/director.  What happened to this guy?  Ten years ago, I thought he was on his way to being one of the better Sci-Fi directors of our time, but he's been in steady decline since then.  His last film, In Time, at least had a decent idea and an interesting enough universe, but was undermined by uneven characters and performances.  Contrast that with The Host, which is dead on arrival.

The Host doesn't spend a lot of time explaining its universe, which basically comes down to that the world was invaded by these glowing, parasitic aliens called Souls.  A Soul takes a human host and possesses their mind, erasing all traces or their consciousness.  Once you are possessed, your eyes glow a bluish-silver, making your easily identifiable.  The stated goal of these aliens is to go from planet to planet to improve it.  They also claim to be peaceful and against taking life, but I guess this doesn't extend to destroying the minds of the hosts they inhabit, eh?  Anyway, you see that a Soul has to be surgically implanted in the back of a hosts neck.  If that's the case, then how did the first person get taken oven then?  How did any of this happen without anyone not noticing or fighting back?  Aren't these pretty giant plot holes?

Occasionally, the host's consciousness fights back, which is what happens when Melanie (Saoirse Ronan) is implanted with a Soul that goes by "Wanderer".  This eventually gets shorted to "Wanda" (ugh, I know).  We also learn there are pockets of human resistance, but are later told the aliens outnumber the humans by one million-to-one.  Lets just take a step back and say there were only a few human casualties during this invasion.  Wouldn't that mean there are only about six or seven thousand humans left on Earth?  Why are the Souls worried about any kind of resistance at this point?.  One Soul even says to just let them die out.

Anyway, one of the head Souls, known only as The Seeker (Diane Kruger), wants Wanda to access the memories of Melanie and find where her group of human resistance is.  Melanie fights her, and this begins the hilariously bad dialog, where you have Melanie as a voice in her head, arguing with Wanda as she speaks aloud.  Even this isn't consistent, as there are times where Wanda just whispers when people are around, and other times when both Melanie and Wanda have a argument in their head.  It gets extremely confusing to follow at times, and you don't know who's voice you're hearing.  Even when she speaks aloud, there are times where you aren't sure if Melanie has managed to 'break through', or if it's just Wanda. I really simple fix to this would have been to play up on the fact that Melanie was from Lousiana. Melanie's accent would drop in and out throughout the film (something that should have been fixed anyway, considering she only spoke in voiceover), but if maybe they had focused on giving Melanie a stronger southern accent, and Wanda a standard, American accent, then you'd more easily be able to identify who was speaking.

Melanie is able to convince Wanda to find her group without alerting the rest of the Souls.  Melanie is desperate to get back to her younger brother Jamie (Chandler Canterbury), and her boyfriend Jared (Max Irons).  However, when Jared sees Wanda/Melanie, his immediate response is to punch her.  Yep, he walks right up an hits her.  I know he recognizes she's been taken over, but you'd think if he was in love with Melanie, his first instinct when seeing her, infected or not, wouldn't be to attack her.  Then, there are several attempts at her life by others in their group.  Melanie tells Wanda that she shouldn't tell anyone that Melanie is still 'alive' inside Wanda's head, because they'll think she's trying to deceive them to stay alive.  Then Melanie says, "They're going to kill us."  Huh?  Doesn't that completely contradict what you just said?  If they're going to kill you anyway, why would you hide the one detail that might be the reason they keep you alive?  Does this make any sense at all?

Wanda starts to fall in love with Ian (Jake Abel), but Melanie is still in love with Jared.  I wouldn't think an alien would necessarily have a concept of human love, but whatever.  This leads to more unintentionally hilarious dialog where Melanie and Wanda argue over who should they should be kissing.  At one point Wanda asks Jared to kiss her in a way that she'll want to slap him (just go with it, okay), and he just kisses her a little differently.  I thought, why don't you just grab her boobs?  I usually get slapped when I do that.

The universe Stephanie Meyer has created isn't consistent at all.  The Souls say all they want to do is improve the planets they visit, which basically means make everything chrome or mirrored.  You see fancy sports cars, that based on engine noise, are still clearly combustion engines.  Was anyone involved in the movie aware of the fact that electric cars make very little noise?  Plus, why aren't all of the vehicles chrome?  You see plenty of people still driving around in older cars, and referring to having a full tank, so I guess these aliens haven't mastered alternative fuel sources or transportation.  Then you see a large superstore where the Souls get all of their supplies, and the store has a giant sign that simply says "STORE" on it.  Are the Souls giant morons or something?

There are plot threads that are introduced, but later dropped that would have been so much more interesting if they had been explored.  Melanie begins the movie throwing herself out of a window and landing several stories below, leaving a dent in the concrete.  They say she didn't break any bones or hurt any vital organs.  The Seeker explains it off by saying, "This one wants to live."  I wish the laws of physics worked like that.  You hope that maybe she's some kind of superhuman, but this is never mentioned again.  You also see that The Seeker may have some internal conflict of her own, but it's also dropped as quickly as it's introduced.  It's a waste to cast someone like Diane Kruger as The Seeker and then make her act like a robot.

This is what bugs me about Stephanie Meyer.  It's just lazy world building where she borrows heavily from other sci-fi or fantasy sources, but then shows she doesn't understand what makes those things interesting. She's already shown that she doesn't know how to write interesting characters or dialog, so what else is there?  It's not all Meyer's fault though.  Andrew Niccol could have tried to explain some of these things better, or improve the dialog, but there didn't seem to be any attempt to liven this up.  The inclusion of all of these various elements just serves to distract you since they are so poorly implemented in the story.

Now despite everything I've said about the inconsistent, plot hole-riddled story, laughable dialog, and missed opportunities to do something interesting, I'd be able to give the film a pass if it wasn't so freakin' boring!  The Host is inexplicably over 2 hours long, and nothing of significance happens the entire time.  It's just talking, staring off into space, and forced melodrama.  I seriously struggled to stay awake for the last hour of The Host.


Poor Saoirse Ronan.  She's one of my favorite young actors (check out Hanna if you haven't already), but this is a film that is totally beneath her and wastes her talent, as well as Diane Kruger's.  The rest of the cast is extremely forgettable.  Even William Hurt seemed to be sleepwalking through this.

I could keep going, and I already took a bunch of crap out of this already too long review, but I think you get the picture by now.

I will say that with all of the unintentional humor, this is a movie that's ripe for a drinking game.  Every time someone tries to harm Wanda/Melanie, drink!  Someone says, "I love you.", drink!  Wanda/Melanie kisses someone, drink!  Wanda and Melanie have a head argument, drink!  You'll probably get alcohol poisoning with that last one.

The Host is quite honestly one of the worst films I can remember seeing in the past decade or so.  I can't believe I've about to say this, but I'd watch any of the Twilight films before having to sit through this again.  It's that bad.  Terrible dialog, ridiculous love triangle, and plodding story where nothing happens.  There is one way I can recommend this film: as a cure for insomnia.  It'll have you out within an hour.