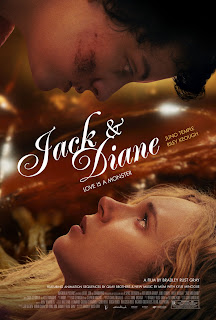 I never thought I'd see a movie about young romance with dialog worse than the Twilight films.  Congratulations to Jack & Diane for this accomplishment.

The movie starts with an unusual opening sequence of seeing blood in a bathroom, and then a monster's reflection in the mirror.  We immediately flash back to "Earlier" (that's what the movie tells us), where we see that Diane (Juno Temple) has lost her phone and goes into a store and asks to borrow theirs.  She sees Jack (Riley Keough) behind the counter.  Without any dialog or hint of anything, the next scene we see them hanging out.  Then, they are at a club where Diane is drunk off her ass despite only seeing her have a sip of beer (and neither is of drinking age).  I think Juno Temple is a talented actress, but I'm convinced she's never been drunk before, as I couldn't tell from her performance if she was trying to play drunk or her character was meant to be extremely stupid.

The film falls into a pattern of the couple sitting and staring at each other without saying much, or walking nowhere in particular.  Thirty minutes into the film, I knew almost nothing about the characters or why they should be together.  If anything it felt like Jack kind of forced herself on Diane, and she just kind of went with it.  I wonder how that would have played if Jack was a man. Jack came off as an extremely unlikable person.  She's rude and disrespectful to people for no reason.  Is this supposed to be her edge?  The only thing I knew about Diane was that she suffers from nosebleeds, and is moving to Paris in a week for school.  Yes, this is romance that takes place over just a week.

I couldn't even tell when this movie took place.  At first I thought maybe this was set in the  80's or 90's due to the use of tape decks and walkmen, and it was hilarious to see someone try to use a broken tape in a tape deck.  Are the people involved with this film so young they don't know how tapes worked?  But then I remember that the whole beginning of the film is about how Diane loses her phone and you see several other people using modern cellphones.  Was that tape deck stuff some quirky, hipster bullshit, or was this movie just not consistent at all?

The worst part of J&D is the weird, stilted (sometimes barely audible) dialog.  It's so bad and laborious I thought maybe they had gone to the Kristen Stewart school on how to speak more good.

This is an actual line of dialog from the film:

This continues on, and ends with Jack asking, "Am I freaking you out?"  Yeah, your inability to string a coherent sentence together is freaking me out.  To be honest, I started tuning out at this point, but I already got the general idea of what this movie was about: two girls that were supposedly in love that can barely speak.  Throughout the film, I kept saying "line" from Rifftrax when there'd be a long pause in the dialog.

Oh, and the whole terrible looking werewolf-monster thing from the beginning?  Throughout the film we see these weird stop motion sequences of what appeared to be hair growing through internal organs or something.  They are really distracting and never really addressed by the characters in the film.  At one point Diane has a dream about turning into this monster and eating Jack, but then only casually mentions it to Jack, who just blows it off and asks to go back to sleep.  If the movie is trying to tell us that love is turning them into monsters, cause...you know...like...metaphor..and stuff, then they are going a really bad job of it.  Remember, this takes place over a week.  I don't even get why these two are a couple, let alone see anything that shows me that they are dealing with some kind of super intense love.

What kind of movie is this supposed to be?  It has horror elements that aren't scary and the romance isn't believable.

I've seen the actors do better work in other films, so do I blame them for not being able to deliver a natural sounding line of dialog, or is it that Bradley Rust Grey's script and direction solely to blame?  Normally when I watch a film, if there's at least some redeeming quality about it, then I'm motivated to go back and watch other films from the same writer or director.  This movie makes me never want to watch anything by this guy again.

Jack & Diane is honestly one of the five worst films I've seen this year.  It's a nonsense love story about two girls you don't care about, and features the worst dialog I've seen in a very long time.  I'm actually not dreading seeing the new Twilight film next week now.  It can't be any worse than this. This movie actually made me angry at how boring it is and how it wasted my time.