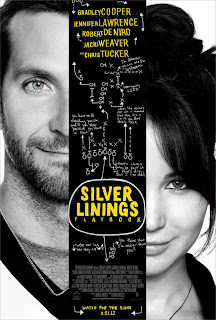 This movie almost made me sympathize with Philadelphia Eagles fans...almost.

Pat (Bradley Cooper) is released from a mental hospital under the care of his parents.  His mental meltdown cost him his job and wife, but he's determined to get his life back on track with a new, positive outlook on life.  Even though his wife has moved away and filed a restraining order against him, Pat has a one-track mind, determined to get her back.

Shortly after coming home, Pat meets Tiffany (Jennifer Lawrence), a young widow who's just as mentally unbalanced as he is.  The two of them form an unlikely friendship based around them needing a favor from each other:  Tiffany needs a partner for a dance competition, and Pat needs someone that can deliver a letter to his wife.  You might think it's a bad idea to get two crazy people like this together, but as the movie went on they seemed to balance each other out.  That's part of the charm of Silver Linings Playbook.

The movie started off a little 'off' for me.  Despite his new mantra of having a positive outlook and looking for the silver lining, you don't have a lot of reason to like Pat.  He comes off as delusional, stubborn and prone to violent outbursts.  They don't reveal what got Pat into trouble or what he's suffering from for about a quarter of the way through it.  Fortunately, this ended up working for the film, as when you do find out what big event got him into trouble, and the environment he was raised in, he immediately became sympathetic.  I obviously won't reveal what happened, but I couldn't help but think I would react in a similar way.  Does that mean I'm also bipolar like Pat, or just the 'AngryVader' you all know and love (or hate)?

You'll find that most of the people in the movie, Pat and Tiffany especially, have no real filter, saying pretty much whatever is on their mind, regardless of it's appropriateness. This leads to a lot of uncomfortable situations and humor throughout the film.  This was another area of the movie that I started on the fence about.  It felt too odd and quirky.  At the same time, I think many of us sometimes wish we could take off that filter, and just say what's really on our mind.  That aspect of the movie won me over around the same time I warmed up to Pat.

I also get the feeling this movie was set a few years ago.  They are huge Philadelphia Eagles fans (a fact that actually plays heavily into the plot), and thought I recalled a reference to DeSean Jackson being a rookie or it's after his rookie year, which would have been somewhere around 2008-2009.  Also, I believe they were on a playoff run, which would have put it around that same time, unless I'm to believe this is really a fantasy film.  Zing!  I don't really have a point with all of this, it was more of an observation.

None of this would have worked if it wasn't for all of the fantastic performances across the board. Bradley Cooper really impressed me here, and I think came away with his finest performance to date.  He really balances out all of his character's craziness with humor, and Pat manages to be both sympathetic and weirdly sweet.  He was a large driving force to getting this movie made (he executive produced), and I'm glad to see him step out of his comfort zone and take a chance on a movie and role he believed in.

As much as I like Jennifer Lawrence, I initially thought she may have been miscast, as she's playing a role older than her actual age, and then pairing her against a much older leading man.  Fortunately, she has great chemistry with Cooper, and her performance has a maturity about it, much like she showed in Winter's Bone.  I also think it was a smart decision to die her hair darker, which I think helped age her a bit.

Robert De Niro was also great as Pat's father.  In fact, this is the most I've enjoyed him in a while. He wasn't doing his typical role, where he plays a variation of a gangster or is just phoning it in (like in the Fockers movies), and his character had a lot of depth.  As you learn about him, you understand why Pat is the way he is.  His role isn't just thrown in either, as he has a large part in how the plot plays out.

The whole supporting cast is great.  Jacki Weaver is wonderful as Pat's month, and Shea Whigham also has a small role as his brother.  John Ortiz has some funny moments as Pat's best friend, and they even got Julia Stiles to play his wife.  But the biggest surprise of all, was how they managed to bring Chris Tucker out of hiding.  He hasn't been in a movie since Rush Hour 3, but he was a welcome sight.  His character has a running gag about breaking out of the mental hospital, and always seems to show up at the most random times.  He's very good in the role and used just enough that his gag didn't get old.

It's interesting how many of the characters are a little tough to take at first, but as the movie goes on you end up liking them.  I'm not sure if that was one of the points writer/director David O. Russell was trying to make, or just show a realistic take on mental illness.  It's not using the mental illness as a gag, and I liked how he challenged the audience with their perceptions.  He continues to be one my favorite directors that I wish made more movies.  This was adapted from the book of the same name by Matthew Quick.  It's a very eclectic story that has so many elements that normally it would be a mess, but Russell made something great out of it.

Silver Linings Playbook is a movie that surprised me.  I had heard a lot of good things, but didn't think it was going to live up to the hype.  Fortunately, it did and is one of the better movies of the year.  It's a definitely a sleeper that's going to generate a lot of Oscar buzz, but is totally deserving of all the praise.  It's sweet, funny, fantastically acted, and ends up becoming a surprisingly effective romantic comedy that isn't really a romantic comedy.