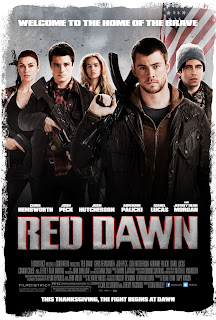 Believe it or not, until this week I had never seen the original Red Dawn before.  I know the movie is heavily quoted and there's a lot of nostalgia for it, but I was never all that interested in going back and watching it.  I knew I was going to see the remake though, so I streamed it on Amazon the other day just so it would be fresh in my mind when watching the remake.

After watching this new Red Dawn, I felt that it only had a few similarities to the original and that it's yet another totally unnecessary remake that doesn't really live up to the original.  Hollywood, you have to stop this.  There's no point to doing a remake of a beloved film if you aren't going to do something really great with it, or address the weaknesses of the original.  The changes made here actually made the original film seem more realistic.

The basic story is still the same, only this time it's North Koreans that invade a small town.  As the occupation commences, a group of teens, led by Marine Jed Eckert (Chris Hemsworth) form a a resistance force and fight back.  They still call themselves "Wolverines".  That much hasn't changed.

One thing that hurt the film was how rushed it all felt.  This is almost a half hour shorter than the original, so details are totally glossed over.  I don't recall hearing any mention of what town they were in until almost two-thirds of the way through the movie.  There's no explanation of how the North Koreans were able to overwhelm us and the extent of the invasion until about that time as well.  So, you're watching the whole film wondering where they are and how this happened.  Plus, it's never even stated what the North Koreans want or what their goal is.

This was the directorial debut of Dan Bradley and it feels like a first effort.  The script from Carl Ellsworth and Jeremy Passmore is to blame as well.  The lapses in the movie's logic is hard to get around.  The original was written by John Milius, who wrote movies like Apocalypse Now and Conan the Barbarian (also the original one).  These guys have written stuff like Disturbia and The Last House on the Left.  There's no comparison between the writing teams.

There's little to no character development.  You follow the same group of kids the entire movie and outside of Jed and his younger brother Matt (Josh Peck), you know almost nothing about any of these people, so we aren't given much to care about.  Matt's character in particular was the perfect example of having a someone you hate throughout the film, yet he's one of the good guys.  He's arrogant, selfish and impulsive, and his reaction to conflict is to either disappear or to ignore them. We're supposed to care about his growth, but you spend the movie hoping someone kicks his ass. Even members of the Wolverines didn't seem to have any emotion regarding their friends, and were relatively unfazed when someone got killed.  Another annoyance was that all the non-white characters are the first to die.

Perhaps the biggest problem with the remake is that the villains were changed to North Koreans.  I heard they originally planned to make them Chinese, but then were worried about the Chinese market, so switched it.  The problem is that are we really all that afraid of North Korea?  Do they actually have enough of an army to somehow overwhelm our entire military forces in a short period of time?  The original Red Dawn worked because it came out during the height of the Cold War, when there was genuine fear of nuclear war with the Russians.  You never feel any real threat from the North Koreans, and there nothing menacing about their leader (Will Yun Lee).  When a small group of kids doesn't seem to have any trouble causing havoc, how am I supposed to fear them?

This movie sat on a shelf for a few years due to the issues with MGM, and you can tell because of the age of the actors.  Both Chris Hemsworth and Josh Hutcherson look significantly younger, and I would imagine had this movie been made now, that Hutcherson would have likely gotten a larger role due to his popularity after The Hunger Games.  I'm sure their current fame played a part in the timing of this release as well.  I did find it odd that it came out during the holidays, as this felt like something that should have been pushed out toward the end of August or March.

It did deliver a bit on the action though.  I think the reason I didn't absolutely hate the movie was that when there was fighting, it was pretty decent.  It wasn't cheap looking, nor was it over the top.  They actually employed strategy during their attacks, so I appreciated that   It is PG-13, so it's not particularly bloody.

Another strength of the film was the performance of Chris Hemsworth.  It's easy to say this in hindsight, but you can see when watching how he was clearly destined for greater roles.  Although, his American accent still needed some work back then, as there were a few times you could hear his Australian sneak out from time to time.  I also liked his chemistry with Adrianne Palicki.

Red Dawn is yet another unnecessary remake that doesn't do anything to justify it's existence. It features a story with even more logic holes and less character development than the original, and has a very abrupt and unsatisfying ending.  It's just not all that fun or entertaining.  You aren't missing anything here, folks.