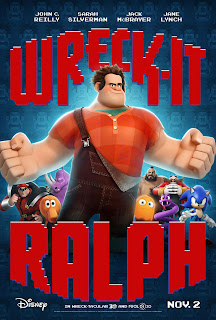 I miss the days of video arcades.  I'm all for progress, and I love how far computer games and consoles have come, but there was just something about the experience of going to the arcade with a pocket full of quarters, getting excited when a new game comes out, or standing around a game and watching someone beat it.

That's not what Wreck-It Ralph is about, but that's the kind of nostalgia it evoked while watching it.  There were lots of video game references that older gamers should get a kick out of.  They'll be over the head of younger audiences, but it illustrates how Wreck-It Ralph is an example of Disney at it's best.  It's great when you have a movie that's essentially for kid's, but it doesn't pander to them and there's enough for everyone to enjoy.  I rarely mention an executive producer, but in John Lasseter I trust.  His track record (with the exception of Cars 2) is insane, and I'm so excited at his potential involvement in LucasFilm and Star Wars.

Anyway, I'm getting way off track.  Even though he's the title character of the movie, Ralph (John C. Reilly) isn't even the title character of the game he's in.  He's been the 'bad guy' of Fix-It Felix, Jr., a Donkey Kong meets Rampage type video game, for 30 years.  Ralph's grown tired of his role, and just for once wants to be the hero.  Even the lesser characters of the game ignore Ralph to the point where he's not even invited  the 30th anniversary party being thrown.  They do, however, tell him that they'd accept him if he were to win a medal like Felix.  I wonder if Donkey Kong was treated this way.

Ralph abandons his game, called 'going turbo', in an effort to find his medal.  He hops from game to game, but spends most of his time in one called Sugar Rush, where he's sidetracked by Vanellope von Schweetz (Sarah Silverman), a character that has her own issues being accepted within her game.  Ralph reluctantly helps Vanellope in exchange for the medal.

Wreck-It Ralph sets up a detailed universe with it's own rules for how the characters and games behave when nobody is around.  When the arcade closes, they are free to mingle with characters from other games, similar to something like Night at the Museum, except good.  There are lots of nice touches, like how they handled a first-person shooter game, how many of the characters were animated, and how older games were treated versus new ones.  This is what was missing from Tron: Legacy, where the movie would have been more fun if it reflected how much things had changed with computers, rather than it just having updated visuals.  Speaking of the visuals, I really enjoyed everything about the look of the film.  The animation is top-notch, and it's extremely vibrant.  I didn't see this in 3D, so I can't comment on that this time.

It's also expertly voice cast.  Sarah Silverman's voice was just perfect, and it's almost kind of scary how much she nails the child-like voice of Vanellope.  John C. Reilly was also perfect for Ralph. He's not someone I normally think of when thinking of great voices, but it's a natural fit.  Jack McBrayer as Felix (if this guy doesn't have voice for animation, then I don't know who does) and Jane Lynch are also fantastic  I've often remarked about how sometimes a recognizable voice can be distracting and take you out of the movie.  That doesn't happen here.  In fact, the opposite happens, where I didn't notice the voices of many recognizable actors until reading the credits.  I was surprised to see names like Alan Tudyk, Adam Carolla, Mindy Kaling and Ed O'Neill all lent their voices to the movie.

The story by Rich Moore (who also directed), Jennifer Lee, Phil Johnston and Jim Reardon does fall into familiar Disney territory.  It's a minor complaint, as it's still a nice story and message.  I only wish we had gotten more of the game world and references.  When Ralph starts to jump between games, you only get to see a few before he lands in Sugar Rush, and that was a little disappointing.  Then again, it gives them a lot of options for potential sequels.  Let's see some Final Fantasy-type RPGs in there, and some team-ups from more games next time.  It interesting Disney is already involved in the Kingdom Hearts series as that's where I see this going.

Oh, and there's a nice post credit scene for the gamers.

Wreck-It Ralph is a fun, nostalgic film, that while falls into typical, family-friendly territory, still provides enough wit and originality to make it stand out over other animated films.  It's enjoyable for all audiences, and a movie that I think kids won't take out of the DVD player, but that just will give you more opportunities to catch all the references.  I highly recommend it.