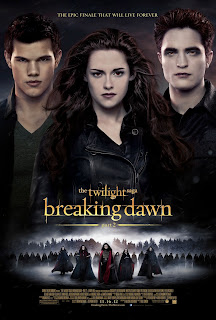 I'm only kidding.  Twilight: Breaking Dawn - Part 2 isn't that bad.  In fact, it's easily the best of the Twilight franchise, but that's like saying that Hurricane Katrina is only like the fifth worst natural disaster in the US.  Yes, the Twilight series is a natural disaster that the world may never recover from.

I turn around during the all the screaming during the opening credits, and I see a guy in a Raiders jersey sitting with his girlfriend with this look on his face.  I can only call it 'regret'.  There are moments where if you're willing to brave the crowds, you may find yourself regretting seeing this so soon, or plugging your ears.  Hell, I saw people who wanted to be there plugging their ears at points.

All kidding aside, it's really not that bad.  It's still not a particularly good movie though, but it seems that they finally realized how silly this all is and went with it.  There's actually a good amount of laughs in the movie, especially in the first half.  Some of this is intentional, and some of it is was more unintentionally hilarity.  I can't hate it too much for that, because even the audience seemed to be aware of it.

So, when we last left Edward (Robert Pattinson) and Bella (Kristen Stewart), Bella gives birth to Renesmee (a name I really hope that people don't start giving their kids), and is finally turned into a vampire.  Bella has to also deal with the weirdness of Jacob (Taylor Lautner) imprinting on their infant daughter.  Renesmee is rapidly growing (Mackenzie Foy), and the Volturi become aware of her and believe she's a threat.  Alice (Ashley Greene) has a vision that the Volturi are coming for her, so the Cullens gather other vampire clans to rally and prepare for the inevitable showdown. Carlisle (Peter Facinelli) hopes they can avoid a conflict, but where's the fun in that, right?

As more vampires arrive, we find that many of them have a superpower that normally you wouldn't attribute to vampires.  Even the others seemed to be surprised by what they could do.  It's like they were making an X-Men movie with how diverse their powers were, but then remembered this was a movie about werewolves and vampires.   Speaking of diversity, another thing that I found silly about this was that each clan that arrived was a total ethnic or cultural stereotype.  It's not offensive, but it was just kind of ridiculous at times.

While this is happening, Bella is learning to use her new powers.  This is a part of the film that irritated me in that Twilight tries to convince you that someone that's been a vampire for a few days/weeks is somehow stronger that someone that's been a vampire for years, or even decades. It goes against everything I've ever seen in vampire lore.  They also have to remind Bella how to be human again, and it was hilarious to see them remind Bella to blink, which is ironic considering how much Kristen Stewart blinked during the previous movies.  It felt like that was another example of the film being self-aware.

I wish I could tell you there's more to the story, but that's honestly all there is to it.  There's still no reason Part 1 and Part 2 couldn't have been easily edited into a single movie, but I get it: money. The pacing is languid for the first three-quarters.  It's just lots of boring conversation and people just setting around.  Many scenes go nowhere, and simply did not need to be in the film.  We all know what's coming, so just get to it.

Now this part is going to be a bit of spoiler, so skip to the next paragraph if you don't want anything spoiled. The ending of this film is a total cop-out.  I won't say exactly what happens, but the way it plays out, it basically means there was never any real consequence or sacrifice by anyone in the story.  It really undercut the film, and ruined the one truly tense sequence of the entire movie series.  It's especially irritating because this was the only part where I actually cared about what was happening, and then it's all gone.

I will say that that final 10-15 minutes of the movie are genuinely entertaining, and they got away with the maximum amount of violence you could probably throw into a PG-13 movie.  They even seemed to save all the best effects for that final sequence.  On the other hand, the special effects outside of that final battle were absolutely terrible.  They used CG in places where they could have just used practical effects, and it would have looked 10 times better.  What's wrong, were you trying to maximize profits by spending the absolute minimum you could to make the film? Seriously, there was stuff that looked worse than YouTube videos or commercials I've seen recently.  Hell, at one point they have a CG baby.  A baby!  You couldn't just use an actual baby? Plus, they used special effects where you didn't need to.  Vampires constantly use their super-speed power to simply walk across the room for no reason.  It didn't add anything to the story, and it just felt lazy.

I'm not going to say anything about the acting at this point, because you know what you're going to get by now.  I will say that I enjoyed more of the supporting characters.  Lee Pace (Pushing Daisies) has a small, but enjoyable role.  Billy Burke does well, but takes a back seat again even though he's kicking ass on Revolution.  Michael Shannon is back as Aro, and he's so over the top that it was hard to not enjoy his screen time. Even "Bunk" from The Wire shows up for a cameo.

I have to credit director Bill Condon and writer Melissa Rosenberg for finally making something out of this.  Granted, there's only so much they can do with the story and dialog since the source material is so weak, but they were at least able to minimize the awfulness as much as they could. I was ready to give up after what they did with Part 1.

Twilight: Breaking Dawn - Part 2 succeeds simply because it's the first of the series that I didn't hate.  It is honestly the best of the series and I guess there's something to be said for going out on a high note.  It does suffer from awful special effects, slow pacing and the same bad acting and dialog, but what else can we expect at this point?  Fans should be pleased, and if you're someone that gets dragged to this by your girlfriend, just stay strong until that last 15 minutes.