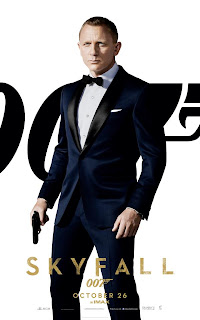 I don't want to be James Bond for Halloween.  I want to be Daniel Craig.

I have to confess that I've always had a 'take it or leave it' stance when it comes to the Bond series.  I watched many of them; liked some, hated others, but I don't geek out over Bond like others do.  I was one of the people that wasn't upset at the casting of Daniel Craig simply because I loved Layer Cake, but also because his casting got me interested in the series in a way I hadn't before.  Casino Royale was fun, Quantum of Solace was a disappointment, and now we have what I think is the finest of Craig's run: Skyfall.

Skyfall begins with a great opening chase scene that really sets the tone.  Bond is trying to recover a hard drive, but is shot in the process and presumed dead.  This failure has larger consequences, as the hard drive contains a list of undercover agents in the field.  An unknown hacker starts to expose the list and terrorize MI6.  This brings Bond out of hiding and to the aid of M (Judi Dench). M is dealing with issues besides the attack.  Gareth Mallory (Ralph Fiennes) is pushing M out the door, thinking she's past her prime.  At the same time, many think Bond has also lost a step.  Can these two still rally and stop the bad guy before it's too late?

I will say that after the opening sequence, the pace of the movie does slow a bit.  It's a little uneven at times, but not to the point where it's boring or you start to lose interest.  It's more of an issue of where it starts with such a great opening sequence, that it can't possibly keep that pace up for 140 minutes.  It's like a football game opening with a 107 yard kickoff return for TD, but then final score of the game is 14-3.

The pacing also brings up another issue for me in that we aren't introduced to the main villain, Raoul Silva (Javier Bardem), until the halfway point of the film.  He does, however, have a great entrance.  I was really excited to see Javier Bardem as a Bond villain.  He totally chews up the scenery, and is slightly over-the-top, but in a good way.  My only real complaint about Bardem is that he isn't in it more.  I also really liked that fact that his motivation wasn't something silly like sinking Silicon Valley, or an overused plot involving the theft and detonation of a nuclear weapon. It's much more basic than that.

It's also interesting that Silva is basically the flipside to Bond.  When you learn more about Silva, you find that he's actually a sympathetic character.  If things had gone differently for either him or Bond, you could see them switching places.  It's an interesting idea that I wish they would have played with a little more.

I had actually heard rumors that Ralph Fiennes was supposed to be an additional Bond villain. Maybe because when I think of him, I automatically think of Voldemort, but he seems like someone that would make a natural Bond villain   While watching the film I kept waiting for him to make that turn.  He does have a bit of an antagonistic role, but he has a surprising development to his character that I really enjoyed. The movie has a lot of shout outs to the Bond franchise throughout the film.

Another thing that kind of disappointed me was the Bond girls.  It has nothing to do with their appearance, as both women were beautiful, but it was mainly in that I felt they were underused. We're introduced to Sévérine (Bérénice Marlohe) and she has great scene with Bond, but then she's gone just like that.  She's absolutely gorgeous though, and I'm looking forward to her involvement in the upcoming Terrence Malick project.  Naomie Harris as Eve has some great chemistry with Bond, but disappears for long stretches of the film.  Like Fiennes though, she has a nice turn at the end of the film that Bond fans should get a kick out of.

I also enjoyed Ben Whishaw as the new Q.  Even though this Bond didn't feature much in the way of gadgets, it felt more modern and realistic as far as what they were doing technologically.  The movie even takes a shot at some of the gadgets they've used.

Let's not forget the star, Daniel Craig.  I liked how this time Craig showed more vulnerability and depth.  He's not perfect, and that made him and this whole world more believable to me.  I want him to stick around for a few more films, as I think he's the second best Bond after Sean Connery. On another note, does he go to the same awkward, upright-sprinting school that Tom Cruise goes to?  I couldn't help thinking he looked like a dork when running, and I hope they get him a spiriting coach for the next one.  Call up Usain Bolt.

The whole film is very slick and stylish.  Every scene looks great, and you never forget that you're watching a Bond film.  There's a very cool fight scene in the film that's done against a blue background and all you can see is their silhouettes, but you can still tell what's going on.  I saw this on IMAX, and while you don't need to see it that way, it's definitely a movie that looks great in the format.

Sam Mendes was a great choice to direct.  He was able to make a Bond film that stands on it's own, but still give enough shout-outs to previous films without overdoing it.  As I've mentioned before, he also kept the film grounded in reality.  It feels like more of a genuine spy thriller, rather than some kind of spy fantasy.  Normally, I often criticize a movie for having too many writers, but this time we have veteran Bond writers Neal Purvis and Robert Wade, plus Gladiator and Hugo writer John Logan.  I think this helped the movie stay consistent to the character and Bond universe.

I understand making a movie PG-13 to appeal to a broader audience, but I feel like that rating softened the film too much.  We're watching a film about a guy that's famous for bedding women and killing people, yet there's no nudity and very little blood in the film.  In fact, it seemed there was hardly any on-screen death.  You don't need to be gratuitous about it, but when you don't show people get shot, it kind of takes the impact away.  There was one particular time were someone is shot, and you aren't even sure what happened or if that person is actually dead.  I don't even need to point out scene I'm talking about, as when you see the film, you'll know exactly what part I'm talking about.

Skyfall feels like the start of another new chapter for Bond, and made me want more.  If you're a newcomer to the franchise, this is a great place to come in.  It's not the best Bond movie, but it's certainly a very good one.  Fans should be pleased, as well as people that just like a good action flick. It's fun, thrilling and sexy. All the things it should be.  Check it out.