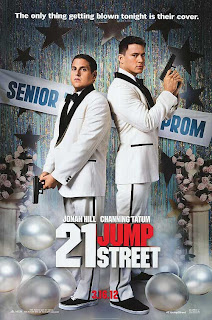 I'm writing this review in utter shock right now.  Why?  Because 21 Jump Street is actually a good movie!  The first time I saw that trailer, I was like, "Are you kidding me?  Another retread of an old TV show!"  I actually thought that trailer was kind of funny though.  However, after seeing it 10-15 times and seeing the same jokes over and over, I started to get the feeling that this was going to be yet another movie that showed you all of the funny moments in the trailer.  Plus, I am really not a fan of Channing Tatum.  Not out of any hate for the man or jealousy, but I just don't think he's a good actor.  Well, 21 Jump Street managed to do the impossible: it actually made me like Channing Tatum.

This is a good example of a movie overcoming the above mentioned point about trailers showing you all the funny stuff up front.  Plus, they ran that trailer in the ground, so it got to a point were it became unfunny and annoying.  However, many of those scenes from the trailer are done in the first 15 minutes of the movie, and even then the actual scenes used with a different line or were edited in a way to make them completely different in the context of the film.

The trailer does a good job of setting up the premise.  Two former high school 'rivals' Schmidt (Jonah Hill) and Jenko (Channing Tatum) meet up a few years later in police academy.  When they realize that their skills compliment each other - Schmidt is the brains, while Jenko is the brawn - they decide to work together and develop a genuine friendship.  This is one of the things about 21 Jump Street that surprised me.  It's actually very sweet at times.  When you see Schmidt and Jenko in high school, it wasn't so much to show you that they were rivals (as they weren't really), it was more to illustrate that they were both kind of losers in their own ways.

Anyway, once they become cops, they make a bust, but screw it up.  Due to their 'youthful' appearance, they get reassigned to an undercover program to have them pose as high school kids to 'infatrate' (misspelling intentional, you'll understand why after seeing it) a drug ring.  Once they get to the school, they do what they can to fit in and it all goes from there.

Another aspect of the movie I liked was the whole angle about fitting in and how high school can suck for some people.  As Schmidt had a rougher time in high school, he's looking at this as a chance for him to be cool, especially now that he has Jenko to help him.  On that flip side of that, Jenko quickly finds out that the things that made him cool back in high school don't apply anymore.  This leads to a role reversal with Schmidt now being the cool one where Jenko finds himself being a bit of an outcast.  Later leads to resentment and threatens their friendship, and the thing is that you actually care about their friendship.

There were lots of great 'meta' moments, especially early in the film that let you know that it's not taking itself too seriously.  21 Jump Street actually parodies a lot of things about 80's movies, teen comedies and buddy cop films.  They managed to do a really good job with all of this and keeping it fresh and funny.  Even when ridiculous things happen in this film, you are never insulted by them because it's all so good natured and it's not being passed off as realistic.

As I mentioned earlier, I actually liked Channing Tatum here.  I think they did a great job with his dialog and also having him make fun of himself.  Jonah Hill was fine, but he's basically doing what he does in most of the comedies he's in.  I'm not saying that's a bad thing though.  The supporting cast, many of whom you'll recognize for various comedies (Ellie Kemper, Nick Offerman, Brie Larson, Dave Franco, Rob Riggle) are all strong as well.  I was actually expecting to be annoyed by Ice Cube, but I found him to be really funny.  Everyone is great here!

Michael Bacall (Scott Pilgrim vs. the World, Project X) did another great job with the screenplay.  You can definitely see similar elements in his screenplay as with his previous films.  The story was co-written by Jonah Hill as well.  Good job guys!  This was directed by the team that directed Cloudy with a Chance of Meatballs:  Phil Lord and Chris Miller.  I think direction of the action scenes were a little sloppy, but they really got the comedy down, which was the point of the movie anyway.

Underneath it all 21 Jump Street is ultimately about the friendship of Schmidt and Jenko.  It reminded me of the better buddy cop movies of years past, with a pinch of John Hughes thrown in there.  Best of all, it's consistently funny.  I highly recommend checking it out this weekend.

4 (out of 5) Death Stars - 4 might be a little high, but I'm giving it an extra half-Death Star for surprising me.