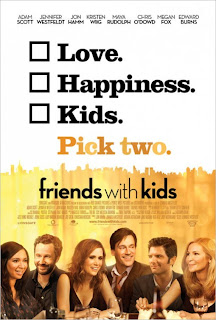 This is going to be a quick review as I find that I'm probably going to echo a few sentiments about this movie from my Jeff, Who Lives at Home review.

The premise of Friends With Kids might be a little out there depending on your perspective: two old friends, Jason (Adam Scott) and Julie (Jennifer Westfeldt), after seeing how having kids have affected the relationships of their mutual friends, decide that maybe the best course of action is to just have a kid together.  The hope is that this will get them past any messy divorce issues and allow both of them to still date and play the field.  The movie shows that they are both still looking for 'the one', but understand that their window of opportunity for having a kid is closing.  They agree to split responsibility down the middle.  What could go wrong, right?

Initially, it works out well for them, as it's treated almost as a business arrangement between friends.  They are both rational and mature about it.  This irritates some of their married friends, as they think it's a bit of a slap in the face to their relationships and wonder if they will be able to keep over the long haul.  As you may have already guessed, emotions do get invested and the relationship gets complicated.  This the main flaw of the film.  What starts out as a subversive look at 'traditional' relationships and having kids, ends up becoming just kind of a standard romantic comedy aimed at people over 30.

One thing that kind of bugged me was when characters talked about New York like the audience is all from New York.  I know movies can't 100% appeal to everyone, but there's a part of me that feels left out when very specific references are made to living in a certain city.  I imagine people from NY though might feel the same way about movies based in San Francisco or LA.  This is a minor point though and it didn't make or break the movie for me.  It's just a pet peeve of mine.

The movie is basically carried by Adam Scott.  If you've been a fan of his from Parks and Recreation and his other various movies, then this movie is the one you've been waiting for.  I think it's going to be a breakout role for him as far as being in more films.  He's kind of like a more serious, less snarky, Paul Rudd.

The cast is very strong.  It's essentially a Bridesmaids reunion with good performances from Maya Rudolph, Kristen Wiig and Chris O'Dowd.  They are all very funny in parts.  Although, I'm actually mad that Don Draper wasn't in it more.  He's shown that he has the comedy chops and I didn't feel like he got a chance to really show it.  Maybe because Jennifer Westfeldt his is real life girlfriend she avoided putting him in the movie too much.  I dunno, but I think we could all use some more Hamm.

It's runs on a bit too long, especially once you figure out how the movie is going to play out.  I think about  5-10 minutes needed to be trimmed to tighten it up.  Overall I thought Jennifer Westfeldt's story and direction were fine.  This is her directorial debut, but I think many may be fans of her previous writing for Kissing Jessica Stein (haven't seen it).  I hate to criticize her, but I think as far as the cast goes she might have been the weakest link.  I didn't think she was bad, I just think there a missing element between her and Scott as far as the chemistry goes.  Oh wait, Westfeldt could never be the weak link in a movie that features Megan Fox in any role.  Megan Fox just bugs me.

Despite the way the film wraps up, it does avoid a lot of the usual conventions of weaker romantic comedies.  How many times have you seen a romantic comedy where there's a conflict that would be resolved if the characters just had a five minute conversation.  Well, in this movie, characters actually communicate once there's conflict.  Because Friends With Kids avoids that flaw, it's conclusion does feel a little more earned.

I did enjoy Friends With Kids despite my issues with it, which really are minor compared to other films.  It's very funny in parts and has a great cast.  It's an above average romantic comedy with it's subject and setup, but the ultimate conclusion is what prevents this from being rated higher.  I do think it's worth watching, but maybe saving for a rental.