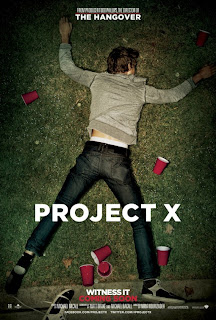 I reluctantly went to see Project X last weekend.  I'm not a big fan of all of these remakes of older films.  I always liked the old Matthew Broderick, Helen Hunt movie.  I really wasn't prepared to see a remake of it.  So, I'm watching this movie, I'm about 15 minutes into it and I'm getting confused because there's not a monkey to be found anywhere.  It's just a bunch of teens planning a party.  What is this?  Is this a prequel about Matthew Broderick's character?

Okay, I'm kidding obviously.  I was reluctant to see Project X though.  From the trailer all you see are some teens doing stupid stuff at an out of control party, a midget and bad music.  Really not my thing.  I almost talked myself out of going, as I was having a good time flirting (unsuccessfully, mind you) with my waitress at The Hopyard.  The movie theater was on my way home though, and there was a convenient show time, so I figured what the hell.

I actually don't have much to say about the movie as far as the story.  There's not much to it and the commercials and trailers tell you pretty much everything you need to know.  A small group of teens decide to throw a birthday party when the birthday boy's parents are out of town.  I did think it was a little unusual that the parents left town the weekend of their son's birthday.  Granted when you're in high school, you relish the times your parents leave town for the weekend, so maybe that was part of their gift to him.  Still, I thought it was a little weird, and maybe even a little irresponsible on the parent's part.

The characters are your typical archetypes for high school comedies:

- The birthday boy, Thomas (Thomas Mann).  He's the nice, sweet kid.
- JB (Jonathan Daniel Brown), the token overweight, goofy guy
- Costa (Oliver Cooper), the ringleader.  He's really the only unlikeable one, but at the same time, if they didn't have him, you get the feeling that the other two would never get out of the house.  It's more that he's a little arrogant (what teen isn't?) and lacks tact.
- Alexis (Alexis Knapp), the über hot unattainable girl...or is she?
- Kirby (Kirby Bliss Blanton), the cute girl next door that's Thomas' best friend, but also has a crush on.  He eventually screws things up with her.
- The jock that seems to pick fights with the main characters for no other reason that he's a jock and therefore supposed to be an asshole.

I thought I wasn't going to like the characters, but I thought they were pretty typical high school kids.  They really don't develop their personalities much in the movie, so I didn't have much of an opinion about them.  The characters, and story elements, are all pretty cliched.  Thomas even has a hot mom.  That's never been an element of teen comedies.  The only guy you really have a strong opinion about is Costa.  As I stated earlier, he might be a little overbearing, but I think his heart was in the right place.  He probably could use a good smacking at some point though.

One thing I did like was that they do actually show the aftermath and consequences of the party.  I think the movie might have bugged me a little more if they had just blown off that part at the end.

I thought I was going to be the cranky guy yelling at the kids to get off my lawn, but then I realized that I've thrown my own parties that have gotten noise complaints before midnight.  I have a few friends that always throw great, elaborate parties.  Nothing crazy like this, but maybe I was able to identify with the movie a little more than I initially expected to.

As tired as I am getting of movies shot in found footage style, I think that's what helped sell Project X.  I don't think I would have bought into it if this was just a normal, teen comedy.  There's just not enough character development to carry it compared to a movie like Superbad.

I think first time director Nima Nourizadeh did a decent enough job here.  It's not like there's much going on in the story or acting that direction would have changed how the movie came out.  It's kids at a party.  How much direction do they need?  "Act wild and yell!"  "Here, drink this!"  I'm a little more surprised to see that Michael Bacall co-wrote Project X, as he also co-wrote Scott Pilgrim vs. the World.

For a movie I thought I was going to hate, I ended up actually liking Project X.  Don't get me wrong, it's irresponsible and there's nothing redeeming about it.  However, there are lots of funny elements and I caught myself laughing more than I want to admit.  Perhaps I was aided by the amount of alcohol I had before watching the movie, but isn't any party made more fun by alcohol?  If you do go see it, I do recommend having a couple of cold ones and going with some friends.

...no monkeys were harmed in the making of this review.