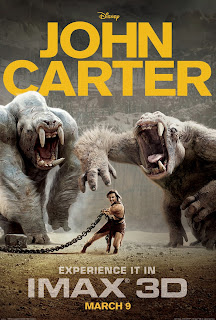 Movies like this are tough for me to write about.  I have no familiarity at all with Edgar Rice Burrough's book series.  In general, you shouldn't have to though because the movie should do a good job of telling you the story.  However, after watching John Carter I think it might have helped to have a little more familiarity with the material.  Although, I've heard from a few fans that the books have many huge differences from this movie, so maybe it wouldn't have helped.  In fact, based on what they've told me, the book sounds a hell of a lot more interesting than this movie ended up being.  While this book series is 100 years old, it's clear how this has influenced other works and the books deserve credit for that.  The problem is that we have seen it all before in other movies and it's been done better.

Be warned that this review is likely to be a little spoilerific, as I can't really explain my problems with the movie without going into a few details about the movie, so if you still plan on seeing this, you may want to skip to the end.

John Carter starts with Edgar Rice Burroughs (as an actual character in the movie) arriving at the funeral for his uncle, John Carter (Taylor Kitsch).  He's presented with one of Carter's journals.  As he reads the journal, you flash back to John Carter from a few years ago.  Carter, a recent widower, is a gold prospector just trying to find a big score and cash in at this point.  He manages to find a cave with gold and a mysterious medallion, but it ends up being some weird alien teleportation device.  Carter then finds himself on Mars (called Barsoom by the natives) where he is met by the Tharks, a race of green, tall, four-armed Martians.  Carter finds that he is able to jump very high and is super strong, essentially making him the ultimate warrior on a planet seemingly filled all kinds of war and conflict.

Then, there are two warring factions of 'Red Martians' (who are really just white people with really bad fake tans and lots of red Henna tattoos).  I was never quite clear of why these two groups were fighting.  The Tharks were apparently staying out of it, content to let the other groups fight it out and they'll take over after.

You finally have the Therns, a race of albinos (were the also Martians?) that can teleport and shapeshift and have superior technology, but are working behind the scenes, pulling everyone's strings.

So you've got all of these factions and species, tons of characters and sub plots.  You'd think it would all be interesting.  Instead, I found it all kind of lifeless and convoluted.  Many of the plot points don't hold up at all under even just a little bit of thought.  Here are some examples:

There's a thread involving the forced marriage of Dejah (Lynn Collins) and 'Kirk Cuddy' from Steel Dragon (Dominic West), but it's clear that his plan is to kill her and her people.  What is there to gain by going through with the wedding if you plan on killing all of them?  You don't need to marry her to do that.  On the other side, why do Dejah's people agree to the marriage when they'd gain more by just killing him?  Plus, Dejah is her people's best scientist, yet also a princess and warrior.  Can you throw a few more character traits in there?

Then, there's stuff like John Carter being a widower at the beginning of the movie.  He's clearly still mourning his family, but falls for Dejah almost instantly and it never felt like he had any reason to other than she's super hot.  When I hear that Carter being a widower wasn't even in the books, it seems like that was another unnecessary character trait thrown in.  The romance would have been easier to believe if he wasn't in mourning.

Another thing that bugged me was the race of albino aliens (which in the books I guess weren't introduced until much later in the series.).  They are everywhere at once and can shapeshift, yet are just trying to manipulate everyone.  For what purpose?  Why not just shapeshift and do it yourself?  You also appear to have superior technology.  Why give it to others?  Use it yourself!

Plus, when 'Sinestro' (Mark Strong, who's wasted here) eventually figures out Carter's powers come from his physiology and being from a higher gravity environment, why is he even surprised by this?  Weren't your people the reason for how the teleportation device got on Earth in the first place?   You see them on Earth both at the beginning and the end of the movie.  So, you had been to Earth, but somehow never encountered a human or bothered to notice the higher gravity there?  Plus, once you figured this out and you're trying to manipulate a war's outcome, why not kidnap the stronger humans and force them to fight in your war?

It just felt like they tried to cram three movies worth of plots and characters all into one movie  As a result, none of it fits very well together and the plot threads and characters aren't developed enough to be invested in any of them.  The movie is already over two hours long, so this really seems like something that should have been split into more than one movie.  I also thought that the movie was poorly edited and that caused some of the issues with having a harder time following what was going on.

I have to wonder what director and co-writer Andrew Stanton wanted to do here.  I'm more surprised than anything.  Granted this is is first live-action feature, but he's been involved in so many great Pixar movies (WALL-E, the Toy Story series, Monsters, Inc.) that I really thought he'd do a better job here.  When I see there were two more writers (Mark Andrews, Michael Chabon), I have to wonder if this is another example of two many cooks in the ktichen and I think it shows with having too many undeveloped plot elements here.

My friend said this reminded him of his disappointment with Tron: Legacy.  While I agree with that, I'm going to stick a little closer to home and say this reminds me a little more of The Phantom Menace.  It looks nice, but you just never feel invested in what's going on or any real threat or urgency.

As far as the look of the movie, I do think they did some interesting world building and there's some good looking action.  When there is action, I thought it was entertaining, but at the same time, I really wasn't invested all that much in the consequences.  I didn't care who was going to win and many times, I didn't even know who was killing who.

Speaking of the design, I'm kind of stealing this next criticism from something I heard on Adam Carolla's podcast recently, but this is something that bugs me about movies like this.  You see giant, technologically advanced machinery, beautiful airships that do all kinds graceful flying maneuvers, some races using advanced weapons and technology, but everyone was still dressed like a gladiator or Roman.  There's still swordplay and some using musket-like rifles.  I'm just not into the whole 'retro-futurism' thing.  It's bugged me in most all movies I've seen that use this style.

I wouldn't call this sci-fi either, but more sci-fantasy.  You pretty much have to throw the science out right away.   First, is the fact that a human can breathe on Mars.  Then, if you understand that Mars is farther away from the Sun, then, you'll also understand that it's colder there, but you see flowing water and everyone is scantily clad.  You multiple sentient races that all developed on the same planet with drastically different biologies and are at different stages of cultural development, yet all seem to speak the same language.  Speaking of, from what I hear in the books, John Carter learns the language of Mars over months, but in the movie, to simplify things he learns the language after drinking some magic water.  Um...okay.  I can suspend disbelief for certain things, but when it happens through pretty much the entire movie, it get's hard (phrasing!)

Despite the good effects and visuals, I didn't think the 3D did anything for the movie.  I saw it on IMAX as well.  Also, maybe it was the IMAX screen I saw it on, or it was just me, but I thought the landscape seemed to have a very unnatural yellow tint it.  Isn't Mars known for being the red planet?  It felt like everything should have had a redder, or rustier look to it.  It appears the 3D was done in post again, so I'd avoid 3D entirely.  When are movie studios going to get through their thick skulls that converted 3D sucks!  Didn't Disney learn from Tron: Legacy's lackluster 3D?

Taylor Kitsch wasn't bad as John Carter, but I didn't find him very interesting.  He was just missing that intangible thing that you needed for the lead.  I think maybe it's that he felt too young for the role perhaps.  I actually thought the performances, both live and voice, were fine for the most part, but again, if I don't really care about the characters, it's hard to care all that much about the performances.  It's not the actors fault though.  It's actually a very strong cast, but they aren't given much to do.

I hear the budget for this was $250 million?  Man, that is a huge investment for a movie that isn't very good.  I know it sounds like I hated John Carter, but I actually didn't.  It's just that despite the great visuals, there's nothing that wowed me here.  I didn't really care about the characters and there are too many plot threads going on for me to be invested in anything.  I've already heard that the director said that very little was edited out of the movie, so it appears we don't have an extended cut that might get into more detail to look forward to.  I'm sure I'll end up watching this again when it comes out on DVD.  It's a rental.