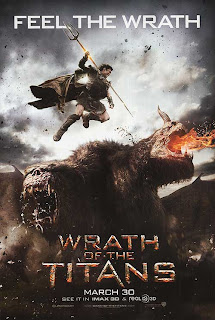 I was actually shocked when I heard they were making a sequel to the already lackluster Clash of the Titans remake. The remake was a movie nobody was asking for in the first place, it performed poorly and was reviewed poorly.  Despite that, they decided it was a good idea to make another. Do we at least get another good Liam Neeson meme?  Unfortunately, no.  In fact, this time around some random character actually says the line, 'Release the Kraken!'  Really?

The good news is that Wrath is better than Clash.  The bad news is that it's only marginally better.  I can pretty much sum up this movie into one word: flat!  Everything about the movie felt flat to me.  The dialog, the characters, the attempts at humor.  There's very little in the way of effective dialog or humor anyway.

While the effects are pretty good and there are some decent action scenes, you never feel any real threat or that the main characters are in any peril.  It doesn't help that the movie is pretty bloodless.  I can't buy in to a film featuring guys with spears and swords and that there's any danger when you barely see a drop of blood.  Granted, the lack of blood makes this something that you can allow younger kids watch, but if you like a little more maturity to your fantasy, you won't find it here.

This also suffers from the 'inconsistent powers' thing I hate in action movies.  Early on, Perseus gets pretty banged up by a creature and needs medical assistance after.  Throughout the rest of the movie, he's being hit with rock-smashing punches from gods and just popping up from them like it's no big deal.  Which is it?  You can be hurt or you're indestructible?

To illustrate the point about there being very little peril, the central plot of Wrath is that the gods are the ones in danger this time.  The movie begins showing you that Perseus (Sam Worthington) has rejected his destiny as a demigod and is content with fishing with his son.  Gemma Arterton couldn't be bothered with being in this, so her character has been killed off at some point, leaving Perseus a single father.  He's visited by Zeus who tells him that because nobody is praying to the gods anymore, they are losing power and this is causing the big, bad demons to break out of the underworld.  Zeus states that Hades (Ralph Fiennes) is attempting to resurrect Kronos, the father of Zeus, Hades and Poseidon (an unrecognizable Danny Huston).  It took their combined powers to stop him last time.  I don't understand how Kronos is anyone's father when he's this giant, lava monster.  His spawn are humanoids?  Anyway, Zeus wants Perseus to help, but Perseus just wants to fish with his son.  Oh guess what, stuff happens and Perseus is forced into action.

This movie is a 'God of War' video game come to life, expect that they took all of the fun, the interesting story and characters out of it.  You're better off simply playing a video game than watching this.  At least with the video game you'd be more invested in what was going on.

The main problem with Wrath is that there's nothing to give a shit about.  You've got this great cast and nothing ever happens to make you care about anything.  I mention Rosamund Pike, but she's barely given anything to do.  She might as well not been in the movie.  Bill Nighy played Hephaestus and I didn't even realize it was him until the credits rolled.  There's this scene towards the end where Liam Neeson and Ralph Fiennes' characters team up finally and for a second it's really cool, but then it's over just like that.  I don't want to hate on Sam Worthington, but he's probably the blandest actor in movies.  He's just so wooden and uninteresting.  You'd think an action star would be buff at least.

The 3D and IMAX do nothing for the film.  Clash of the Titans was notorious for being a bad example of converted 2D to 3D films looking terrible.  Wrath seems to have been filmed in 3D, but it still does nothing for the movie.  Save your money and watch it in normal 2D.

Director Jonathan Liebesman didn't do a very good job with the material.  He also directed the equally uninteresting Battle: Los Angeles.  As I've complained about other poor movies recently, this suffers from having too many people involved in the story.  Worse yet, they are mediocre writers at best.  Greg Berlanti (Green Lantern), David Johnson (Red Riding Hood) and first time writer Dan Mazeau.  Movie studios need to figure out that movies like this do not work when you have this many people involved, especially when their previous work was n6othing to get excited about.

Wrath of the Titans upgraded the special effects and the 3D from Clash of the Titans and it has better action.  However, the story and characters are still lifeless.  It's video game, popcorn entertainment at best.  I can't really recommend seeing it in the theater though.  Save it for rental.

I probably would have given the original 2 Death Stars, so I give Wrath of the Titans 2.5 (out of 5) Death Stars.