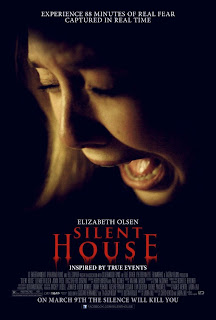 Okay, quick review tonight.  I got back from seeing Silent House a few hours ago and wanted to write about it while my thoughts were fresh.

Silent House is about Sarah (Elizabeth Olsen), her Father and Uncle.  They are fixing up an old house they own for future sale.  After her Uncle takes off to pick up some supplies, Sarah starts to hear crazy noises in the house and cannot find her Father.  It's clear after a bit, that she's definitely not alone in the house.  To help sell the premise, they establish at the beginning that the power in the house does not work and all of the windows have been boarded up due to squatters breaking into the house.  Additionally, it's a very old house, so the doors can be key locked from the inside.  So based on that, it's easier to accept that other people might be in the house and she cannot get out.

The cool thing about Silent House is that it's presented in a 'single shot' format.  This basically means you watch the entire movie in a 'single take' from only one camera.  There aren't any alternate camera angles and they never cut away to action happening elsewhere.  The camera basically follows Sarah from beginning to end.  From a technical aspect this is a really neat thing and it's done really well.  It also helps add to the claustrophobic feeling of the movie.  Every time the camera pans, you tense up thinking something is going to be around the corner or behind Sarah.  They nailed that aspect.

Speaking of the house, despite that this is called Silent 'House', a more appropriate title should have been called Silent 'Mansion'.  This house is HUGE!   It continues to expand as the movie goes on and at times the house seems like a maze.  It's also not a very 'silent' movie, so maybe they should have called it 'The Occasionally Loud Mansion'.  They probably would have had a harder time pitching that title though.

The other really good thing about Silent House is Elizabeth Olsen's performance.  She totally carries the film and is really the only thing worth watching the film for.  You have to wonder about the Olsen family as it seems that all of the looks, the acting talent and boobs all found their way to Elizabeth, rather than her older, twin sisters.  They must hate her for that.  I love her though.  Between this and Martha Marcy May Marlene, I really think Elizabeth Olsen is a future superstar.

There are a few irritating things that Sarah does during the movie that are the typical mistakes someone makes in a horror film.  This might frustrate you when you notice them.  It doesn't have anything to do with the performance as much as it's just stuff you get irritated with that people in horror films do.

The main problem with Silent House is that they give you plenty of clues as to what's going on early in the movie.  If I mention what they are, then it'll totally spoil the movie, so I won't do that.  You'll start to come to your own conclusions about halfway through.  I had eliminated the possibilities down to about three things by that point of the movie.  Even still, the eventual conclusion feels really awkward and disappointing.  I heard many grumbles form the audience as they were walking out about how stupid they thought it was.  I will say that the end is not as insulting as something like The Devil Inside, but it's just really clumsy on how they wrapped it up.

Another reason why I'm disappointed is what the writer and co-director Laura Lau, along with co-director Chris Kentis, were also the team behind Open Water, which is a movie I really did like.  Then again anything featuring sharks tends to affect me way more than other types of horror.  Again, I think they got the tone and technical aspects of the movie right, I just think they should have worked harder on the ending.

Oh and the whole 'inspired by true events' thing?  I'm going to call BS on that part.  Unless they are saying the fixing up of the house for resale part was true.  If so...assholes!

Silent House gets by on the creepy, claustrophobic vibe is sets.  I just wish the payoff would have been worth it. This is a good example of a movie that would work much better watching at home with all the lights off and the surround sound turned up.  It bums me out because a better ending would have put Silent House over the top.  Instead, it wastes a great performance from Elizabeth Olsen and ends up being a middle of the road horror film.