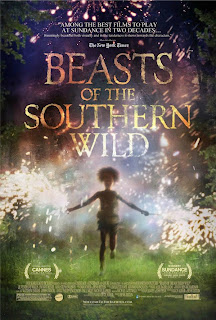 Every once in a while you see a movie that's difficult to talk about because it defies description and you spend hours or days thinking about it afterwards.  Beasts of the Southern Wild is one of those movies.

Beasts... follows Hushpuppy (Quvenzhané Wallis), a six-year-old living in 'the Bathtub'.  The Bathtub is a small area south of the levees in Louisiana forgotten by everyone else.  I'm guessing this is meant to take place after Katrina, as the events appear to be set in modern times, but time or dates are never mentioned.  The survivors have rebuilt their community, cobbled together from spare parts, and living off the land as best they can.  They are under constant threat of either being evicted by the government if discovered, or being flooded again, but they are either too proud, or too stubborn, to leave.  This is their home.

Hushpuppy lives with her father, Wink (Dwight Henry), who's trying to prepare her for the day he's no longer around and will have to fend for herself.  He's tough on her, but you understand why.  They even live in separate trailers, further building her sense of independence.  Wink explained to Hushpuppy that her mother swam away and hopes that one day she'll return.

For most of the movie you are just watching how they get by, and you'll see their strong sense of community.  Listening to the narration by Hushpuppy, she considers the Bathtub to be a magical place.  You'd think people living in these conditions would be miserable, but they are always celebrating, drinking, and appear to be happy.  For someone like Hushpuppy, she's never known another way of life.

Where the movie takes a bit of a fantasy turn is when a melting glacier releases a pack of ancient beasts called aurochs that are headed towards the Bathtub.  Throughout the movie I wondered if these creatures were a figment of Hushpuppy's imagination, or some kind of metaphor that was just beyond me.  I won't say how it plays out, but the movie leaves many things up to you.  Despite this fantasy element, the rest of the film has a very real and gritty feel to it.  The look of the film almost makes you think this could have been a documentary about people living in post-Katrina events.
As with many independent films, you have a large number of first timers or unknowns in the film.  This was an impressive debut for director and co-writer Benh Zeitlin.  This was co-written and based off a play called Juicy and Delicious by Lucy Alibar.  This effort in many ways reminds me a lot of last year's The Tree of Life.  Beasts of the Southern Wild is just as ambitious as Malick's film, and has that same feeling of being transported into these people's lives and watching what they are going through.

The performances Zeitlin got out of everyone is impressive.  Quvenzhané Wallis was incredible as Hushpuppy.  Despite only being six-years-old at the time of filming, she plays the role with a mix of innocence and toughness, but also has that 'wise beyond her years' quality.  This is the kind of performance that kids win Oscars for.  Dwight Henry was also great as Wink.  It's interesting that Henry was a baker before making this movie, and apparently doesn't have much of an interest in an acting career.  However, he's a Louisiana native and having lived through Katrina I think it allowed him to bring something to the role that another actor might not have.

Beasts of the Southern Wild is one of those movies that will mean different things to different people, and I don't think anyone will be wrong in how they want to interpret it.  You can watch this many different ways and get something different out of it each time.  It's an impressive vision from a first time director, and has wonderful performances from a small group of unknowns.  I highly recommend checking it out.