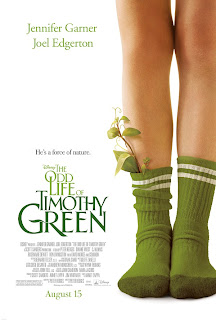 It's nice when the title of a movie doesn't mislead you. The Odd Life of Timothy Greenis an odd movie. Young Uncle Owen from the Star Wars prequels and Sydney from Alias...wait a second, I'm already getting off track. I'm starting over...

Jim (Joel Edgerton) and Cindy (Jennifer Garner) are a young couple living in a small town that is "The Pencil Capital of the World."  Jim works for the local pencil factory and Cindy works for the town's pencil museum.  As the entire town revolves around pencils, you know these guys see a lot of excitement and know how to party.  So, Jim and Cindy have been trying unsuccessfully for some time to have a kid.  However, the movie begins with them getting the bad news that it's just not going to happen.  Rather than adopt, they basically decide to get over it, but before doing that, they write down their wish list of what their child could have been.  They take these notes and bury it in a box in their garden, like you'd do with a dead hamster.  Can you imagine the outcome if they had flushed it down the toilet like a goldfish?

So magic happens, and they wake to find that a child, Timothy (CJ Adams), is now in their lives. The magic is never explained, and movie just basically asks you to 'shut up and go with it.' Not only did they never bother explaining the magic, they didn't even bother explaining to anyone how they have a kid now. "We adopted him, or something. Why are you asking so many questions? Are you a cop?"

Anyway, the magic, garden boy's obvious physical quirk is that he has leaves growing out of his ankles.  It's clear that Timothy knows something about the significance of these leaves, but leaves (haha...get it) everyone in the dark about it. From the first meeting, he addresses Jim and Cindy as mom and dad, and there doesn't seem to be any confusion on his part about his role or where he came from.  To protect him, he now has the tortured existence of having to wear socks everywhere.  However, they take comfort in the fact that he will always have a built in Halloween costume as Poison Ivy and will fit right in at toga parties when he reaches college.  Okay, maybe I made that part up.

One of the attributes they wished for him was to be honest to a fault, so he aways seems to know the right thing to say, giving him that 'wise beyond his years' trope.  As the same time, his knowledge seems to be completely limited to what they wrote on the cards, as he's extremely naive and lacks basic knowledge at times. When needed, the script will have capable of something he showed no aptitude for previously.  As with all magical children, he's here to solve everyone's problems, too. Throughout the film I got more of a vibe that he was an alien, rather than a magic child. There's a part that will give you a real Superman vibe.

Everything felt so forced.  Jim has this strained relationship with his father, Jodie Foster's dad from Contact (David Morse).  Jim goes on and on about how he wasn't a good dad, but the extent of his terrible parenting seemed to be that he never hung around for all of Jim's soccer games.  I can't say I entirely blame him, as I tend to find soccer boring and zone out, but it felt like Jim needed get over it.  He even admitted that he wasn't very good at soccer.  It just felt thrown in to add drama and really wasn't necessary at all to demonstrate any motivation about Jim's need to be a good parent.  I was able to buy a little easier into the relationship between Cindy and her sister (Rosmarie DeWitt) because it seemed more of a natural sibling rivalry of two people with different values.

It's not an issue with the performances.  I thought everyone was doing a good job and the leads had their charm.  I think Joel Edgerton might have been trying a little too hard, but that would have also been due to Peter Hedges direction.  The screenplay from Hedges, with story by Ahmet Zappa, is fairly predictable and is too cliched.  It really takes no chances at all.  There's musical number that got a good laugh from the crowd, but I thought was so cheesy I could barely watch it.  I'm a little surprised at this as Hedges has written or directed some much better films (Pieces of April, What's Eating Gilbert Grape, About a Boy).

Dianne Wiest plays the nasty boss of Cindy and I felt like her character was your typical mean old lady role.  I did like Ron Livingston as the pencil factory owner.  He plays a jerk boss, but I felt like he tried to milk some humor out of his part.  In another movie, it would have been more effective. Again, I'm not blaming any of the actors; their characters were all underwitten.

Timothy forms a relationship with Joni (Odeya Rush), and I think this the part of the movie I enjoyed the most.  I think if whole movie would have focused more on their friendship, like maybe a less quirky version of Moonrise Kingdom, it would have been a stronger film overall.  I think both kids had nice performances, and I think Odeya Rush is one to watch for in the future.

The ending was very abrupt and it sapped most of what emotion it should have had out of it.  I felt nothing from it, and was left wondering what the point was.  I don't mind a family drama, they can even be moving, but when the movie's ideas are so underdeveloped it's hard to get into it.  It's a shame because I liked the cast and it felt like were trying hard, but again, they weren't given much to do.

The Odd Life of Timothy Green is one of these sweet and harmless family dramas, but it's also very sappy and contrived.  Maybe I'm being too hard on a family film that's basically a kid's fairy tale, but it's just too simple and predictable.  There are too many missed opportunities to do better things with the characters or flesh them out in a more satisfying way.  This is suitable for everyone though, and is something you can watch with your kids without hating it.  I didn't hate the movie, but it just didn't work for me.  I did like the performances, but there wasn't enough to the story to really recommend.  It's a rental, and probably one your kids will watch over and over.