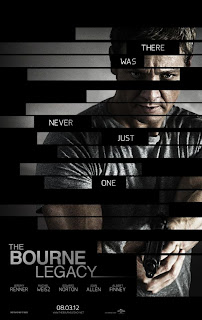 Rental month continues with the latest installment to the Bourne franchise.  I guess it would have to be a franchise now, as The Bourne Legacy is neither a reboot nor a direct sequel to The Bourne Ultimatum.  The events of Legacy seem to take place around the same time of the events of Ultimatum, but I'm not entirely positive of that, as it's been a while since I've seen any of the previous Bourne films.  In fact, I would strongly recommend that you refresh with at least Ultimatum before seeing Legacy if you have the time.

The movie starts with a shot of Jeremy Renner as Aaron Cross in the mountains retrieving an object.  Then, you're taken back to Stacy Keach and Edward Norton talking about shutting programs down and containment.  There are lots of callbacks and references to the previous films as they are doing this.  There are tons of code names and terms being thrown arond and it was tough to keep it all straight without a cheat sheet or something.  This goes on for a large portion of this 135 minute movie.  At times I felt like you could have called this The Bourne Meeting.  It really felt like much of this movie was Edward Norton's character talking about shutting things down, ordering people around and trying to do damage control.

While this managed to keep my interest, since it is a good cast and it's well acted, I kept wondering when they were just going to get on with it.  There are very few action sequences in the entire movie and most of the early scenes with Aaron Cross are very short.  It's not until almost the last 20-30 minutes until it really takes off.  I just wish there had been more of it or maybe quickened the pace the first hour or so.  They simply took too much time to tell the story they did.

Cross's main motivation in the film is to get more chemicals.  They explain that there are two types of chemicals these agents take: a green pill and a blue pill.  Once enhances the body, and the other their mind.  The catch is, if you don't take them at regular intervals or run out, your abilities degrade rapidly.  They mention these 'chems' a lot, and with all this talk of greens and blues, I couldn't shake the craving for M&M's throughout the film.  I had to pick up a bag after the movie.  Bring M&M's if you plan on seeing this.

Anyway, so Cross runs out of drugs and is simply trying to get more so he can retain his abilities.  That's it.  He's not trying to expose anyone, there's nobody he wants to kill, or anything like that.  This leads him to seek out Rachel Weisz, one of the scientists that used to do work with the agents.  Weisz is also on the run once the cover up operation is in effect and everyone starts getting killed.

What keeps your interest are all the performances.  Jeremy Renner is focused as Cross.  Renner is one of those actors that you just can't take your eyes off of even when he's not saying anything.  The scenes with him and Weisz were very interesting.  Edward Norton was good too, but they didn't really give him much to do and it kind of felt like he was just playing Edward Norton.  There's not much to any of these people as far as character development or personality.

It's unusual that this is called The Bourne Legacy when the screenplay by Tony and Dan Gilroy (Tony also directed) has very little to do with the the actual Bourne book of the same name.  The story is after the original director backed out of Legacy, Matt Damon did too - MATT DAMON! - so they went back to the drawing board and decided to do another movie set in the same universe, but not actually about Jason Bourne.  I actually don't mind that they did this.  It opens up the possibility of bringing in other actors or going down different paths if they do additional movies.  At the same time, they could have simply continued with the Bourne story and just cast different actors, similar to what they do with Bond.  Oh well...

While I don't think The Bourne Legacy is a bad movie, I was a little disappointed.  It's strong cast keeps you interested, but there's too much behind the scenes action and not enough focus on the main character.  It's slowly paced and doesn't have the same punch (literally) as the previous films.  This is something much better suited for a rental.