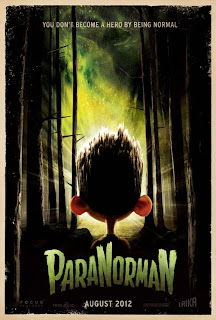 On the surface, Norman (Kodi Smit-McPhee) seems like a pretty normal kid.  However, he has odd ability: he can see and communicate with the dead.  This has made him an outcast. He's bullied at school, and even his own family gives him a hard time and wishes he would be 'normal'. His only friend, Neil (Tucker Albrizzi), is just as much of an outsider as he is.

Norman continues to have visions that something terrible is coming, and when the small town you live in has a witch theme and history of witch executions, you know that can't be good.  He's warned by his uncle (John Goodman) that he must perform a ritual by sundown or the dead will rise.  Norman is joined by his sister, Courtney (Anna Kendrick), Neil's older brother, Mitch (Casey Affleck), and Alvin the bully (Christopher Mintz-Plasse) to stop the threat before it's too late.

The first thing you'll notice about this movie is its unique design. Everything from the houses, the cars, and even the character's faces, are a little off-center and asymmetrical.  It's simply a gorgeous movie, and the best stop-motion animation I can recall. I was initially concerned about seeing it as sometimes my eyes have difficulty focusing when the animation stutters, and it didn't help that the theater's projector was way too dim.  Replace your projector bulbs!  My initial concerns about it went away quickly once my eyes adjusted though.  One of the things I really loved about the use of this type of animation was that it gave the film a tangible quality.  The characters and sets had more weight and depth compared to how a CG-animated movie sometimes feels.

I was also surprised at how funny the movie was.  There's lots of referential humor to other horror films and sight gags that made me laugh.  Some of the humor felt directed at older audiences though.  While this is a movie that all ages can enjoy, some parts might be a little too scary for really young kids.  I saw a lot of kids sitting in their parents laps during some tense moments.  It's not bloody and there aren't any jump scares, but use your own discretion as to whether you think your kids can handle it.  Most of the kids in the audience seem to have adapted to the movie about halfway through.

The voice acting by the cast is great.  Outside of a voice or two, one of the things I love about an animated film is when they use recognizable actors, but you still can't quite place who the voice belongs to.  The voices all fit the characters well and you aren't distracted by them.

Sometimes I don't notice the score of a film, but the music of the movie was another aspect of ParaNorman that really stood out to me.  It fit the movie perfectly.  Plus, any movie that manages to squeeze in Dizzee Rascal's "Fix Up, Look Sharp", scores points with me.

It has a very powerful ending. At it's heart there are some poignant messages about acceptance, bullying and being an outcast. The movie doesn't hit you over the head with its message though. The basic story is one that's been told a ton of times, where the oddball/misfit/outcast is the one that has the power to save us, but with ParaNorman it felt fresh and it builds to a satisfying payoff. You have to credit writer and co-director Chris Butler with his work here.

I liked ParaNorman a lot more than I was expecting to. It's a funny and great looking film that everyone can enjoy. The voice acting is top notch and the film gives you a nice message that's important, especially for kids.  This is worth a matinee.