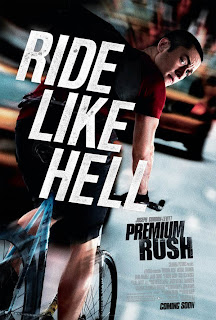 I need to start riding my bike more.

I was a little worried about seeing this. First, it's a late-August movie, and with a name like Premium Rush, you might think this was a movie about surfing or a new flavor of Mountain Dew. Even when a movie stars two of my favorite actors, The JGL and Michael Shannon, you have to wonder if this is just a late-summer paycheck. Actors have to pay their mortgages, too. Plus, the trailers didn't really look all that compelling. I mean, it's a movie about a mike messenger getting chased all over.

Fortunately, Premium Rush is an entertaining film. It's a throwback movie if there ever was one. Veteran director and co-writer David Koepp managed to take a pretty basic premise and turn it into a fun, fast-paced thriller.

The title does serve as a double meaning, as it's both a reference to rush delivery (actually mentioned by name in the film), and the rush you get from riding your bike at high speeds where the wrong move can get you killed. Wilee (Joseph Gordon-Levitt), a recent law school grad, has no interest sitting behing a desk all day or wearing a suit. He prefers to chase the rush he gets from riding, and makes a meager living as a New York City bike messenger. He has a philosophical view of his riding and enjoys the risk. He's such a purist that he rides a low tech bike with no gears or even brakes, because breaking gets you killed.  Wilee wouldn't have it any other way.  His fellow co-workers, and girlfriend Vanessa (Dania Ramirez), all think he's nuts and needs to slow down.  He's the best at what he does though.

A friend of his, Nima (Jamie Chung), contracts him to make a small delivery, but this immediately puts him in the cross hairs of Bobby Monday (Michael Shannon), who really wants what he's delivering.  Monday relentless pursues Wilee with the tenacity of a Terminator, and Wilee doesn't understand why he wants it so bad.

As far as thrillers go, you aren't going to get any real surprises here.  The story stays on it's bike path from beginning to end.  More is revealed through a series of flashbacks that show you the events leading up to now, but also give you a break from the action.  You do get a rush from the film, as it's extremely fast-paced and you get invested in what is going on.  Similar to what I said in my The Expendables 2 review, I left this movie wanting to dust off my bike and take it for a spin. I'm not going to be doing any of the crazy moves seen here though.  The bike stunts here are great, and the way some scenes were shot you do get a real feeling on the speed and danger of it all.

Another really cool thing they did is at times they'd show some scenarios where Wilee would have to map out his route or plan out which way to go when it looks like he was running out of room.  Then they show you how each scenario would have played out.  It's similar to stuff you've seen in Sherlock Holmes or even Next.  They don't overuse this, so it doesn't get old or feel like too much of a gimmick.  I thought it was a nice touch.

It's ironic that main character's name is Wiley, as in coyote (he even makes a joke about it), as he's really The Road Runner being chased around.  He's always narrowly escaping, while pulling of moves that would get a normal person killed.  It felt like something you used to watch on Saturday morning. In addition to being chased by Monday, Wilee is also pursed by a bicycle cop, and harassed by a co-worker, Manny (Wolé Parks), who not only wants to prove he's better than Wilee, but he wants his girlfriend, too.

Speaking of his girlfriend, that's one of the elements that felt forced here.  From the opening moments, there's conflict between Wilee and Vanessa, and it just felt thrown in to add drama. They do a really weak job of explaining why they are having issues, and by the end everything is fine again without any discussion between the two.  Also, the way some of the characters were related to each other was a little clunky.

What makes this movie stand out is that is does have a good cast and the performances are strong.  The JGL always delivers and this is no exception.  I absolutely loved Michael Shannon's performance.  His character is totally ridiculous, but he's so completely over the top and corrupt that it was just fun to watch.  It's the kind of role where I don't think a different actor would have been able to pull it off.  I also enjoyed Wolé Parks as a foil for Wilee.  He's another character that could have felt thrown in there and unnecessary, but it worked.  Former The Daily Show correspondent Aasif Mandvi has a small, but funny role as the dispatcher for the messenger service.

After I saw The Apparition a few days ago, another moviegoer expressing his disappointment in that movie simply said, "I should have gone to that bike movie instead."  Yes, we both should have.

Premium Rush is fun film with lots of great action, some unexpected humor and good performances.  If you've ever wondered a Road Runner cartoon acted out by humans looked like, this would be it.  It caught me by surprise and I enjoyed it.  It's a nice movie to catch if you're bored this weekend and just want something fun to watch.  Totally worth a matinee.