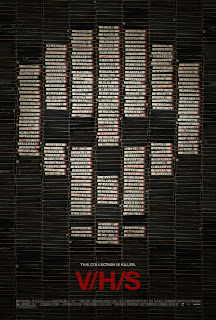 How can a movie simultaneously revive one type of horror film and kill another?  That's the conundrum of V/H/S.

As a kid I always loved horror anthologies like Creepshow, Cat's Eye or Tales from the Crypt.  Sure, they were a mixed bag, but there was usually at least one story that really stuck with you and were fun to watch overall.  When I heard that V/H/S was a compilation of several shorter stores, and that they were all directed by several up-and-coming horror directors, I was really excited to see it.  Plus, I'm the guy that usually criticizes horror films for stretching an idea to a feature length film that would work much better as a shorter story.

The main story begins by following a bunch of of douchebag punks filming themselves bust up abandoned houses and assaulting women, forcing them to show their boobs.  Right away you don't like these kids, and hope they die by the end.  They are hired by an unknown person to break into a house and steal a particular video tape.  They break in and find the occupant has died in his chair.  All of the video tapes are unlabeled though, so while the others explore the house, one of the guys watches a few of the tapes, which sets up how they move from story to story.

Unfortunately, they are all shot in handheld, found-footage style.  As a result, they look even worse than just watching a worn out VHS tape.  If you're someone that's already bothered by found-footage movies or shaky video camera work, then this movie will really bug you as it takes that concept to the extreme.  Another huge complaint I have about the movie is that in several of the stories they are using cameras or technology that is very modern compared to VHS.  You'll see very small hidden cameras, fairly modern handhelds, and even Skype chatting.  Yet somehow these stories got converted back to old VHS tapes?  It's very inconsistent use of technology, and something we're starting to see more and more in found-footage films lately.  Lack of attention to detail reeks of laziness.

It's not all bad though.  Some of the stories work well, the first and last story in particular, and there are a few genuine scary and freaky moments.  I'll briefly talk about each story, so there will be minor spoilers ahead.

The first story, written and directed by David Bruckner follows a bunch of 'bros' going out and trying to pick up a few chicks and taking them back to their hotel room.  One of the women they bring back is clearly a little off, and red flags should have been raised before they even got her back to their place.  Her behavior becomes stranger as the night goes on and builds to a climax.  It's one of those times where the anticipation of what's going to happen is scarier than what actually happens.  This was one of the more effective stories though, as the girl was creepy and you're interested to see how it plays out.  It was a good story to kick off the anthology.

The second story, by Ti West, follows a couple on their second honeymoon.  They meet a strange girl that asks for a ride, but they decide not to.  The mystery girl somehow breaks into their room as they are sleeping and messes with their stuff.  Then, the story takes a bizarre turn that really doesn't make much sense.  This was the weakest story of the film.  One thing that bugged me was that while the girl was 'sneaking' around in their room, she was turning lights on and shining the camera light on their faces as they slept.  These guys must be the heaviest sleepers in the world, not waking up even when someone shines a bright light in their face.  I was also surprised after to see that this was Ti West's story, as I've liked his movies.  In fact, I actually thought he had directed a different story, because it fit more with the films he's done.  It seems like a wasted opportunity for West, because I know he's capable of better.

The third, by Glenn McQuaid, called "Tuesday the 17th", is a play on the slasher in the woods story.  It follows a group of teens that head to a lake.  They start getting killed by an unseen person, and by unseen, I mean it looked like the Predator.  For some reason the killer shows up only as a static blur, and this is never explained.  Additionally, you find that the motivation for them going to the lake didn't make a lot of sense considering the outcome.  This one was at least gory.

The fourth, by Joe Swanberg, features a couple having a Skype chat (again, I'm curious as to how a Skype chat ended up on a VHS tape).  The girl is complaining about a weird bump in her arm, and that she believes her apartment is haunted.  You'll see that something is going on in her place, but it's not what it seems.  There were a few scares in this one, but this was another story that when you get to the conclusion it's not explained at all and didn't make any sense.  I will say that this was the one story where I sympathized with the victim.

The last, by Radio Silence, is about a group a guys heading out for a Halloween party.  They get to the party house only to find that nobody is there.  The let themselves in and explore the house, eventually discovering something happening in the attic.  At this point, it actually got really creative with the effects they use in the house to make it appear haunted.  This was the best story of the five, and it's interesting to note that it appears the movie was edited to put this as the last story, since it's the strongest.

You'll notice the editing, as the resolution to the main, containing story happens before they show you the last short story.  Spoiler: they all die.  Nearly everyone in the movie dies.  With everyone dead, who was around to put the tape in the VCR and watch the last story?  The main story was directed by Adam Wingard, and I think the editing of the final segment of the film really undermined his part of the story, but you didn't care about them anyway.

That's the other big problem with the movie as a whole.  There's no reason to care about any of the characters in any of the stories.  In some cases, not only do you not care, you're actually glad when they die.  As with other found-footage movies, the segments feature all unknown actors, so the acting is all over the place, which makes some harder to watch.

Overall, it's just not all that scary  I always watch horror movies in the dark, and when I'm genuinely creeped out by one, I'll have difficulty sleeping or turn all the lights on after.  The few scares were cheap jump scares, and they only worked because the pacing practically lulls you to sleep.  V/H/S is two hours long, and the only reason why it's easy to get through is that you know each story is only about 20-25 minutes, so you can take a break and know that you don't need to remember anything that happened earlier.  It is gory and there was a surprising amount of nudity, so at least it's a horror film that satisfies the gore and horror movie boob quota.

V/H/S bummed me out.  It's a good concept and had a few moments, but overall it's way too uneven and most of the stories were poorly written and acted.  Plus, the found-footage aspect is really played out, and it looks worse here than in other films shot in the same style.  If you really like horror films, I think you'll get something out of a few of the stories, but this isn't something to rush out and see.  Since only 2 out of the 5 stories worked for me, that's the rating I'm gonna give it.