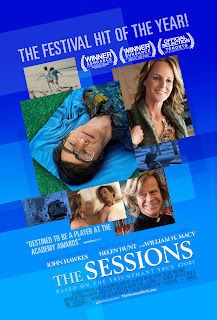 And you thought the 40-Year-Old Virgin had trouble getting laid...

Mark O'Brien (John Hawkes) is a writer and poet living in Berkeley, CA back in the late 1980's.  Mark was stricken with polio back when he was six, and is paralyzed from the neck down, needing use of an iron lung for most of the day.  After writing an article about sex with the disabled, Mark decides at the age of 38 that it's time to lose his virginity.  As a deeply religious man, he first seeks the blessing of a Catholic priest (William H. Macy).  He's a little put off by the request at first, but says to Mark, "I know in my heart that God will give you a free pass on this one."

Mark still has sensation and his equipment works, so it's just a matter of finding someone.  He contacts a sex surrogate, Cheryl (Helen Hunt), to help him explore his sexulalty.  I've never been able to quite wrap my head around the concept of a sex surrogate, and The Sessions didn't really do anything to help me understand it any better.    You do see a little bit of Cheryl's home life and that she's married, but her husband doesn't seem to have any issue with it either.  Cheryl takes a very clinical approach, rather than a sexual one, so she clearly has the ability to detach herself from the feelings that many have about sex.  Cheryl does say that to prevent attachment, they can only have a maximum of sex...um, I mean six sessions.  This gives you an idea of where things are going to go, but it doesn't turn out quite like you'd expect.

You might think with that kind of premise The Sessions would be very heavy-handed.  While there's some uncomfortably frank discussion of sex, and a surprising amount of nudity from Helen Hunt, the overall tone of the movie is very lighthearted.  This is primarily due to the wicked wit and charm of Mark; it's like his superpower.  He always seems to be able to say the right thing at uncomfortable moments to get everyone laughing.  You see this with nearly everyone he interacts with, from his newest caretaker (Moon Bloodgood) that initially seems very standoffish, to Father Brendan (Macy), who becomes so invested in Mark's adventures that he begins to visit him outside of the church just to get updates.  You get invested in Mark's story, too.  It's impossible not to like him.

The Sessions is an extremely funny movie.  Some of this is born out of all of the uncomfortable situations, but mainly because how funny Mark is and watching his interactions with everyone. John Hawkes is almost unrecognizable as Mark. I can't really call it a physical transformation, like Christian Bale's in The Mechanic, as he's always been a skinny, veiny bastard, but it was an impressive bit of physical acting.  He could only move his head small amounts, and had to use a pencil to do things like dial a phone and flip the pages of a book.  Hawkes has always been one of the best actors that most people haven't heard of, and this is an extremely sincere and sympathetic performance.  Your heart just breaks for the guy.  You get so much out of his performance, despite it all being from the neck up.  I know I'm going to be saying this a lot over the next few months, but it's another Oscar worthy performance from Hawkes.

William H. Macy is also great. He's primarily the straight man to Mark, but he mines a lot of humor out of his performance, and his interaction with Hawkes as their friendship builds are some of the more enjoyable parts of the film.  Helen Hunt's performance is also very brave.  With all of of the nudity the role required, you'd think maybe she would have shied away from the camera.  Hunt goes for it and very much seems like a therapist that is completely comfortable with her body. She really puts herself out there emotionally as well.

Writer/director Ben Lewin, who's also a polio survivor, based this off the real life experiences of Mark O'Brien after reading an article he wrote about seeing a sex surrogate.  He then worked closely with a few people in O'Brien's life.  I think he did a great job balancing all of the elements of the story, and treating the subject matter with respect and perspective.  It's funny without being silly, and emotional without being melodramatic.  This feels like a tribute to the man.

The Sessions wasn't what I was expecting and that's a good thing.  Despite the uncomfortable nature of the subject matter, it's a sweet and funny tale of a brave man exploring his sexuality and trying to find love.  It's an emotional film but worth the ride.  I strongly recommend checking it out.