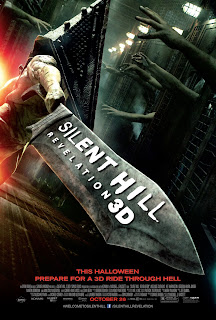 Welcome to another round of Video Game: Random Noun - The Movie.

You have to love when a movie contains 3D in the title.  It helps you understand what the marketing focus of the film is.  Unfortunately, the highlight of the 3D takes place in the opening credits, and then it's all downhill from there. It's safe to say you can skip the 3D version of Silent Hill: Revelation.

I don't actually have much to say about Silent Hill: Revelation.  It's largely a mess of a film, and there just wasn't much to care about.  Apparently this was based off the game Silent Hill 3, which I haven't played, or any game of the series, so I can't comment on how faithful it is.  I have a feeling that playing the game with the lights off would be a scarier experience than watching Silent Hill: Revelation was.  This movie is scare-free. At least the first Silent Hill had some creepy atmosphere and some imagery that stuck with you.

Anyway, we catch up with Heather (Adelaide Clemens) and Harry (Sean Bean), and find they've been moving around a lot and changing their identities.  Heather has dreams about Silent HillI, despite not having any memory of the place, and Harry warns her to never go there.  Note that even the characters in the movie warn to not go to Silent Hill.  Heather also starts her first day at a new school, where she's immediately made fun of by a fellow student when asked to introduce herself (an example of some of the terrible dialog throughout).  Way to welcome the new girl, bitch. But then Heather one-ups her by basically telling the entire class, "I don't want to know you, and I don't care about any of you."  Nice girl, huh?  Really gets you behind her character.  In an amazing coincidence, another new student starts the same day (Kit Harrington), and takes an unusual interest in Heather despite her "piss off" speech.  His interest in her, and that fact that he's clearly in his mid 20's, should factor into the plot later.

Harry disappears and Heather knows she must go to Silent Hill to find him.  I'm a little confused about the rules of Silent Hill.  We're reminded that Rose (Radha Mitchell) from the first film is still trapped in Silent Hill and cannot get out.  Yet throughout the film nobody else seems to any difficulty with this.  Early in the film, a creature from Silent Hill attacks Heather and a private investigator (Martin Donovan) that warns her about a cult that's after her.  When Heather arrives later, she finds a few captured women that I guess randomly wandered into town.  If creatures and people can get in and out at will, what's so special about Silent Hill then?

There's lots of exposition and long stretches where nothing happens.  It's actually quite boring and felt like a much longer movie.  You're just waiting for the next creature effect or Pyramid Head to show up again.  While there are some interesting visuals, I never felt any impact with what I saw. It's the same problem I have with the Star Wars prequels.  With nothing but greenscreen to act against, the actors don't convey any sense of threat or urgency.  When there's the big showdown at the end, you're basically watching two creatures from a Hellraiser film that you know nothing about duke it out.  I didn't care who won.

Despite bringing back a lot of the actors from the first film, and it's actually a pretty strong cast overall, much of Silent Hill: Revelation felt very amateurish.  Carrie-Anne Moss shows up looking like one of those albino twins from The Matrix, and then you've got Malcolm McDowell playing yet another role that seems beneath him.  I really can't blame the actors though, as the dialog they are forced to say is just awful.  Plus, the direction is all over the place.  For example, at one point Sean Bean loses his accent for a few lines, and they didn't bother to do another take?  Fix it in post?  Did anyone even notice or care?  Writer/director Michael J. Bassett seemed to miss a lot of what worked about the first film.  Not that first film was a masterpiece, but at least I got more out of it.

Oh, and spoiler alert - no Sean Beans died in the making of the film.

Silent Hill: Revelation 3D is a bad movie.  It's a decent looking film, but devoid of any substance or fun. The story is a mess, the dialog is terrible, and a waste of actors capable of better.  Stay away from this one.