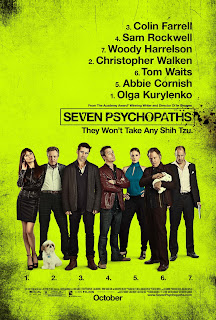 When it comes to movies, psychopaths are just more interesting, and this movie has seven of them.  Seven for the price of one!  But, wait, there's more...

Marty (Colin Farrell) is a writer that's struggling to finish a screenplay titled "Seven Psychopaths".  It's an example of coming up with a great title before you've figured out what the story is.  He hasn't even figured out who all of the seven psychopaths are going to be.  His best friend Billy (Sam Rockwell) desperately wants to help Marty write the screenplay and tries to inspire him any way he can.  Billy also runs a dognapping scam with his partner Hans (Christopher Walken).  Hans is using the money to pay his sick wife's hospital bills.

Things escalate when they kidnap the Shih Tzu of a local mob boss, Charlie (Woody Harrelson).  Charlie will stop at nothing to get his dog back and goes on the warpath tracking them down.  It doesn't take too long before he figures out who's behind the kidnapping, but finding them is a different story.

Seven Psychopaths is a good example of when the trailer does a good job of not revealing too much about the movie or even cluing you in as to what kind of movie it is.  I'll try not to spoil it for you, but forgive me if I give too much away.  The movie has a very meta quality to it.  As it's a movie about a guy writing a screenplay for a movie of the same name, you get that whole movie within a movie thing.  There's lots of discussion between the characters about the movie, and you think that Marty should be able to draw inspiration from all the craziness around him.  You may wonder by the end if you're watching the actual movie Marty has written, or is the movie just about him writing it.  I'm more in line with the second, but the movie has enough ambiguity to allow you to make your own decision about it.

Written and directed by Martin McDonagh, who also did In Bruges. It shares that same offbeat, violent style.  It even has a bit of a noir feel to it.  The dialog is extremly funny, zany and clever. With it's darkly hilarious and bloody, hyper-violence it evokes similarities to Tarantino films. Martin McDonagh is quickly becoming one of my favorite writers and directors, and hope we don't have to wait another 4 years for his next film.

Sam Rockwell has long been a favorite actor of mine, and this is one of his finest performances.  He's brilliantly nutty.  I know comedic roles don't generally get a lot of love at Oscar time, but I think it's worthy of consideration.  I would not be surprised at all to see him get some Oscar or Golden Globe love soon.  Every scene he's in he's just so energetic and commanding.

Colin Ferrell gives another great performance in another McDonagh movie, and is mainly the counterpoint to Rockwell throughout the movie.  It's interesting that the trailer calls Marty 'the seemingly normal one'; keyword there being 'seemingly'.  He's an alcoholic and often does not remember things he did the night before.  Even Billy thinks he needs to quit drinking, but like all alcoholics, Marty doesn't think there's an issue.  He's normal relative to the others in the movie, but not normal compared to 'normal'.

I've always loved Christopher Walken and his deadpan delivery, and this is him at his Walkeniest. What else can I say about him.  Walken is the man!  As the movie progress, you learn more about his dark past and why he's now the 'non-violent' one.  His character is the most sympathetic.

Woody Harrelson also very funny as the mob boss.  He's another actor that seems to be enjoying a career renaissance lately, and he gets to play a character that initially starts out as extremely violent, but then seems shocked by the psychotic actions of those he's dealing with.

Tom Waits also has a great thread as one of the psychopaths.  He answers an add placed by Billy looking for stories for Marty's screen play.  His story doesn't really play a part in the main plot, but it's a great little short story.  There are lots of little short stories throughout the movie that just kind of keep the movie interesting, and gives it an unusual pace.

Although they are listed as two of the psychopaths, Abbie Cornish (who I effing LOVE) and Olga Kurylenko are barely in it, and didn't really fit into the mold of a psychopath.  However, there's another meta part in the movie that explains their roles to a T.

I was a big fan of In Bruges, and McDonagh's Seven Psychopaths is an even better follow up.  It's dark, violent, insane, hilarious and features some of the better performances I've seen this year. This is one of my favorite films of the year and one that I think you'll want to watch multiple times.