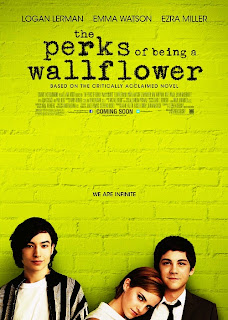 This one is for the misfits...

Charlie (Logan Lerman) is beginning his first day of high school.  He narrates the film through a series of letters written to an anonymous friend.  Despite his sister being a senior, and his older brother being a popular football player, Charlie doesn't expect that he's going to fit in very well and dreads it.  He goes as far as to have already counted out the number of days left until he's done with high school.

On the outside, there's really nothing wrong with Charlie. He's smart, but introverted, kid.  Even he thinks it's pretty sad that his only friend is his English teacher, Mr. Anderson (Paul Rudd).  Mr. Anderson has more of a mentorship role with Charlie, who encourages his reading and to become a writer.  One day, he meets seniors Patrick (Ezra Miller) and Sam (Emma Watson), who he initially mistakes for a couple, but learns there are really step-siblings.  Patrick is an eccentric class clown who is called "Nothing" by his classmates after an old joke, but still embraces his outsider status.  Patrick and Sam introduce Charlie to their circle of friends, and take a liking to him once they realize there's more to him. Sam accepts him into the group by saying, "Welcome to the island of misfit toys."

As Charlie hangs out with the group he comes out of his shell and his confidence grows.  The world kind of opens up for him, going to parties and experimenting with drugs, among other things. This isn't a wild party movie though, it's a realistic look at high school.  It captures all those feelings and events that you remember: being awkward, first love/crushes, being picked on, going to dances and football games.

One thing that caught me off guard was the movie's setting.  You see many exchanges of mixed tapes throughout the film and I thought at first that this was some sort of hipster thing.  I realized as the movie went on that it's actually set in late 80's or early 90's.  Nobody has cell phones and they drive older cars that you'd expect a high school student without a lot of money to drive.  It's done well and doesn't slap you in the face with it's time period.  Plus, I was never bothered that the exact time wasn't clear.  It didn't really matter, as a movie like this feels timeless.

The Perks of Being a Wallflower is a familiar story, yet still told in a way that feels fresh and authentic.  That's due in large part to the great performances.  Everyone in the cast is sympathetic, likable, and not a bunch of high school stereotypes.  There are many things that all of the characters go through that will feel familiar to you.

I've never really paid much attention to Logan Lerman before, but I really enjoyed him here.  He plays the shy, quiet kid so well that you're in his corner right from the beginning.  When you see people be mean to him it makes you mad.  You get excited about his first crush, and when he goes to prom.  You really are along for the ride with him.

While the story is about Charlie, the breakout star of the film is Ezra Miller as Patrick.  If you remember his creepy performance in We Need to Talk About Kevin, this is a complete 180 for him.  As you'd expect as the class clown, he's very funny, but there's more to Patrick than being the clown.  The movie explores that, as well, without it feeling like a thrown in plot point.

It's nice to see Emma Watson moving on from Harry Potter.  She had a small, almost forgotten, role in My Week with Marilyn last year, but has a more substantial role this time around.  Sam is a sensitive, yet damaged young woman who admits her issues with picking the wrong men, and you really feel the vulnerability in Emma's performance.  Plus, I almost forgot Emma Watson was British, as she pulls off a pretty good American accent.

Adapted from his novel of the same name, writer/director Stephen Chbosky wrote a wonderful story.  I can't think of too many times where the writer of a novel ended up writing and directing the movie as well, but it worked here.  Obviously, it's a faithful adaptation, but it doesn't feel indulgent. The movie isn't melodramatic or cheesy, but rather very sincere and realistic.  It's also much funnier that I was expecting without being too indie or quirky.  Just when you think it's going to end, it takes a darker turn and gives you more insight into Charlie's past that makes it all that much more poignant.  I heard many sniffles in the audience in the third act and it was earned, rather than something that was contrived.

The Perks of Being a Wallflower is a very heartfelt and honest look at friendship, first love and finding yourself.  "Perks" is well written, directed and acted.  It's a very nostalgic look at high school, and if you've ever felt shy or out of place I think this will really speak to you.  I strongly recommend checking it out.