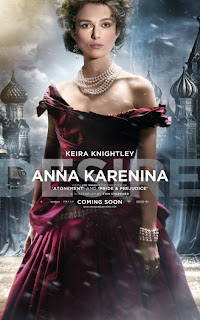 When I try spelling Anna Karenina, I always want to add another 'na' to it.  I have the same problem when I spell bananana.

I have to admit that I've never read the novel by Tolstoy (some dead guy...kidding), or have much familiarity with the story. Sure, I've heard of it, but who hasn't?  Looking at the history, you could call Anna Karenina the Halley's Comet of movies, as it seems to get remade every 10 to 13 years.  Yes, I know Halley's Comet doesn't come that often, but I couldn't think of another occurrence in nature that happened with the same frequency.  Maybe a day will come where people will mark the ages by which version of Anna Karenina they identify with.

Even if you've never seen any of the previous adaptations of Anna Karenina the basic story is one that should feel familiar.  Anna (Keira Knightley) is married to a wealthy politician Alexei Karenin (Jude Law).  He's a little cold, but not abusive, and Anna seems to love their son more than she loves him.  While travelling to help a friend, Anna meets Count Vronsky (Aaron Taylor-Johnson), and it's love at first sight.  They have a passionate affair, but Alexei is no dummy and learns of it.  He wants a divorce, but Anna knows the disgrace this will cause her and that she won't be able to see her son any more.  Everyone becomes aware of her behavior and affair, which makes her an outcast.

After watching Joe Wright's adaptation of Anna Karenina, I have to wonder how faithful it is to the book.  I say this because I'm never given any reason to like the title character.  It didn't seem like her affair with Vronsky was triggered by anything more than making goo-goo eyes at each other at a dance party, which I have to admit the party was the highlight of the film.  Vronsky was even expected to propose to another woman, but one look at Anna and those plans are out the window.  He's this creepy looking guy with a bad mustache, and I just didn't get any chemistry that made me understand why they fell in love so fast.  Plus, Anna came off to me as selfish for wanting to continue her affair, but refusing to get a divorce because of what it would cost her.  I'm not sure if something got lost in the adaptation, or maybe it's that I don't think this kind of material holds up anymore.  Love as first sight seems to be something that you only see in old stories, and getting a divorce really isn't as big of a deal as it used to be.  I mean, when someone gets a divorce, you don't see everyone around her shunning her or ignoring her.  Adultery still isn't cool though.  How's that for taking a stand?

I just didn't connect with anything, and as the movie went on I found it boring.  There were many subplots and characters I cared nothing about, maybe with the exception of Levin (Domhnall Gleeson) and Kitty (Alicia Vikander).  The problem is that they are never the focus of the story, so when the the film comes back to them, it's too infrequent for me to have become that invested in it. Another thing that took me out of the movie was that they open it by telling you that this takes place in Russia, but everyone spoke with a English accent.

It's not all bad though.  It's a well-acted film.  I've always liked Keira Knightley, and I think it's funny how she's become the go-to girl for costume drama's.  She gives a good performance, and I actually think she's an underrated actress, but roles like this don't seem to be much of a stretch for her anymore.  I'd like to see her step out of her comfort zone a little more.  The performance I got the most out of was Jude Law's.  I get the feeling that his character's cold demeanor was meant to make him unlikable, but I could only sympathize with him.  I found him to be very reasonable considering the circumstances.  As much as I liked Aaron Taylor-Johnson in Kick-Ass, I think he might have been miscast here.  He seemed too young to be paired up with Knightley, and maybe a more mature presence might have helped me buy into their romance.  Plus, that mustache bugged the hell out of me, but I know that's not really his fault.

As you'd expect with most period pieces, it's visually striking and the costume design is very detailed.  Many scenes are set on an actual stage, and the sets are built around them as the scene progresses and even transitions to other locations.  You'll see walls and objects move in and out seamlessly.  It was a very interesting way to shoot the film, but at times I found it distracting, especially when you'd see pulleys and ropes as part of the scene.  The set design was great though, and I can't imagine the amount of work that went into setting up shots done in the film.  I can see why they didn't do the whole movie in this style, and I think it would have detracted from it if they had.  In fact, perhaps it was Wright's focus on the visuals that made it so hard for me to connect with any of the characters.

Anna Karenina is a beautiful costume drama, and features some strong performances by the cast, but I came away from this with a cold feeling.  I didn't care about any of the characters, and couldn't connect with it.  I think it's worth watching if you like this type of film, but it's something best left for rental.