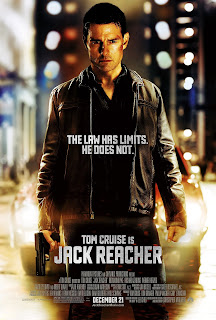 It's interesting to me that just two months ago I saw Alex Cross, a movie based on off a popular book series that was meant to re-launch the character.  I wasn't aware of this before hand, but Jack Reacher is based off a book series by author Lee Child.  The big difference is that Jack Reacher is how you do it right.  This particular story was based off the book "One Shot", and yet another series of books I may have to add to my Amazon Wish List.

In a chilling and effective opening sequence, a sniper opens fire, killing five people.  It's a disturbing image and way to open the film, and then it occurred to me that considering recent events it might be a little too much for some to watch.  It's unfortunate timing for sure.  A former military sniper, James Barr, is captured by the authorities and only writes "Get Jack Reacher" when being interrogated.  Reacher (Tom Cruise) sees the news report about event and shows up on his own. While not much is known about Jack Reacher, we do learn he's a former ace Military Police officer that's been living off the grid.  He partners with Barr's defense attorney Helen Rodin (Rosamund Pike), and they investigate what happened.  They find that this case isn't as open and shut as first believed.

I don't want to get into the plot much more than that, as one of the things I loved about Jack Reacher what how much it surprised me regarding what kind of film it was.  When you watch the trailers, it appears to be a straight-up action flick, but it's much more than that.  There's plenty of action, but it's also a mystery/thriller.  It's also funny in the right places, but that balances out the brutality in the fight scenes.  When I saw brutal though, I don't mean to say it's bloody.  In a later part of the film, you learn more about the victims and it really give the film an emotional depth that surprised me.

One of the things I loved about Christopher McQuarrie's direction (he also wrote the screenplay) were all the little things.  Coming back to that opening sequence, the first 5-10 minutes of the movie have no dialog and the sounds are muted.  It perfectly sets up the story without saying anthing.  Later in the film, there's a great car chase sequence that stood out to me because of the realism about it.  Reacher isn't an expert driver, so you don't see perfectly executed, high-speed turns.  He fishtails, spins out, even crashes a little.  When you contrast this with something like like Taken 2, where you have to believe that someone who doesn't even have their driver license is somehow having little issue driving at high speeds on narrow roads, it really made me appreciate what they did here.  Even in the fight scenes you see use of strategy and tactics.  Granted use of tactics are a large part of Reacher's character, but I liked that the action wasn't mindless.

I can't say it's a totally genius movie though.  One of the issues I had with the movie was that when the villain is revealed, someone known only as "The Zec" (a surprising appearance by director Werner Herzog), his back story is a little too over-the-top and super villiany for what his goal was. He wasn't even in the movie that much, so it seemed a little too much for a movie that otherwise had a grittier, realistic feel to it.  Herzog's creepy performance made the character tolerable though.  The only other issue I had with the movie is that it does run a tad too long, not to the point where you're getting bored with it, but it would have benefit from being tightened up a bit.

Just when I'm ready to write Tom Cruise off, he reminds me why he's the superstar he is.  Cruise doesn't physically resemble the character as written, which may upset fans of the book series, but he owns the role.  Cruise's Reacher plays off everyone well, whether it's Helen, or a local detective (David Oyelowo).  I've always enjoyed Rosamund Pike as Helen, but I think you'll notice there's a certain part of her anatomy that's a little distracting.  Those two were the uncredited stars of the movie for sure.  Richard Jenkins has a small role as the prosecuting district attorney (who's also Helen's father), and is great as always.  Lastly, Robert Duvall shows up to class the joint up. Everyone plays their parts well, but this is definitely the Tom Cruise show.

Whether I was just in really good mood when I saw this movie, or it appealed to my basic instincts, I loved the hell out of Jack Reacher.  It's a thrilling crime drama, with good action and moments of odd humor.  Tom Cruise anchors the film with another star performance, and he shows he still has 'it' even though he's north of 50.