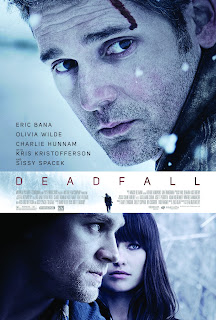 A getaway after a robbery goes wrong.  Oh but wait, there's snow!

After a casino heist, siblings Addison (Eric Bana) and Liza (Olivia Wilde) get into an accident while making their getaway.  Even though they are in the middle of a snowstorm, they decide to split up (always a good idea) and reconnect later.  I've always wondered, why split up, if the goal is to meet up later?  Aren't you increasing the chances that one of you is caught or that something will go wrong?  Anyway, as this is going on, ex-con Jay (Charlie Hunnam) is headed home, but also runs into difficulty along the way.  Paths cross in the movie Deadfall, which could have been renamed Amazing Coincidences.

Yes, amazing coincidences are key in this movie directed by Stephan Ruzowitzky.  This wouldn't have been so bad, if Zack Dean's script wasn't also so cliched and predictable.  It's disappointing because it actually had an interesting beginning, and there are moments here and there where you think it might do something different, but there weren't any twists or surprises.  As a result, there is no suspense at all.  The mistakes made by the characters are so obvious or telegraphed that I had a hard time believing they were capable of robbing a casino in the first place. As the movie opens, Liza is counting a pile of money in the back seat of a car.  They all thought this was a good idea?  To have money out in the open of your getaway car.  Then both the driver and Addison turn around to talk to Liza in the middle of a snow storm, and you can't help but think someone should be keeping there eyes on the road.  WHAM!  A deer hits the windshield and the car flips.  Stuff like this continues throughout the film.

Even the supporting characters had my rolling my eyes.  We're introduced to the local sheriff (Treat Williams), and he was a bad, sexist stereotype.  He refuses to give a female officer an assignment, and you think it's because he's trying to keep her down, but then you find out she's his daughter (Kate Mara).  So then you might think he's being protective, right?  Nope, he continues to berate her throughout the film for being a screw-up (despite her passing an FBI entrance exam), and you get the feeling the real issue is that he wishes he had son instead of a daughter.  It's an awful character that I have a hard time understanding why he was written this way, since it wasn't essential at all to the plot.  Oh, and the kicker is that he ends up shooting his daughter on accident.  Idiot.

It's really not even an issue with the performances, as we're working with a good cast, but it's more how the characters were written.  Addison is initially portrayed as a criminal that appears to have a code, but then his character takes a turn at the end that makes him completely unlikable.  Plus, they appeared to throw in some implied incest angle between the two of them that wasn't fully explored, but just added to the creep factor.  I really like Eric Bana, and I think he tried to do the best with what he was given.  I also liked Olivia Wilde for a change.  Normally she seems to get these smaller roles where she's wasted, but I actually thought she got a chance to act a little and show some charisma that I'm not used to seeing from her.  I didn't mind Charlie Hunnam's performance either, but I found his voice kind of distracting.  I thought it might have been because he was doing an American accent, so I looked it up and sure enough, he's from the UK.

The two people I thought were wasted here were Sissy Spacek and Kris Kristofferson as Jay's parents.  I wished the movie had focused on them and their relationship with Jay more.  They try to setup a overly complex relationship between them, but it all just kind of gets glossed over in favor of the main story.  Jay, a former boxer, was trained by his father, who's also a retired sheriff. They had a falling out after Jay blamed him for only getting the silver medal in the Beijing Olympics. Also, it's never really clear why Jay was in prison.  Something about him throwing a fight, but I'm not sure why he was in prison for that.  Do you see what I mean here about it being needlessly complex?

Speaking of unnecessary, the movie features two sex scenes between the same characters only about five minutes apart.  The first one does something that's kind of a pet peeve of mine in that you have two attractive, fit people having sex with their clothes on.  When you consider that Jay just got out of jail and this is the first action he's gotten in a while, you'd think he would've been tearing clothes off to see a woman naked.  The movie seemed to recognize this mistake, too, as in the second sex scene, they are both nude.  So, why not just edit out the first scene then?  It just kind of struck me as odd.  I'm sure they figured it was a tough sell to convince us these two connected emotionally in just 24 hours, so they just show them having sex again, because sex means they are in love.

Deadfall is a tepid thriller full of cliched characters and a telegraphed ending that provides no impact or satisfaction.  It's a nice looking film and the performances are fine, but the story is all over the place.  This one has 'wait for cable' written all over it.