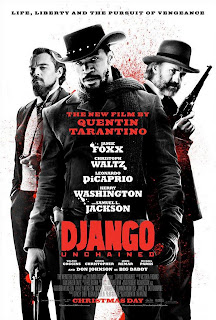 A former dentist turned bounty hunter, Dr. King Schultz (Christoph Waltz), is in pursuit of a trio of slave trading brothers.  He frees a slave named Django (Jamie Foxx), as Schultz believes Django can help identify the brothers. The unchaining and the adventure begins.  Django and Schultz hit it off and Schultz takes a special interest in Django once he tells him the story of how he was separated from his wife Broomhilda (Kerry Washington). Schultz makes a deal with Django to become his partner in bounty hunting for the winter and then he'll set Django free and help him find Broomhilda.

I'm often reminded of another tale of a bounty hunter named Jango, who was a simple man just trying to make his way in the universe.  I don't recall what happened to Jango, but I heard he lost his head over something a long, long time ago.  I heard Samuel L. Jackson was somehow involved.

Back to the unchaining.  They eventually track down Broomhilda, and learn she's been purchased by a plantation owner, Calvin Candie (Leonardo DiCaprio).  They travel to his plantation, Candieland, to free her.  I hear Candieland was located next to Chutes and Laddersville.  Here's where the movie got a little odd for me, as their plan to free Broomhilda seemed needlessly complex.  When their plan is uncovered Candie still agrees to sell Broomhilda and seemed more upset about their deception.  I thought this was the one real weakness of Quentin Tarantino's story.

Another issue was the massive use of the 'n word'.  I expected to hear it from time to time considering the period and subject of the film.  I figured that's how slavers spoke, but it's said like every other second and by just about every character.  I can see this being really offensive to some, especially when it's used for comedic effect.  It was kind of shocking to hear it said, but then it's said so much that you almost become desensitized to it, which isn't a good thing.

The good news is that Django Unchained has that brutal, over-the-type violence you've come to expect from Tarantino.  One of the things I really appreciated about this was the lack of CG blood. It just has a better feel and I have a more visceral reaction when they use blood packs, and believe me, they use a lot of them.  It's the one area where I wish filmmakers would abandon use of computer animation.  Tarantino also understands how to use the anticipation of violence to build tension.  The longer the movie goes on, the more you keep expecting something to happen suddenly.  There's a great scene near the end of the film with Leonardo DiCaprio where the whole time I was expecting something to explode.

You also get much of Tarantino's off-kilter humor throughout the film.  Despite the overuse of the 'n-word', Tarantino is still a great dialog writer, which has always driven his films.  There's great chemistry between all of the actors.  Christoph Waltz is fantastic!  In relatively short period of time, Waltz has become one of my favorite actors and I love watching how much fun he he's having with role.  Dr. Schultz a flair for the dramatic, and you see he even has a code he follows.  I was kind of worried that Jamie Foxx was going to be the weak link, but he played off Waltz well and I really enjoyed the character.  I feared he was just going to try to play a bad-ass without any nuance about it, but turns out I haven't been giving him enough credit as an actor.  Leonardo DiCaprio infused some life into the second half of the film with his awesome portrayal of Calvin Candie.  He's a mustache-twirling villain if I've ever seen one.  There's never a moment where you don't see that he's a sick, evil man.  It's always more entertaining to watch a film when you can tell all the actors are really into their roles and having a blast with them.

It's interesting to me how a lot of Tarantino's films are tributes older film styles.  He clearly wanted make an old fashioned spaghetti western, and at times that's exactly what it is, just with Tarantino's flair.  I always look forward to seeing what genre or era he's taking on next.  Another recent trend of his is that the length of his films are coming dangerously close to getting out of control.  I didn't mind the length of Django Unchained, since I was entertained the whole time, but there were certainly scenes here and there that could have been removed or tightened up.  At 165 minutes, it felt like he either needed to cut it down, or split it into two films like he did with Kill Bill.

Whether you're a fan of old westerns or Quentin Tarantino, you should enjoy Django Unchained. It's definitely a little too long, and some might find it offensive, but if you can get past that, it's a fun ride with great performances and the type of humor and violence you've come to expect from Tarantino.  I strongly recommend checking it out.