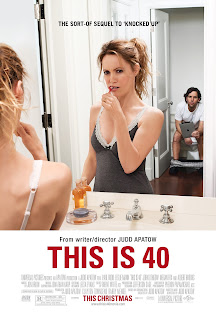 Was the working title of this film "This is Misery"?

I say that because if there was ever a movie where I felt the message they were trying to tell me that marriage and having kids is a miserable experience, it would be This is 40.  Billed as the "sort-of sequel to Knocked Up", we catch up with Pete (Paul Rudd) and Debbie (Leslie Mann) a few years after the events of Knocked Up.  I thought it was odd that there was no cameo from either Katherine Heigl (you do see a picture of her on the wall though) or Seth Rogen, which seemed like a missed opportunity. Granted Heigl is probably on Judd Apatow's shit list after what she said about Knocked Up, but Rogen is still in Apatow's camp.  Also, as the movie centers around the relationship with their families and their 40th birthdays, it seems odd that known family members would have no mention or involvement in the film.

One of the biggest issues with This is 40 is that there's really no plot at all.  It's the Seinfeld of movies in that it's a movie about nothing.  You're just watching a short snapshot of these people dealing with their issues.  The other odd part was that the movie takes place over the course of a single week.  I only know this because the movie begins with Debbie's birthday, and they say Pete's birthday is in the same week (the film ends with Pete's birthday party).  Despite the short time frame of the film, I felt like I watched several months of their lives.  At one point you see their living room and notice there's a Christmas tree and wonder how much time has passed.  Were we in December the whole time?

Even with no plot and only a week elapses, I felt like there was too much going on and too many side characters.  How many issues do these people have?  You're watching Pete deal with the lack of success of his independent record label, and how that's causing financial strain he hasn't shared with Debbie.  Debbie owns small boutique store that seemed to have huge sales numbers, and they are alerted to a missing twelve thousand dollars, but didn't have any urgency over finding where it went.  This leads to a side plot involving an unnecessary Megan Fox and Charlyne Yi. Their oldest daughter Sadie (Maude Apatow) for some reason has a fascination with Lost even though that's been off the air for a few years, and never stops yelling.  There's a side plot involving the mother of a boy (Melissa McCarthy) after the boy and Sadie have a Facebook fight.  Debbie is dealing with the resentment she feels towards her absent father (John Lithgow), and Pete's father (Albert Brooks) has been guilting them into lending him money constantly.

In typical Judd Apatow fashion, the film is way too long and really needed to be cut down.  I don't understand why a movie with no plot needed to be over two hours.  Don't get me wrong, I don't mind a long movie, and I normally love Judd Apatow's style, but this is the first of his films where I really felt the meandering length of the film.  It just kind of ends without any resolution to any of their issues, and it doesn't cover enough time in their lives to show any growth of the characters.

Don't get me wrong, it's not all bad.  There are many hilarious moments, but the movie was arranged where all the laughs came in blocks or montages of funny scenes.  When there aren't laughs though, everyone is fighting and yelling and nobody seems happy.  Katherine Heigl had a complaint about Knocked Up where she said, "It paints the women as shrews, as humorless and uptight, and it paints the men as lovable, goofy, fun-loving guys,"  After watching This is 40, I have to say I understand what she was saying.  I couldn't help but think that Debbie was always bitching and shrill, where Pete was always made to look like a nice guy.  I find it odd that Judd Apatow would make a movie about marriage and family life that paints it in such a negative light and cast his own wife and children in the movie.  I hope he's not making a commentary about his own personal life.

For the most part the performances are all fine, even if I didn't necessarily love the characters. Paul Rudd and Leslie Mann are good as the leads and do the type of work you normally expect out of them.  I actually got more out of a lot of the supporting characters, even though there were too many of them.  I thought Albert Brooks was funny every time he was on screen.  Melissa McCarthy had the funniest moment of the film (stay for her scene during the credits).  Jason Segel has a good sequence involving Chris O'Dowd and Megan Fox, but again, many of these characters just seemed unnecessary or underdeveloped.

This is 40 is an uneven and overlong film.  It's a mixed bag of funny or insightful scenes, but then times that make you never want to get married or have kids.  If you're a Judd Apatow fan, I think it's worth a watch at some point, but save it for rental.