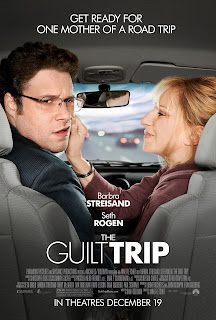 I think the moral of the story is that if you're mean to your mother, you look like a dick.

Andy (Seth Rogen) has invented a new cleaning product that he's having difficulty selling.  He's about to embark on a cross-country trip to pitch his product to several different companies.  He begins by returning home to see his mother, Joyce (Barbara Streisand).  In the short interaction before the trip, you learn that Joyce hasn't dated since Andy's father died when he was 8.  She also reveals that she had a love interest before she married her father.  Andy tracks this mystery man down and figures a way to fit a visit to this guy while on his trip.  He invites his mother along, which already kind of contradicts the title of the film, as I never felt like he invited her out of guilt or that she guilted him into coming along.

The actual 'Guilt Trip' begins and then the movie became tedious to watch.  I was squirming in my seat and was actually considering leaving, which is something I don't think I've ever done.  It wasn't insulting, but there was barely a laugh to be had and there wasn't anything particularly interesting about it.  The first half of the movie kind of hinges on setting up Joyce as a nagging and overbearing mother, and while her character is as cliched as they come, you don't have any reason to dislike her. So then your focus turns to how Andy's behavior towards his mother really doesn't make him all that likable. Andy craps on any suggestion Joyce gives him even though it's clear to everyone she's right.  It's not very entertaining to see him be extremely inflexible and rude when she's just basically being a normal Mom.

To The Guilt Trip's credit, there's a scene about halfway through the movie that changes the course and tone of the film.  From that point on it actually got funnier and I started to enjoy it more, as well as sympathize with everyone a little bit.

As I mentioned, one of the main issues of the film was that there weren't any laugh-out-lout moments.  Even a small chuckle here or there would have been nice.  The sad part is that Rogen and Streisand had good chemistry, but lacked the kind of banter that really would have driven the movie, pardon the pun.  You'll really notice this during the credits when they show you a series of deleted scenes that did show exactly that.  It also didn't help these scenes got the biggest laughs from the audience.  It's a shame and it illustrates what a missed opportunity The Guilt Trip had to really be a good comedy.  The supporting cast is also wasted in that they have several comedic actors (Casey Wilson, Adam Scott, Ari Graynor) in straight roles with barely any dialog.  I'm not sure why you'd go through the trouble of getting funny, recognizable actors and then not use them at all.

I'm surprised they decided to roll this out a week before Christmas, as there's nothing holiday-themed about it at all.  The performances from the leads, while not bad, aren't exactly going to blow you away either.  I actually enjoyed Streisand, and I can't really call myself a fan of hers.  The film does wrap up nicely and has some heartfelt moments towards the end, but the first half of the movie doesn't have a strong enough setup for those scenes to really have much of an emotional impact. You've seen many other movies do a better job with similar family themes.

I'm kind of surprised with how this turned out, because director Anne Fletcher had a fairly modest hit with her last film The Proposal.  Writer Dan Fogelman has written movies like Bolt, Tangled, and Crazy, Stupid, Love., so he's got a pretty good track record as well.  I even hear he based the story off a real-life trip he took with his mother from New Jersey to Vegas.  You'd think drawing from experiences would give the film a more personal feel to it, but it's about as generic as they come.

The Guilt Trip is a harmless, but formulaic and forgettable film.  It wastes a good cast by not having any significant laughs, and doesn't have enough heart to warrant seeing this over the holidays.  You can save this one for rental.